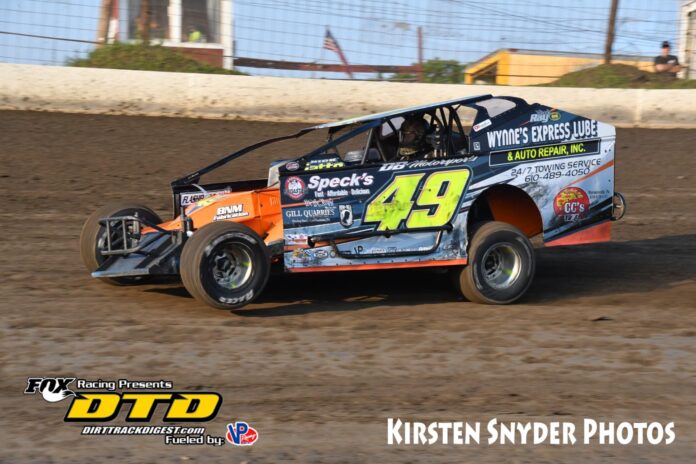 BECHTELSVILLE, PA – Ryan Lilick, behind the wheel of the Dennis and Debbie Becker-owned No. 49, avoided all accidents in the caution filled 30-lap 358 NASCAR Advance Auto Parts Weekly Series T.P. Trailers Modified feature on Saturday night at Grandview Speedway to score his first career victory in the division. Prior to switching to the Modified division a few years ago, he had won seven Sportsman features.

The T.P. Truck Equipment 25-lap Sportsman feature was also marred with several cautions. At the conclusion defending champion Brian Hirthler put the Green Lane/Wm. Penn/4-Star Lettering mount in victory lane for his fifth win of the season by a comfortable margin over runner-up Jimmy Leiby.

Bobby Gunther Walsh led the early laps of the Modified feature once it got underway after a backstretch tangle that brought out the red since the track was blocked before any laps could be recorded.

The yellow came out again on the fourth lap when Jeff Strunk was in the third turn wall and had a right and left flat tire and Kevin Hirthler sustained a left front flat tire. Strunk was through for the night, but Hirthler continued. Gunther Walsh continued his pace on the restart with Ron Kline putting in his bids for the lead.

On the seventh lap restart caused when Cory Merkel stopped in the third turn, Kline, the 2005 Late Model point champion, took to the outside lane and charged into the lead. Lilick followed through for second at the same time to pressure him.

A multi-car fourth turn mishap on the 12th lap brought out the yellow. On this restart Lilick charged to the front of the pack followed by Brad Grim, Doug Manmiller, Craig Von Dohren and Kline. Trying to break into the top five was Brett Kressley, who was involved in the opening red that sent him pit side. He was able to rejoin the rear of the field when he returned.

The final caution was with 10 laps to go after Jesse Leiby got into the wall between turns three and four. Before the race went green again Brad Brightbill, last week’s feature winner, dropped out of competition. The running order behind Lilick on the restart now consisted of Manmiller, Von Dohren, B. Grim and Duane Howard.

Lilick never looked back once he became the new leader, but he kept a watch on the scoreboard so he knew who was running where. The finishing order certainly changed as Kressley was on the move and finished second followed by current point leader and defending champion Von Dohren, Manmiller and Howard. Rounding out the top ten were B. Grim, Mike Lisowski, Kline, Justin Grim and Brad Arnold.

Polesitter Colten Perry took the early lead at the wave of the green in the Sportsman feature trailed by B.J. Joly, coming off from a win in the Outlaw Sportsman Vintage feature at the track the previous night; Adrianna Delliponti, Joey Vaccaro and Tyler James.

Lap 13 was a lucky one for Joly as he was able to overtake Perry to become the new pacesetter.

Jimmy Leiby took over second on the 15th lap to challenge Joly, but the next time around Hirthler was in the runner-up position.

Perry spun between the first and second turn bringing out the yellow on the 17th circuit. On the restart Hirthler and Leiby were one and two with Joly, current point leader Kenny Gilmore and Vaccaro now third through fifth.

In no time Hirthler had a comfortable lead built up and continued to claim his 12th career win. Following him across the line were Leiby, Gilmore, Dylan Hoch and Joly. Sixth through tenth were Ryan Beltz, Vaccaro, Dakota Kohler, Tyler James and Chris Esposito.

Heats were won by Cole Stangle, Vaccaro and Delliponti. Beltz won the consi.

The final NASCAR Advance Auto Parts Weekly Series point standings will be decided on Saturday, September 11, with the running of the Hope Mortgage Team Championship Night for Modifieds and Sportsman. And there will be a fireworks display to go with the expected fireworks on the track. It will all get started at 7:30 p.m.

Zach Curtis led one lap of the Midget feature before Kunsman motored into the lead on the second lap followed for second by Brett Wanner.

At the half-way point, Kunsman was first, but now Buckwalter was in second in pursuit of the leader.

Kunsman’s sizeable lead was erased when Steve Craig slowed in the second turn for the only caution on lap 15.

The last five laps Kunsman and Buckwalter ran side-by-side battling for the lead. Buckwalter overtook the lead on the white flag lap, but coming in for the checkered Kunsman made a bold move to regain control as the pair crossed the line by a mere .012 seconds difference. Wanner was third followed by Kevin Woody, Curtis, Mike Markey, J.R. Booth, Shannon Mousteller, Craig and Mark Sokol.

Buckwalter and Kunsman were the heat winners.