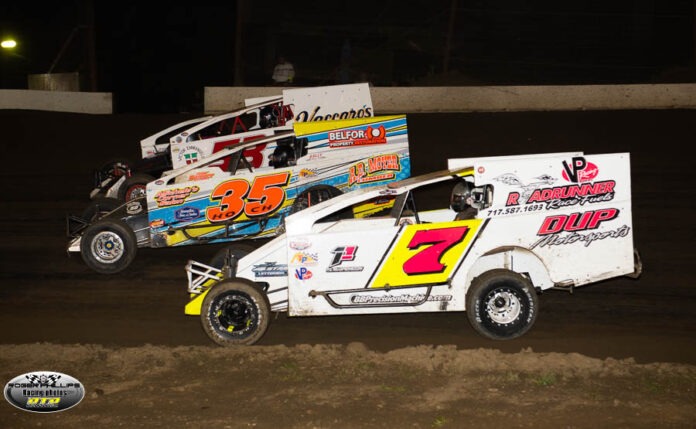 BECHTELSVILLE, PA – The NASCAR Modified and Sportsman Championships will be decided at Grandview Speedway this Saturday, September 11. And The Hope Mortgage Team of Conshohocken has made the Championship Night even more interesting by adding $5,000 in prize money plus providing a fireworks show.

Eleven time and defending T.P.Trailers Modified Champion Craig Von Dohren holds the top spot in the standings with 4843 points after 18 races, all part of the national Advance Auto Parts Weekly Racing Series, have been run. Brett Kressley, who led the standings for much of the season, is very close behind with 4696 points. The title is Von Dohren’s to lose with an off night and Kressley’s to win with a strong finish giving him his first Modified championship. Third spot belongs to Jared Umbenhauer with 4312 points. Doug Manmiller has had some impressive efforts in recent weeks including a victory giving him 3967 tallies. And in fifth is five time champion Duane Howard with 3934 points.

Popular racing talent Kenny Gilmore sits on top of the T.P. Truck Equipment Sportsman standings with 3643 counters looking for his first title. Dylan Hoch has had a strong effort in recent weeks and has tallied 3510 points putting him in a strong second place. Defending champion Brian Hirthler is third with 3410. Jimmy Leiby holds on to fourth with 3105 counters and in fifth is Kyle Lilick having accumulated 2984 points.

Thanks to Hope Mortgage there will be many cash awards. Topping the list of awards will be $1,000 going to the winner of the 30-lap Modified feature making for a total of $3,800 including track prize money and $300 from T.P.Trailers of Limerick, PA.

The winner of the 25-lap Sportsman feature will receive $1,000 from the Hope Team along with the regular prize money and $200 from T.P.Truck Equipment for a first place offering of $1,800.

Heat winners in each division of competition on the Hope Mortgage Team Championship Night will receive money based on the number of qualifying events run.

And five non-qualifiers in each division, randomly selected, will receive $100 of the Hope Mortgage Team money.

THOSE WITH CAMPERS PLEASE NOTE. Campers can enter the speedway grounds on Saturday September 11 and have the camper remain on the grounds until the 19th. However, because there are no hookups, sleeping in the campers can only take place on Saturday, September 18th to the 19th.

Coming up on Friday, September 17th, is the Freedom38 Sportsman race which will reward the winner with $2,000. That night will see action get the green at 7:30 p.m.

On Saturday night, September 18th, the 51st Annual Freedom 76 will feature many of the outstanding talents in dirt track Modified racing trying to take home the $30,000 jackpot. As is normal it is expected that there will be outsiders entering the classic event hoping to take home the big bucks. Racing starts at 7 p.m.

Full info on the weekend of racing, including camping information, is available at www.grandviewspeedway.com or telephone 610.754.7688.

* denotes feature win (Feature wins listed are only for those that are NASCAR point events.)