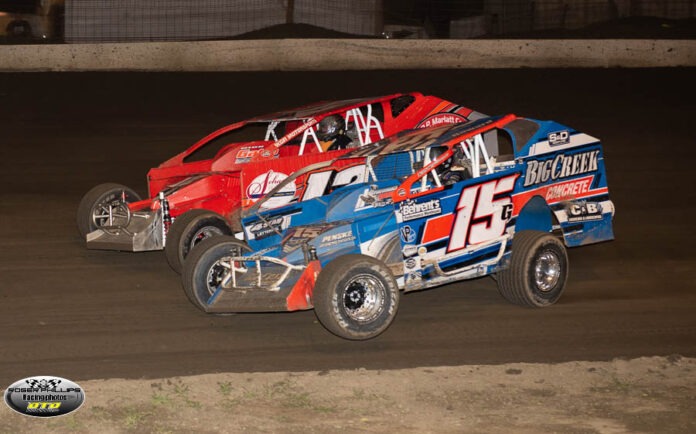 BECHTELSVILLE, PA – Former Grandview Modified titleholder Duane Howard put the Butch Getz-owned No. 15G into the lead on the 14th lap of the 30-lap 358 NASCAR Advance Auto Parts Weekly Series T.P. Trailers feature on Saturday night at Grandview Speedway in the race activities sponsored by Hope Mortgage Team and went on to chalk up his second win of the season. He drove the Bicknell chassis which is his normal mount for Friday night that he feels comfortable with. Howard thanked the entire team for all their support and not being a quitter.

Howard collected quite a hefty pay as he received a total of $3,800. $1,000 was from Hope Mortgage, the track prize money and $300 from T.P. Trailers of Limerick and also the Dan’s Deli ½-Hoagie bonus award.

Lex Shive picked an appropriate night to win his first career T.P. Truck Equipment 25-lap Sportsman feature. It was his race sponsor Hope Mortgage night for a $1,800 payday which included $1,000 from Hope, $200 from T.P. and the regular prize money.

Howard and Shive may have won the features, but Craig Von Dohren was crowned the Grandview 2021 NASCAR Modified point championship for the 12th time. All season long he swapped leading the points with Brett Kressley who led it for quite some time and had an advantage when Von Dohren didn’t finish well, but then Von Dohren gained ground when Kressley suffered setbacks. Kressley continued to fight back to remain in the hunt.

Kenny Gilmore, who has raced Modifieds and Sportsman for 26 years at the speedway, earned his first career NASCAR Sportsman championship over runner up Dylan Hoch.

Ron Haring Jr. led nine laps of the Modified feature before the red was thrown after a third turn multi-car tangle in which Craig Whitmoyer flipped. The safety, track officials and tow truck crews put Whitmoyer’s car back on all 4 wheels, he drove it back to the pits, did extensive sheet metal and body work and came out again. He completed more laps until pulling out of competition after a few more laps. On the restart Funk III charged into the lead trailed by Jordan Henn, Howard, Timmy Buckwalter and Jeff Strunk while Haring Jr. started to go toward the back.

Howard took over second on the 13th lap and one lap later he was setting the pace.

Behind Howard the battle for positions developed between Buckwalter, Strunk, Kressley and Henn.

With five laps to go, Strunk and Kressley were in a heated dual for second which allowed Howard to open more distance. Back further Buckwalter and Von Dohren completed the top five.

Once Howard took control, he continued to show the way until he pulled into the winner’s circle for his 80th career victory. Chasing him across the line were Strunk, Kressley, Buckwalter and Von Dohren. Jared Umbenhauer, Henn, Kevin Hirthler, Mike Lisowski and Funk III completed the top ten.

Eric Biehn, Funk III and Henn were the heat winners worth $166 from Hope Mortgage. Ryan Grim won the consi. Also courtesy of Hope Mortgage, Von Dohren earned an extra $100 for the Hard Charger while Whitmoyer got the $100 Hard Luck bonus.

These same drivers plus a host of others will take part in the 51st annual Freedom 76 on Saturday, September 18 with $30,000 plus lap money available along with other perks which will include $760 from Bobby Gunther Walsh and his sponsors for the Hard Charger, $1,000 to win the GT Radiator Repairs Cash Dash, and the Schaeffer Racing Minuteman 20. The Lynn Himes Great Effort award of $100 will be presented to the highest finishing driver not in the top 10 Grandview points. All action is set to get underway at 7 p.m.

In the T.P.Truck Equipment Sportsman feature Tyler James led for four laps until he got high in turn two and almost hit the wall relinquishing the top spot to Bryan Rhoads.

On the 18th lap Vaccaro was spun in the third turn by James in which James was sent to the rear. The restart was void as Young spun along the backstretch.

When action resumed Shive charged into the lead and immediately started to pull away as he was motivated the entire evening.

Earning an additional $166 for heat wins were Mike Stofflet, Young and Rhoads. The consi was won by Jimmy Leiby.

Hoch was the Hard Charger while Vaccaro received the Hard Luck award which both were worth an additional $100.

The Sportsman drivers used this race as a warmup for the Friday, September 17 Freedom 38-lap race which will attract other drivers for a $2,000 payday.