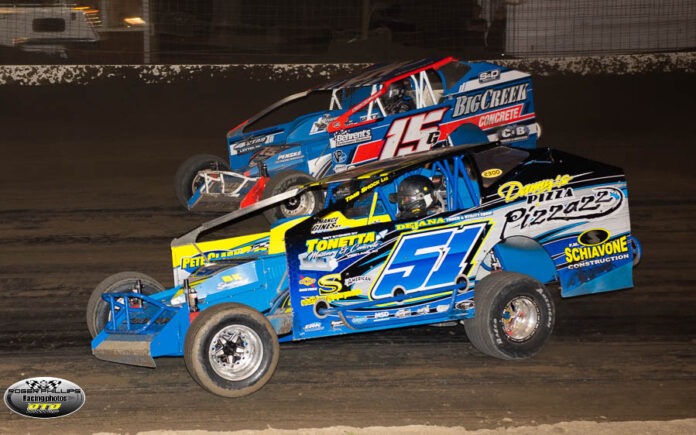 It’s the middle of September and it is time for the Granddaddy of races at the Grandview Speedway as the Rogers Family presents the annual Freedom 76. This will be the 51st running of the classis race set to take place on Saturday Sept 18th. The “Sixer” is a must-see event which brings out the best of the best in the New Jersey / Pennsylvania world of small block racing.

TV Streaming: Provided by DirtTrackDigest.tv via pay-per-view. PPV Cost will be $49.99

Unfortunately, this year’s Freedom 76 race is up against another couple of big races which will take place in New York which will limit the amount of NY invaders that usually make the trek south to compete. However, there will still be a very good turnout of top-notch drivers all looking for the 30K top prize along with bragging rights.

Jeff Strunk – How can you not include Jeff Strunk?  He’s the all-time leader in 76er victories with a total of eight wins. Strunk has not only won the event eight time but has also won the three highest paying 76ers including the big $50,000 to win race. Strunk has one win this year at Grandview and finished top five in points and is a master of this race. Strunk will be aboard the Dave Zubikowski owned Zubi’s Racing No. 88.

Craig Von Dohren – Although Von Dohren has not won as many Coalcracker races as you might think being that he is the all-time leader in wins at Grandview along with winning the most championships you can never ever count him out. Von Dohren has won the 76er five times with his last win coming back in 2015 when if I am correct CVD won the triple crown at Grandview which consists of the Forrest Rogers Race, the track championship and the 76er. Von Dohren is two for three so far this season and will be looking to once again win the triple crown aboard his own No. 30.

Duane Howard – 2021 has not been the season Howard and new car owner Butch Getz expected when the teamed up together this year for action at Grandview but nonetheless it was a season most drivers would gladly take. The team came out of box quick in winning the Bruce Rogers Moneymaker Race back in April and has collected two other wins this year at Grandview along with a top five in points. Still, both driver and owner want more, and nothing would cap off their year at Grandview with a big win in the 76er. Howard is a master at long races having won the prestigious 76er five times. Howard will be aboard the Getz No. 15G and will be a factor.

Brett Kressley – Brett “The Threat” is on the verge of winning this race. Kressley has been extremely fast all year long with multiple wins and battling with Von Dohren all season long for the track championship. Kressley finished the year with a couple of not so good races which allowed Von Dohren to squeak out the title but there is not doubt at all who had the fastest car all year long at Grandview. Kressley will be aboard the Kressley family-owned No. 19K and will be a contender on Saturday.

Doug Manmiller – The “Handler” has never been able to grab a win in the 76er but is a consistent runner every season and has many top finishes in the big race. It would be no surprise at all to see Manmiller in victory lane on Saturday night. Manmiller will be driving his familiar No. 44 owned by Jason Miller

Jared Umbenhauer – Umbenhauer is a driver that would not surprise me at to win on Saturday. The “Richland Rocket” has been very fast all year long. Unfortunately, there has been too much adversity along with way with wrecks and DNF’s. Umbenhauer will strap himself into the Kevin Miller owned No. 19 this weekend.

Kevin Hirthler – Hirthler is a driver who intrigues me. The Green Lane, PA wheelman is either on it and contending or struggles big time. When he is on it, he is fast and can be a contender. It is hard to tell what Hirthler will show up on Saturday. Hirthler will be behind the wheel of the family-owned No. 117.

Danny Bouc – Bouc will be racing his own No. 32 this Saturday instead of the Norm Hansell No. 357. Bouc was involved in a huge wreck two weeks ago in the No. 357 and the car was damaged beyond repair. Bouc has learned a lot this year racing weekly at Grandview and has picked up two wins over the course of the season which is quite an accomplishment for a driver who has never run Grandview on a regular basis.

Ryan Watt – It is hard to call Ryan Watt an invader since he lives only minutes from Grandview. However, Watt calls Bridgeport Speedway his Saturday night and only races GV for special races. Watt has had many good finishes in the 76er and would like nothing better to take that big money home on Saturday. Watt will have a brand-new Ron Roberts No. 14W Bicknell car ready to go for Saturday.

Bobby Varin – Varin has always loved coming down to Grandview every year to run the 76er and is usually a contender. There is just something about the track that suits Varin which leads to success. Once again, this year, Varin will be driving the Tom Umbenhauer owned No. 5 car. This car has been super-fast in the few races it has ran in 2021 which Umbenhauer’s son Jared having wheeled it to victory earlier this season at a Thunder on the Hill race.

Billy Pauch Jr – The 76er is a race that Pauch always circles on his calendar and is a bucket list race for him. There is nothing more that Pauch would like to do than to have his name etched on the trophy like his father has so many times. For this race only, Pauch Jr will be behind the wheel of the Norm Hansell No. 357 car that Max McLaughlin has wheeled this year. McLaughlin is committed to race this weekend in New York, so Pauch was asked to wheel the potent car for this weekend.

Dan Creeden – Creeden has informed that he plans on making the trip down on Saturday for the 76er. Coming off a championship winning effort at Accord last week, Creeden hopes to continue that success on Saturday

Mike Maresca – Although not confirmed, I have heard that Maresca will be in the field on Saturday. Maresca will either be driving his own No. 7MM or will pilot the backup No. 117 of good friend Kevin Hirthler.

Dominick Buffalino – The Sayreville, NJ driver hasn’t turned many laps over the years at Grandview, but he will be in a car that has not only turned many laps at Grandview but has also won multiple championships and multiple 76ers including last year’s race with Jeff Strunk behind the wheel. Of course, I am referring to the iconic No. 126 owned by Glen Hyneman. Buffalino has looked very strong in the past few weeks posting a runner-up finish at Big Diamond in the Coalcracker 72 only two weeks ago.

Ryan Godown –  The “Ringoes Rocket” will be in attendance this weekend driving the Danny’s Pizza Pizzazz No. 51. Godown had multiple wins over his career at Grandview including a Thunder in the Hill win earlier this season. Expect Godown to be in the mix.