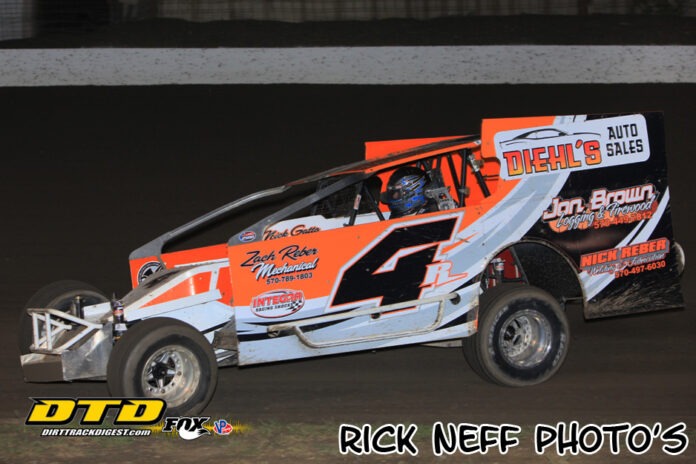 The 28-year-old Kutztown, PA resident started from the pole position in the 27-car starting field by luck of the draw prior to the race and was never seriously challenged after taking control of the race with a wave of the initial green from the track starter Ray Kemp. Henn remained on top from the green to the checkered and picked up his second career Sportsman triumph at the track and first-ever Freedom 38 win.

“I came close in this race in the year I won the championship (in 2016) and wound up finishing in second that night,” mentioned Henn. “I lost the win in lapped traffic and I wasn’t about to let that happen again. Starting on the pole it was huge because the bottom was the place to be. Starting up in front I just had to run my line, stay smooth and make it to the end.”

With the initial green it was Henn powering out in front with third-starting Mark Kemmerer taking the runner-up role and fifth-starting Brad Brightbill running third. By lap 5 Henn held a safe advantage and a circuit later was nearly a full straightaway ahead. With 10 complete, Henn began getting into heavy lapped traffic, but lap 12 saw the caution waved when Steve Young lost a rub rail in turn one, bringing the field back together again.

When racing resumed Brightbill got out of shape in turn 1, collecting seven other cars in the process to bring out the yellow once again. Craig Whitmoyer was sent to the rear for aggressive contact, which caused the eight-car pile up.

Back to the green and Henn easily pulled away with Kemmerer, Dakota Kohler and Kyle Smith in tow.

On lap 15 it was caution again due to a three-car tangle on the backstretch, which regrouped the field once again.

“I wasn’t really happy with the early cautions because I didn’t want to get caught running up on the top with all my momentum going away, but everything worked out,” explained Henn.

The new green again showed Henn out in front over Kemmerer, Smith, Kohler, Steve Davis and Kevin Hirthler. After 18 tours of the high-banked third-mile clay covered oval Hirthler was now up to fourth, after starting twenty-second, and Davis was in fifth, after starting the race in twelfth. At halfway Davis passed Hirthler, however, after 22 circuits it was Hirthler reclaiming fourth and Davis falling back to fifth.

On lap 23 Hirthler moved by Smith to take third and a lap later Davis followed into fourth.

With 26 complete, the red flag was waved as Whitmoyer got tangled up with Brandon Edgar and wound up rolling over in turn 1. Everyone walked away from the crash, with Brian Hirthler sent to the rear for contact that caused the crash.

“I could see on the scoreboard that Hirthler was working his way through the field and my only opportunity was not make a mistake and stay out against the guardrail,” revealed Henn.

“The track was smooth and wide and you could pass on the top or the bottom and that’s all you could ask for,” said Hirthler, the defending and only two-time event winner. “I really didn’t have anything for the leader. He was running real good. I picked up a lot of spots off that early race restart crash in turn one and my car was pretty strong. With the weight they put on the 604 Crate engines it pulled us down kind of hard and we just didn’t have the steam to try and compete with the leader once we got to second-place.”

With the restart on lap 27, Hirthler rolled into second-place, with Kemmerer third and Davis now fourth. One final caution came after 35-laps, when Logan Wagner spun around exiting turn 4.

It was Henn winning by a safe distance followed by Hirthler, Davis, Brett Gilmore and Kemmerer as the checkered waved to make up the top five finishers.

“I kept getting started on the top and it just wasn’t the place to be,” offered Davis afterward. “I really had to fight to get back to the bottom. We were running a 602 Crate tonight and we weren’t really even sure if we’d come tonight. I talked with Craig Whitmoyer and he said we’d have a good shot because they had the weights balanced pretty good between the different engines running tonight. We made a decision about nine o’clock this morning to come and we’re happy with the way everything turned out in the end.”

There were 45 358 Modified cars also on hand for several practice sessions to prepare for Saturday nights Freedom 76 event paying $30,000 to the winner with action getting the green at 7 p.m.

Adult tickets for the 51ST Annual Freedom 76 are priced at $40. Youngsters, 6 through 11, will pay $10 while kids under 6 are admitted free. Pit admission will be $45 with no license required. There are no advance tickets being offered. Rain date for the Freedom 76 is Saturday, September 25.

Saturday will see pit gates open at 9 a.m. with ticket sales starting at 3 p.m. Fans will be able to enter the speedway at the first turn and fourth turn spectator gates to reserve seats with blankets between 9am and 12noon.

Chapel service has been moved outside of main gate area starting at 2:45 p.m. BRING YOUR BLANKET OR CHAIR.

The green flag will fall at 7 p.m. as top Modified racing talents participate in qualifying events, the $1,000 to win GT Radiator Repairs Cash Dash, the Schaeffer Racing Minuteman 20 and top it all off with the 51st edition of the Freedom 76, “The Granddaddy of Modified Stock Car Classics”.

THE LYNN HIMES GREAT EFFORT AWARD $100 will go to the highest finishing driver NOT in the top ten in Grandview points.

Popular Pete Knappenberger and his Maddie Pearl group will be entertaining from 4 p.m. to 6 p.m. in the first turn area.

Gary Balough, winner of hundreds of Modified and Late Model features, will have his famous Batmobile on display. He will also be autographing copies of his book, “A Checkered Past: My Story, Gary Balough”.

For additional information check in at www.grandviewspeedway.com, Facebook, or 610.754.7688.

For those unable to get to the track the race can be seen on Dirt Track Digest.