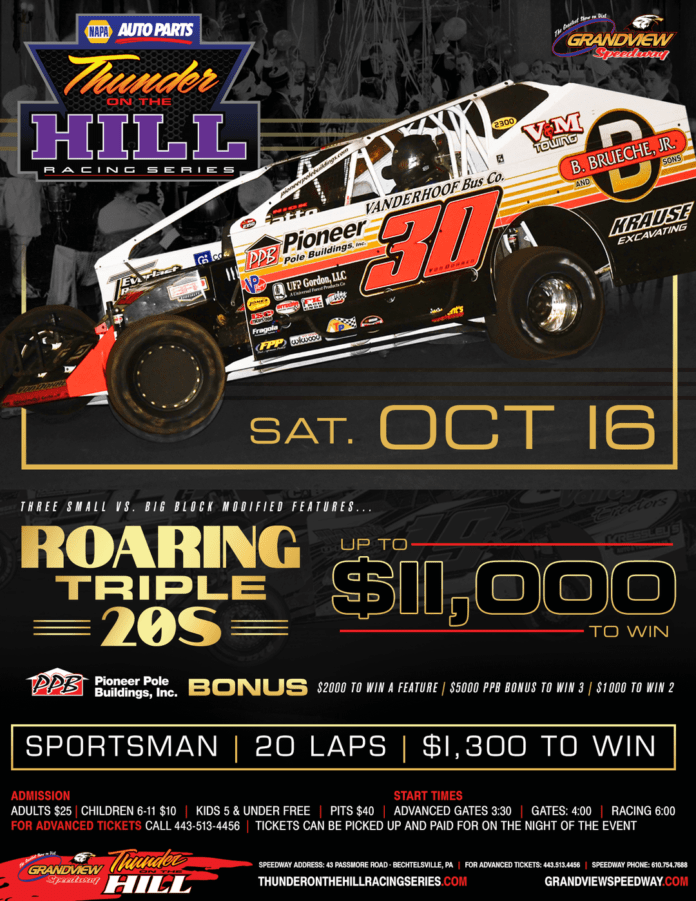 BECHTELSVILLE, PA – The season finale of the NAPA Auto Parts Thunder on the Hill Racing Series invades the Grandview Speedway on Saturday night, October 16 with the Pioneer Pole Buildings Triple Roaring 20’s for Big Block/358 Modifieds plus a full program of Sportsman all getting underway at 6 PM. Gates open at 4 PM. A series of qualifying events will determine the twenty-four car starting field for the Big Block/358 Modified feature events. Each feature will pay $2,000 to win.

If one driver should win all three features, they would earn $6,000 plus a $5,000 bonus from PPB making the payoff worth $11,000. There is also a $1,000 PPB Bonus for any driver that wins two feature events. That $5,000 PPB bonus for a three win sweep is possible as a 4-6-8 inversion will be used for the second and third features. A minimum of $600 will be paid just to start the three twenty lap feature events.

This season finale event started in October 2000 with the popular 4-25’s, a features only format showcasing four different divisions. The following October 2001, the event was expanded to the 5-25’s. This format continued until 2015 when the Halloween Party event transitioned to a Modified, Sportsman and Limited Sprint triple header. The Big Block/358 Modifieds were the headline division competing in a 40 lap feature that paid $5,000 to win. This format continued until 2019. In 2020, it was time for the introduction of the Triple Roaring 20’s. Sharing the victories were Kevin Hirthler, Ryan Beltz and Duane Howard.

The Triple Roaring 20’s event will allow both Big Block and 358 Modifieds to compete together in a unique rules package. This special rules package is offered to the regions modified drivers, with both American Racer and Hoosier tires allowed for competition, and either Big-Block or Spec Small-Block engines permitted. An event sheet with the complete payoff, rules, and details is available at www.thunderonthehillracingseries.com

There is no entry fee but drivers must pre-enter to be eligible for the posted payoff and to draw. Drivers that are not pre-entered will start at the rear of their heat race. Teams shall pre-enter by calling 443 513 4456.

The format for the Modifieds will follow a draw for the heats. The top twelve from the heats will redraw for the first feature, the balance of the qualified cars will start straight up from the heats and consolation. A 4-6-8 invert draw will determine the starting line-up for the second and third feature. Feature restarts will be double file up to lap eighteen.

History of the October Thunder on the Hill Season Finale Events: