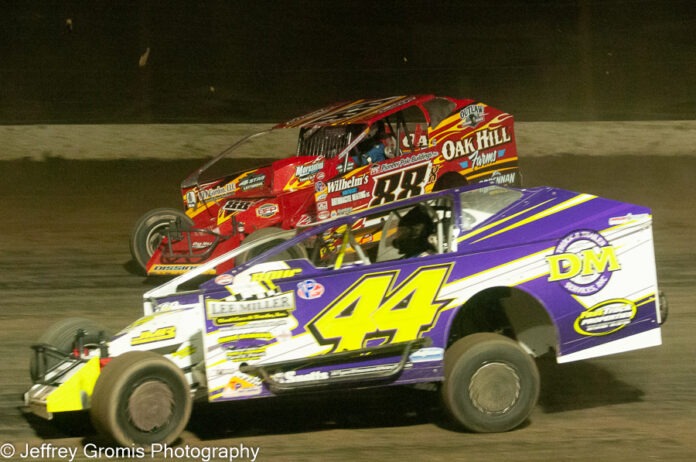 BECHTELSVILLE, PA – Grandview Speedway will return to action this Saturday night with a triple-header program of racing under the NASCAR Advance Auto Parts Weekly Series banner.

The T.P. Trailer NASCAR Modifieds and T.P. Truck Equipment NASCAR Sportsman will be joined by the Wingless Super Sportsman in a three-division program on Saturday, May 7 starting at 7:30 pm. The program will include qualifying events leading to the 30-lap T.P. Trailer Modified feature, the 25-lap T.P. Truck Equipment Sportsman main, and the 25 lap Super Sportsman feature. Pit gates will open at 4 pm. with grandstand gates opening at 5:30 pm. and warm-ups starting at 6:30 pm. Adult grandstand admission is $20, while children under age 12 are admitted free of charge.

This race program will be the first of six on the season that will be produced by ATVN-TV. The races will be broadcast on a tape-delayed basis on the following Tuesday night, with further replays to follow. ATVN airs on channel 4/1004 HD (Lehigh Valley) and channel 8/608 (Delaware County). The air dates and times can be found at astound.com/ATVN.

In T.P. Trailer Modified action, Craig Von Dohren and Brett Kressley have each captured a win in the two-point races run to date. Kressley is one of seven different drivers who have recorded a top ten finish in both races.

In T.P. Truck Equipment Sportsman action, Brian Hirthler and Parker Guldin have been to Victory Lane during the first two-point races of the season. All together there have been four drivers who have top ten finishes in both races.

Hirthler has a win and a third, Kyle Smith has a fifth and a second, Jimmy Leiby has a second and a fifth, and Dylan Hoch has a seventh and a fourth.

These drivers along with a host of others will all be in action this Saturday night, trying to become the next driver to attach their name to the winners list. In the final tally, 2021 saw eleven different drivers reach the winner’s circle in both classes.

Track officials have given another update on the tire shortage situation that we are currently under. Grandview Speedway and BFP Specialty did not receive a new tire shipment this week as expected, however, Lias Tire has said that our shipment will be coming next week. With the small number of tires we currently have left, there will be no tire sales this week, during the week or at the track on Saturday, May 7. This will allow all teams the same opportunity to purchase tires next Saturday, May 14.

The same procedure will be followed on May 14 as was followed last week. Tire sales will be at the racetrack only.  Any team making a tire purchase needs to be signed in for the night’s competition, two tires per team, and the driver must be the one making the purchase.

Officials are reminding race teams that run 602 engines in the Sportsman division that a new local rebuilding center will be available in the coming months under the supervision of the RUSH racing series, hopefully by June. The rebuild center will be KB Performance 6807 Mosserville Road, New Tripoli, Pa. 18066, phone number is 610.751.9650. KB was selected by RUSH as our first local rebuild and repair center, however, he must first go through the RUSH certification and training process.

Saturday night May 14 will be another triple-header, as the USAC East Coast Sprint series will join the T.P. Trailer Modifieds and T.P. Truck Equipment Sportsman starting at 7:30 pm.

The following Saturday, May 21 will see a return to a two-division program with the T.P. Trailer Modifieds and T.P. Truck Equipment Sportsman both in action at 7:30 pm.