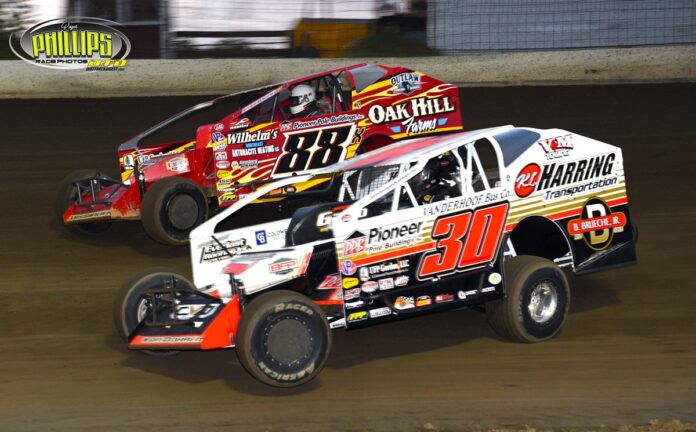 “There wasn’t a lot of strategy involved,” Von Dohren claimed in post-race ceremonies. “You just get in quick and keep moving.”

‘Keep Moving’ was the motto of the night with action all over the race track in an event that saw a top ten payout and the top-4 inverted at each segment.

Oley, PA’s Duane Howard set a rapid pace at the start of the event, with Douglasville’s Tim Buckwalter in the second position. The opening stages of the event went smoothly until the caution flag flew on lap-15 for a slowing Mike Lisowski.

Lisowski was running in the 5th-position before retiring the car with a billow of smoke.

On the restart, Howard and Buckwalter battled for the top position, while four cars — Craig Von Dohren, Kevin Hirthler, Brett Kressley and Jeff Strunk — battled for third spot. Strunk won the four-car war, having moved up from the 22nd starting position.

Howard claimed the checkered flag and a $1,500 payday for winning the first segment. Buckwalter was in second, Strunk in third, and Hirthler in fourth.

The top-4 finishers inverted for the start of segment two, giving Hirthler the prime starting position for the lap 31 green flag.

Hirthler scored a $1,500 payday, Strunk finished in second, Von Dohren in third, and Buckwalter in fourth.

The third and final segment of the event saw Buckwalter and Von Dohren on the front row in a 10-lap shootout to the finish – and a $5,000 payday. Von Dohren took the lead quickly, while Buckwalter and Strunk fought it out for the runner-up spot.

Von Dohren easily sailed to victory and the first ever Balls to the Wall 50. Tim Buckwalter finished in second, Jeff Strunk in third, Kevin Hirthler in fourth, and Billy Pauch Jr. in fifth.

Billy Pauch Jr. took momentum from his fifth-place Modified finish and used that to score the win in the USAC All-Pro SpeedSTR feature event.

Pauch Jr. was in a class of his own making quick work of the SpeedSTR 25-lap event. The action slowed one time on the 8th circuit, but that didn’t slow Pauch Jr. who easily picked up the win. Billy Pauch Sr finished in second, Richie Tobias finished in third, Louden Reimert in fourth, and Tim Buckwalter in the fifth position.

The PPB Balls to the Wall Invert race offered drivers a unique opportunity to earn money as can be seen when reviewing the Modified feature finish below that includes money earned during the night Interesting to note that Duane Howard who finished sixteenth in the feature earned $2,325 as Tim Buckwalter who finished second and Kevin Hirthler who finished fourth, both earned $3,000. The format received very positive feedback from drivers, owners and race fans as well.