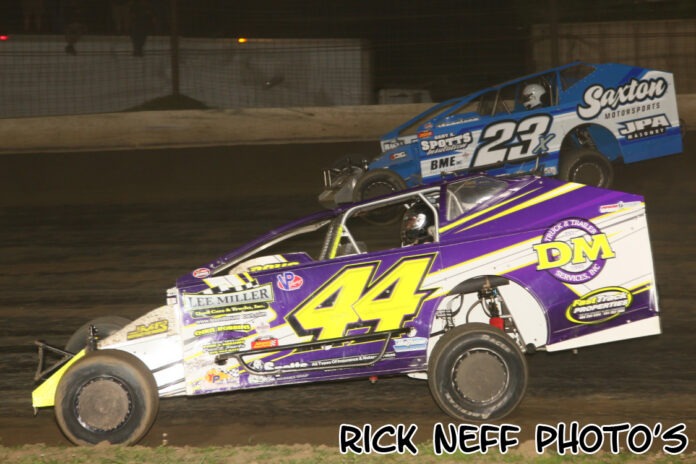 Making the evening even more fulfilling for the veteran driver, was watching his son, Cody Manmiller of Philadelphia, Pa. race home to his first career Grandview Speedway victory in the 25-lap T.P. Truck Equipment NASCAR Sportsman feature, right after his own victory.

Once before in Grandview’s 60-year track history a father and son won features on the same evening, when Randy and Mike Bailey were winners in a Twin 35-lap NASCAR Modified feature program on June 20, 1998.

The evening’s program was part of the NASCAR Advance Auto Parts Weekly Racing Series. The two winners received bonus money from T.P. Trailers and Truck Equipment, sponsors of the Modified ($300) and Sportsman ($200) divisions at the Speedway.

For Doug Manmiller, he was able to grab the lead from Jordan Henn of Kutztown, Pa. with just four laps remaining, after the duo was part of a thrilling five car battle for the lead. Henn had been leading since lap twelve, after taking the lead from a strong running Eric Biehn of Barto, Pa.

Cody Manmiller’s win was just as dramatic, as he chased down race long leader Hunter Iatalese of Germansville, Pa., also looking for his first career win, and took the lead going into turn three on lap 21 and ran the final four laps to secure the victory.

The T.P. Trailer Modified feature began with Biehn taking the lead from the drop of the green. Quickly Bobby Gunther-Walsh of Allentown, Pa. and Henn joined in, making for a three-car battle for the top spot.

The first caution on lap six for a front straight tangle between Ryan Beltz of Barto, Pa. and Mike Lizowski of Minersville, Pa., reset the field.

On the restart, Biehn and Henn pulled away from the rest of the pack and started a battle for the lead. Soon Tim Buckwalter of Douglassville, Pa, joined the race for the lead on lap eight, after advancing from his 13th starting spot.

Henn was finally able to grab the lead from a strong running Biehn on lap twelve, with Buckwalter following to second two laps later.

Soon there were separate battles going on up front, between Henn and Buckwalter for the lead, between Brett Kressley of Orefield, Pa., up from 15th spot, and Manmiller advancing from his 14th starting position for third, and a three-car struggle for fifth between Biehn, Jeff Strunk of Boyertown, Pa. and John Willman of Birdsboro, Pa.

By lap 20 during a long stretch of green flag action, the leaders reached lapped traffic, and things really got tight up front, as the multiple car battles joined together. Henn led, followed by Buckwalter, Kressley, Biehn and Manmiller.

Manmiller began advancing once things tightened up, moving into fifth on lap 15, fourth on lap 18, third one lap later, and second by lap 23, mostly by running the top lane around the speedway. Once to second, he chased down Henn, and the two ran side by side until Manmiller took the lead with an outside pass to score lap 26.

After losing the lead, Henn tried to change lanes and regain the top spot, only to get sideways in turn one. Before he could correct the car, he was clipped by Strunk, and the contact damaged the front end of his car, causing him to stop in turn one for only the second caution of the event.

Manmiller fired quickly on the restart and was never challenged, leading the remaining four laps to score the win. Following Manmiller to the checkered after the thrilling feature were Buckwalter, Kressley, Strunk and Biehn, who scored his first top five of the season after running up front all night.

The remainder of the top ten were Willman, Craig Von Dohren of Oley, Pa., Nate Brinker of Macungie, Pa., Duane Howard of Oley, Pa. and Craig Whitmoyer of Hamburg, Pa.

Qualifying heat races for the 38-car field were won by Kressley, Biehn, Willman and Von Dohren. Consolations were won by Kevin Graver Jr. of Lehighton, Pa. and Jared Umbenhauer of Richland, Pa.

The T.P. Truck Equipment Sportsman feature looked as if Hunter Iatalese would be registering his first ever win. Iatalese took the lead at the drop of the green and raced away to a huge lead over the rest of the field that were battling for position, until a caution on lap ten for a spinning Lex Shive of Pennsburg, Pa., reset the field.

The field behind Iatalese at the lap ten caution were Mark Gaugler of Boyertown, Pa., Tyler James of Birdsboro, Pa., Nate Horn of Slatedale, Pa., and Mike Myers of Alburtis, Pa.

At this point Manmiller was sitting in ninth position, but quickly went to work on the restart, advancing to fifth one lap later, third by lap twelve, and into second on lap 14.

Once reaching second, Manmiller was a great distance behind Iatalese, but the leaders were reaching lapped traffic at this point, and the race was on. By lap 18 Manmiller caught Iatalese, and the two waged a great battle for the top spot, with Iatalese on the bottom and Manmiller up top.

While this was going on up front, Dylan Hoch of Mertztown, Pa. and Jimmy Leiby of West Milford, NJ were slicing their way to the front after starting 13th and 17th respectively.

On lap 21, Manmiller was able to finally make the pass for the lead on the outside lane going down the backstretch into turn three. After securing the lead he was able to pull away the remaining laps to score his first career Grandview win, followed by Iatalese and James who scored their career best finishes in second and third. Following in fourth and fifth were Hoch and Leiby.

Qualifying heats races for the 33 cars in the pits were won by Iatalese, Gaugler and Myers, with the consolation going to Stangle.

The T.P. Trailer NASCAR Modifieds and T.P. Truck Equipment NASCAR Sportsman will be running another double-header program next Saturday, June 11 starting at 7:30 pm. The program will include qualifying events leading to the 30-lap T.P. Trailer Modified feature and the 25-lap T.P. Truck Equipment Sportsman main event. Pit gates will open at 4 pm. with grandstand gates opening at 5:30 pm. and warm-ups starting at 6:30 pm. Adult grandstand admission is $18, while children under age 12 are admitted free of charge.

East Penn Manufacturing – DEKA Batteries will be on hand for an employee recruiting night and will be sponsoring the T.P. Trailer Modified qualifying heat race events.