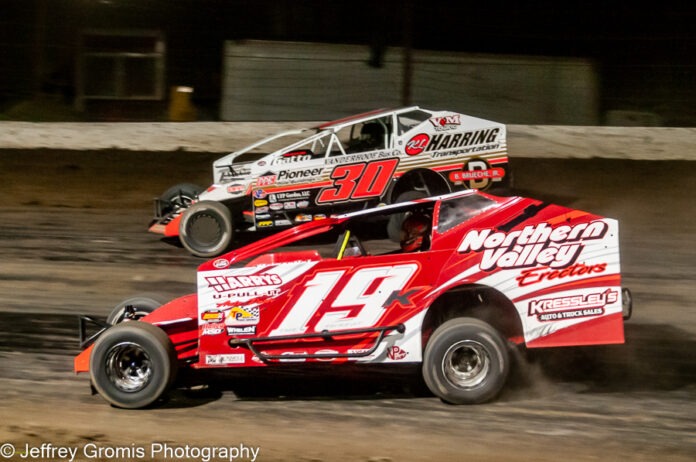 BECHTELSVILLE, PA – Brett Kressley of Orefield, Pa. was able to take the lead from a strong running Mark Kratz of Pennsburg, Pa. with a sweeping outside move following a lap 17 restart, then outlast several late race cautions, to score his second 30-lap T.P. Trailer NASCAR Modified win of the season Saturday Night at Grandview Speedway.

Dylan Hoch of Mertztown, Pa. made an outside pass of early race leader Mark Gaugler of Boyertown, Pa. on lap 14, then outdueled Cole Stangle of Neshanic Station, N.J. and Kyle Smith of Fleetwood, Pa. to emerge with the win in the 25-lap T.P. Truck Equipment NASCAR Sportsman feature event.

The T.P.Trailer Modified feature began with Mark Kratz taking the lead at the drop of the green and set a quick pace over Jordan Henn of Kutztown, Pa. Soon a five-car battle for third position developed between Ryan Beltz of Barto, Pa., Dylan Swinehart of Fleetwood, Pa., Brad Grim of Coplay, Pa., Carol Hine III of Reading, Pa., and Eric Biehn of Barto, Pa.

On lap seven, Swinehart stopped for a caution with mechanical problems, and regrouped the field. At this point Kressley had advanced from his 15th starting spot into ninth, and following the restart made big gains, moving into the top five by lap nine.

It was at this point a four-car race began for the top spots, with Kratz leading, followed by Henn, Brad Grim and Kressley, all swapping spots in an attempt to catch the strong running Kratz.

Cory Merkel of Bally, Pa. stopped with mechanical troubles on lap 16, setting up a series of cautions that changed the running order drastically over the next several laps, and ending the great three-car duel for second.

It was following a restart on lap 17, that Kressley made the outside winning pass around Kratz and into a lead he would never surrender. Cautions on lap 21 for Hine III who was running in the top ten, and Kratz who had his great run end on lap 23, kept the field close to Kressley.

Several drivers would work their way into contention in the second half of the race, including Craig Von Dohren of Oley, Pa. up from 18th starting spot, Tim Buckwalter of Douglassville, Pa up from 17th, Doug Manmiller of Shoemakersville, Pa. last week’s winner up from 16th, and a late charging Jared Umbenhauer of Richland, Pa. who started 21st.

Kressley continued leading, and late in the race Biehn was strong and moved into second, until Von Dohren was able to move by on lap 24. Ryan Grim of Laurey’s Station, Pa. was also moving up in the late stages and arrived in fifth by lap 21.

In the final six laps Von Dohren pressured Kressley for the lead, including a last-ditch effort diving low in turn three on the final lap, but Kressley had the power to race home with his 19th career victory.

Qualifying heat races for the 36 cars on hand were sponsored by East Penn Manufacturing – DEKA Batteries providing the winners with a $50 bonus, and were won by Kratz, Henn, Hine III and Beltz. Consolations were won by Umbenhauer and Bobby Gunther-Walsh of Allentown, Pa.

The T.P. Truck Equipment Sportsman main event saw Mark Gaugler grab the lead on the green and set the pace for the first half of the feature.

Hoch, who started 15th in the race, quickly arrived in the top five by lap five. While Gaugler led, Zane Roth of Lehighton, Pa. and Matt Clay of Lebanon, Pa. dueled for second, while Hoch was joined by Cole Stangle, up from 14th, in a battle for fourth.

Hoch arrived in second on lap twelve, and battled with Gaugler for two circuits, before making a thrilling outside move in turn four on lap 14 to secure the top spot.

After taking the lead, Hoch had a multi-lap duel with Stangle and Kyle Smith, who moved into the top five on lap 13. After several green flag laps, Hoch began to pull away, leaving Stangle and Smith to battle for second, a battle that was very close and entertaining over the final five laps.

Qualifying heats for the 34 cars on hand were won by Gaugler, Mike Myers of Alburtis, Pa., and Roth, with Hirthler winning the consolation.

The next event on the Grandview schedule will be Tuesday, June 14 starting at 7:30 pm. The program will be the second NAPA Auto Parts Thunder on the Hill Racing Series event featuring the USAC National Sprint Series non-wing Sprint cars along with the 358 Modifieds participating in round three of the PA 358 Modified Tri-Track Series. Adult grandstand admission will be $30, children ages 6-11 will be $10, and kids ages 5 and under are free. Pit admission is $40, and a license is not required.

The T.P. Trailer NASCAR Modifieds and T.P. Truck Equipment NASCAR Sportsman will be running another double-header program next Saturday, June 18 starting at 7:30 pm. The program will include qualifying events leading to the 30-lap T.P. Trailer Modified feature and the 25-lap T.P. Truck Equipment Sportsman main event. Pit gates will open at 4 pm. with grandstand gates opening at 5:30 pm. and warm-ups starting at 6:30 pm. Adult grandstand admission is $18, while children under age 12 are admitted free of charge.