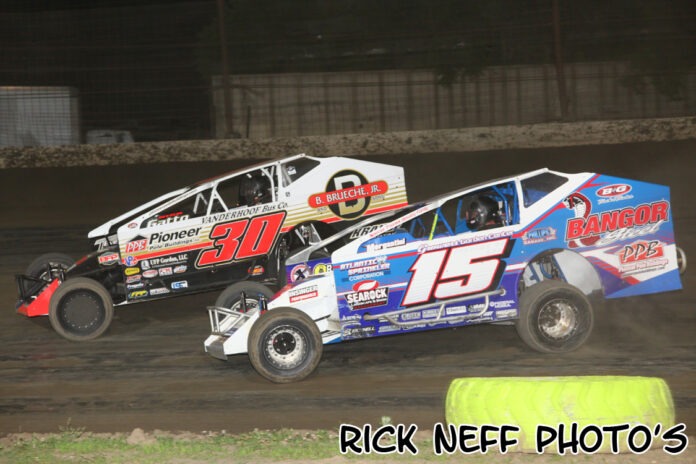 Billy Pauch Jr. of Frenchtown, New Jersey took the twenty-four car 358 Modified field down to the green flag grabbing the lead on the start while  Von Dohren moved into the second-position.

Pauch led the early stages of the event with Von Dohren and Jared Umbenhauer – aboard the Breitenstein No. 14 car – hot on his tail.

While the battle up front stayed solid all eyes were on Brett Kressley.  Kressley charged forward from the 11th starting position moving into fifth on lap five, and claiming fourth-position and third-position in the consecutive laps.

The action slowed on lap 19 when Jimmy Leiby spun in front of the frontrunners for the only caution of the event.

Von Dohren race side-by-side with Pauch on the restart into turn 1 overtaking the lead by the time lap 20 clicked off.  Von Dohren ran unchallenged for the remainder of the event as  Pauch Jr. had  his hands full attempting to hold off Kressley rim-riding the high side of speedway.   It was Kressley sending roster tails and he navigated Grandview’s high banked turns.

Von Dohren remained calm and steady as he went on to claim the $3,000 victory and his second consecutive NAPA Auto Parts Thunder on the Hill checkered flag.  Kressley would catch Pauch Jr and take home the second spot, Pauch settling for third, Duane Howard was fourth, and Eddie Strada delivered a flawless run grabbing a top-five finish.

Brett Kressley set quick time with a lap of 14.183 for the 358 Modifieds in the timed warm-ups.  Modified heat races were won by Tim Buckwalter, Eddie Strada, and Alex Yankowski  as Ron Kline won the consolation– each qualifier winner picked up $200 courtesy of GT Radiator Repair  of Ambler PA.   Kressley also  earned $200 for setting fast time from GT Radiators.

The NAPA Auto Parts Thunder on the Hill Racing Series races back into Grandview Speedway on Tuesday, June 28 when Levan Machine and Truck Equipment presents Pennsylvania 410 Sprint Car Speedweek and the Greg Hodnett Cup.  The only winged 410 Sprint Car appearance of 2022 will be co-headlined by the NASCAR 358 Modifieds.