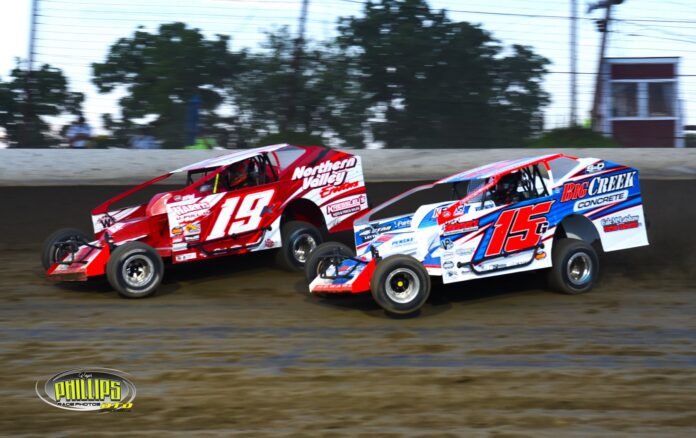 The pre-race Meet and Greet with Pastor Don Kerns on Saturday night will include Modified drivers Duane Howard and John Willman along with Sportsman drivers Mike Myers and Logan Bauman. The Meet and Greet is held in the main gate area starting at 5 pm. and is a great time for fans to meet the drivers up close and collect some autographs.

Speedway management would like to advise all race teams that tire sales will resume this week at the racetrack ONLY. The tire truck will be at the track when the pit gate opens at 4 pm, and all teams will be allowed to purchase two tires. To be certain the tire sales are monitored fairly, we are requiring that all cars must be signed in first for the night’s event, before purchasing, and the driver of each car is required to make the tire purchase.

In another memo from Lias Tire, the factory will be shutting down for a week at the end of June for a required inspection, so race teams are being advised, so they can plan accordingly for the coming weeks.

Once again Grandview Speedway management would like to thank everyone for their patience, cooperation and support throughout this entire tire situation.

For Kressley, it was his second victory of the season and the 19th of his career, continuing his climb up the all-time win list in Grandview Speedway history. In addition to two wins already this season, plus five last year, Kressley has marched past some very well-known and long-time storied names in Grandview racing history, whose names are contained on the win list.

The following drivers have been passed by Kressley just since the start of the 2021 season. Randy Bailey, Jerry Rice, Kerry Kratz, Mike Erb, Kevin Hirthler, Don Loder, Chip Slocum, Jon Kellner, Eddie Mumford, and Smokey Warren. Some of these drivers raced for several decades at Grandview, and Brett Kressley has passed them in total wins, in this his seventh season of Modified competition.

Kressley will be looking to add to his totals again Saturday night along with other top point challengers such as Doug Manmiller, Craig Von Dohren who won Tuesday night’s Thunder on the Hill 358 Modified race, Tim Buckwalter, Duane Howard, Jeff Strunk, Jesse Leiby, Craig Whitmoyer, Mike Lisowski, Jared Umbenhauer, and a host of others on Saturday night.

In the T.P. Truck Equipment Sportsman division, Dylan Hoch scored his first win of the season and his fifth career in the division. The win followed a remarkable string of four straight fourth place finishes which has placed him on top of the points parade.

With the win, Hoch became the sixth different driver to reach victory lane in T.P. Truck Equipment Sportsman competition this season. Other drivers with wins already this season include Jordan Henn, Parker Guldin, Lex Shive, Cody Manmiller and Brian Hirthler, who is the only driver with two victories.

These drivers will be in action along with many more including top point drivers like Kyle Smith, Jimmy Leiby, Cole Stangle, Dakota Kohler, Mike Schneck Jr., and Logan Bauman.

The T.P. Trailer NASCAR Modifieds and T.P. Truck Equipment NASCAR Sportsman will return again next Saturday, June 25 and will be joined by the Outlaw Racing Series Vintage racers starting at 7:30 pm.

The race program will be sponsored by United Auto Workers Local 677. They will be having a company outing at the track during the day, and drivers Kevin Graver Jr. and Dylan Hoch will have their race cars on hand for the festivities.In addition, a very special guest will be on hand, as former Grandview Speedway Track Champion Dave Kelly will be traveling in to join in for the full day of activity.