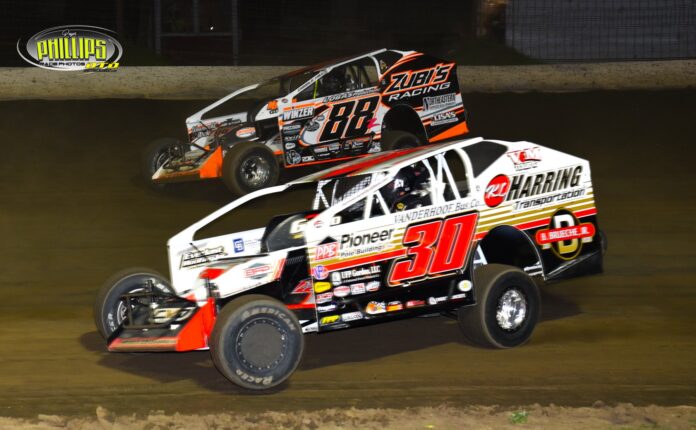 BECHTELSVILLE, PA – Craig Von Dohren of Oley, Pa. arrived in second position with just six laps remaining in Saturday night’s 30-lap T.P. Trailer NASCAR Modified feature event, however lapped traffic allowed him to catch and pass Jeff Strunk of Boyertown, Pa. with just a lap and a half remaining, to give Von Dohren his fourth point race win of the season at Grandview Speedway.

Both winners received bonus money from T.P. Trailers and Truck Equipment (Modified $300, Sportsman $200) in the race program that was part of the NASCAR Advance Auto Parts Weekly Racing Series.

In the early going of the T.P. Trailer Modified feature, Bobby Trapper Jr. of Scranton, Pa. led the way for the first sixteen laps, being challenged by Strunk eventually for four laps between laps 12 and 16, when Strunk was finally able to grab the lead entering turn one on lap 16.

While this was going on, Duane Howard of Oley, Pa., Tim Buckwalter of Douglasville, Pa., Doug Manmiller of Shoemakersville, Pa. and Von Dohren were working their way forward with some entertaining battles for position.

With only one caution slowing the race on lap seven, leader Strunk would reach lap traffic by lap 22, setting up the wild and dramatic finish.

Strunk had heavy traffic to fight through, while Von Dohren began picking off spots, quickly moving by both Trapper and Howard to arrive in second on lap 24. In the final six laps Von Dohren would erase a comfortable advantage Strunk had built up, as they both were passing lapped cars while running down the closing laps.

Von Dohren would catch Strunk and make the winning pass as the two took the white flag at the line, and then had to survive the lapped traffic, a last turn attempt by Strunk who pulled alongside of VonDohren in turns three and four, and won the race off the final corner to score the win.

Heat race wins for the 37 cars on hand were captured by Brad Brightbill of Sinking Spring, Pa., Mark Kratz of Pennsburg, Pa., Darrin Schuler of Stroudsburg, Pa. and Brett Gilmore of Kutztown, Pa. Consolations were won by Dylan Swinehart of Fleetwood, Pa. and Kyle Lilick of Collegeville, Pa.

The T.P. Truck Equipment Sportsman feature saw Kenny Bock grab the lead at the start and never look back, racing home to his second career Grandview win. It was no easy task however, as many early race cautions slowed the action and several restart challenges came from Decker Swinehart of Fleetwood, Pa.

During the race Brian Hirthler was continuing to pick up spots by running the high side in the early stages, and then low grove in the late going. It appeared as if Bock was home free until Hirthler was able to slip by Swinehart for second, scoring lap 23, and then quickly reel in Bock making for a close finish.

In the end Bock withstood the last lap challenge to score the win followed by Hirthler and Swinehart. Tyler James of Birdsboro, Pa., Adrianna Delliponti of Norristown, Pa. completed the top five and scored their best finishes of the season.

Heat race winners in the 30 car Sportsman field were Bock, Delliponti and Swinehart, with Leiby winning the consolation.

The T.P. Trailer NASCAR Modifieds and T.P. Truck Equipment NASCAR Sportsman will be joined by the Outlaw Racing Series Vintage Racers in a three-division program this coming Saturday, June 25 starting at 7:30 pm. The program will include qualifying events leading to the 30-lap T.P. Trailer Modified feature, the 25-lap T.P. Truck Equipment Sportsman main, and the Vintage Racers will be running in a feature event only.

Pit gates will open at 4 pm. with grandstand gates opening at 5:30 pm. and warm-ups starting at 6:15 pm. Adult grandstand admission is $18, while children under age 12 are admitted free of charge.

The night’s racing program will be sponsored by the United Auto Workers Local 677. They will be having a company outing during the day, and drivers Kevin Graver Jr. and Dylan Hoch will have their racers on display for the day’s festivities.

There will also be a very special guest on hand for the night’s racing program, as former Grandview Speedway Track Champion, and United Racing Club Champion, Dave Kelly will be traveling north to be on hand to meet everyone and participate in the UAW 677 night of action.

The following Tuesday, June 28 will see the next NAPA Auto Parts Thunder on the Hill Racing Series event, as the Pennsylvania 410 Sprint Car Speedweek Series Hodnett Cup $10,000 to win Sprint Car event will be run along with the 358 Modifieds starting at 7:30 pm.