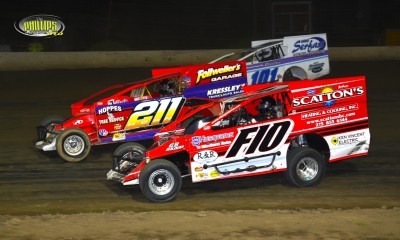 The T.P. Trailer NASCAR Modifieds and T.P. Truck Equipment NASCAR Sportsman will be in action on Saturday, June 25 starting at 7:30 pm. The program will include qualifying events for both divisions leading to the 30-lap T.P. Trailer Modified feature and the 25-lap T.P. Truck Equipment Sportsman main. In addition, the Outlaw Racing Series Vintage racers will be in action in a feature only program.

The night’s racing program will be sponsored by the United Auto Workers Local 677. They will be having a company outing during the day, and drivers Kevin Graver Jr. and Dylan Hoch will have their racers on display for the day’s festivities.

There will also be a very special guest on hand for the night’s racing program, as former Grandview Speedway Track Champion, and United Racing Club Champion, Dave Kelly will be traveling north to be on hand to meet everyone and participate in the UAW 677 night of action.

Looking at his accomplishments during his racing career at Grandview, Kelly picked up a track championship, scored 6 wins in the 358 Modified division, and scored more wins than any other driver in URC Sprint car competition, with 20 victories.

The pre-race Meet and Greet with Pastor Don Kerns on Saturday night will include Modified driver Kevin Graver Jr., Sportsman driver Dylan Hoch, and Vintage drivers Nicho Flammer and Bill Gerhart. The Meet and Greet is held in the main gate area starting at 5 pm. and is a great time for fans to meet the drivers up close and collect some autographs.

Race teams are being advised that there will be NO tire sales at the racetrack this Saturday night, and as has been the case all season there will be no fuel truck on site. Management again thanks everyone for their support and patience throughout the season dealing with the tire situation.

Competition has been intense so far this season in both the T. P. Trailer Modifieds and T. P. Truck Equipment Sportsman, with both divisions taking a different course so far, as we near the midpoint of the year.

In the T.P. Trailer Modifieds, Craig Von Dohren has been on quite a hot streak so far, winning four of the seven-point race events, plus two Thunder on the Hill 358 Modified races, and the season opening VP Race Fuels Bruce Rogers Memorial Big Block/Small Block Modified event. Only two other drivers have reached victory lane so far, as point leader Brett Kressley has scored two wins, while Doug Manmiller reached victory lane once.

Several drivers have been close to a win, but Von Dohren has been able to pull off some late race heroics to score several of those wins. Jeff Strunk, Brett Gilmore, Jordan Henn and Mark Kratz have run strong lately, leading features late, and are still looking to reach victory lane.

These drivers will be in action this Saturday along with other top point drivers such as Tim Buckwalter, Duane Howard, Jared Umbenhauer, Mike Lisowski, Craig Whitmoyer, Cory Merkel and nearly three dozen drivers trying for the feature victory.

While Modified victory lane has been dominated by a few drivers, the T.P. Truck Equipment Sportsman have been just the opposite, with seven different winners in the eight events that have been run thus far.

These drivers will be challenging for a win this Saturday night along with top point drivers such as Kyle Smith, Jimmy Leiby, Cole Stangle, Mike Scneck Jr., Dakota Kohler, Tyler James and Logan Bauman.

Grandview Speedway will be busy next week as the next NAPA Auto Parts Thunder on the Hill Racing Series event takes place on Tuesday, June 28. The event features the Pennsylvania 410 Sprint Car Speedweek Series running the $10,000 to win Hodnett Cup race plus the 358 Modifieds in a 30-lap $3000 to win event starting at 7:30 pm.

This will be the only 410 Sprint Car race of the season at Grandview and will be featuring the top drivers of the Pennsylvania Posse along with a few invaders. The last two seasons, NASCAR Cup Series Champion Kyle Larson has been the winner of the Speedweek event at Grandview.

Also just around the corner on the Grandview schedule, is the 52nd annual Firecracker 40 championship race for the T.P. Truck Equipment Sportsman on Saturday, July 2. The T.P. Trailer Modifieds will also join the program starting at 7:30 pm.

Information is always available at www.grandviewspeedway.com or on Facebook, or by telephone at 610.754.7688