BECHTELSVILLE, PA – It was a beautiful night of racing presented by Levan Machine and Truck Equipment with a full house of spectators to watch the NAPA Auto Parts Thunder on the Hill Racing Series doubleheader.  Rico Abreu of St Helena, California claimed his first 410 Sprint Car win on ‘the Hill’ as part of Pennsylvania Speedweek presented by Red Robin and Brett Kressley won the 358 Modified portion of the event.

Abreu claimed $10,000 and the Hodnett Cup trophy for his efforts in a race that proved tricky for the leaders barely dodging multiple incidents and avoiding fighting through heavy-lapped traffic.

“We had some breaks with cautions,” Abreu said in post-race ceremonies.  “But you have to do everything right to get those breaks in the first place.”

Abreu may have started on the pole but it wasn’t easy for the California native with Christopher Bell moving from inside row 2 into the second position on the start.  Abreu fired off fast, approaching a full-straight lead by the fourth circuit with lapped traffic quickly approaching.

With Abreu in a comfortable lead, the battle for second heated up, between Brent Marks and Bell – but a Lap 7 yellow slowed the field when Dylan Norris spun directly in front of the leaders.

On the restart, Rico shot to the high side of the one-third-mile speedway with Marks moving passed Bell and Anthony Macri powering around the outside of Kyle Larson.

Marks pressured Abreu as the laps ticked away, approaching lapped traffic until the red flag flew on lap 14 for Kyle Larson, whose No. 57 machine tipped on its side with a broken rear end.

Abreu continued on the restart, racing around the inside of the speedway while Marks rode around the high side hot on his heels.

The final caution flew on lap 23 for Zach Hampton, who spun in front of the leaders.

Just over ten laps remained on the scoreboard, Abreu took the green flag creating some distance between himself and the battle for second between Anthony Macri and Brent Marks.

Heavy lapped traffic challenged the leaders in the late stages, as the top five positions were nose-to-tail when the white flag flew, but Abreu held them off to claim his third Pennsylvania Speedweek win.

Brett Kressley picked up his third NAPA Auto Parts Thunder on the Hill Racing Series win on Tuesday night passing Jared Umbenhauer in the second half of the 30-lap feature.

Mike Lisowski led the twenty-four car field to the drop of the green flag with Umbenhauer taking the lead on the second circuit of the event.  Umbenhauer dominated the early stages of the race, before Kressley – who started in the fifth position – closed quickly and overtook the top spot with the help of side-by-side lapped traffic.

The only caution of the event flew on lap 26 when Ron Kline stopped at the top of the speedway with a right rear flat tire.

Kressley rolled on to the $3,000 win with Duane Howard moving into the second position on the restart, Umbenhauer settling for third, Alex Yankowski in fourth, and Billy Pauch jr. in the fifth position.

GT Radiator Repair $200 Fast Time for the 358 Modifieds was won by Jared Umbenhauer with a lap of 14.272.  Modified Qualifying Heat Races were won by Rick Laubach, Ron Kline, and Craig Whitmoyer who all claimed a $200 bonus from GT Radiator Repair.

The NAPA Auto Parts Thunder on the Hill Racing Series returns on Tuesday, August 2 with the Big-Block Modifieds and Small-Block Modifieds competing in the ‘Roaring’ Triple 20s event.  The 602 Sportsman round out an exciting program of racing action. 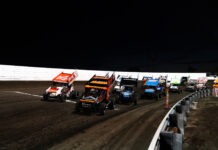