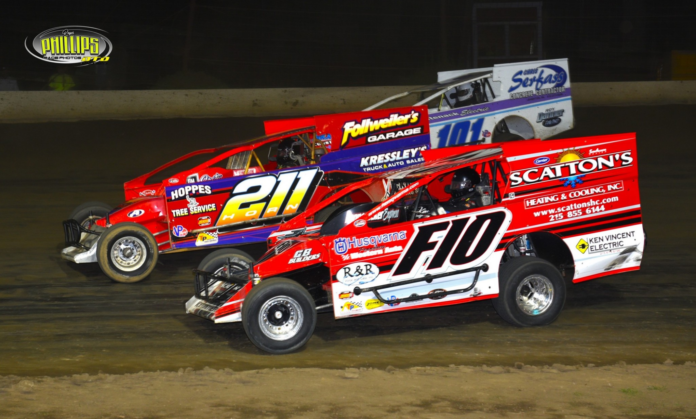 Following a weather postponement last Saturday, July 2, this Saturday, July 9 will see the same program that was scheduled for last weekend, as the T.P. Truck Equipment NASCAR Sportsman will be competing in the 52nd annual Firecracker 40 championship race starting at 7:30 pm. The program will also include the T.P. Trailer NASCAR Modifieds plus qualifying events leading to the 40-lap T.P. Truck Equipment Sportsman championship paying $2000 to win and the 30-lap T.P. Trailer Modified feature.

Pit gates will open at 4 pm. with grandstand gates opening at 5:30 pm. and warm-ups starting at 6:30 pm. Adult grandstand admission is $22, while children ages 6-11 are $10, and children ages 5 and under are admitted free of charge.

The T.P. Truck Equipment Sportsman competitors will be running in the 52nd annual Firecracker 40, however, it was run for the Late Model division from the inception of the race in 1971 until the Late Model class was discontinued after the 2018 season.

During the last three seasons the race has been run for the T.P. Truck Equipment Sportsman division, the winning drivers have been Brad Brightbill in 2019, Brad Arnold in 2020, and Brian Hirthler took the win last year in 2021.

Point leader Dylan Hoch will be a top contender to score a win in the Championship event on Saturday, as he is one of the eight different feature winners so far this season. Other drivers who have reached victory lane have been Jordan Henn, Parker Guldin, Lex Shive, Cody Manmiller, Kenny Bock, Decker Swinehart, and the only two-time winner Brian HIrthler.

The T.P. Trailer Modifieds saw Brett Kressley pick up his third feature win of the season in the last Saturday night event to be held and followed that win with a Tuesday night triumph in the Thunder on the Hill program in conjunction with the PA 410 Sprint Speedweek program. Kressley will continue as the T.P. Trailer Modified point leader entering this Saturday’s program.

The other winners this season have been Craig Von Dohren, who has four Saturday night point race wins, two Thunder on the Hill wins, plus a win in the season opening VP Fuels Bruce Rogers Memorial Big Block/Small Block Modified event, and Doug Manmiller, who so far has been the only driver to break the Von Dohren/Kressley hold on Victory Lane.

On Saturday, the Low Down and Dirty meet and greet will feature Modified drivers Bobby Gunther-Walsh and Dan Waisempacher along with Sportsman drivers Kenny Bock and Mike Schneck Jr. starting at 5 pm.

The following Saturday, July 16 will see a three-division show featuring the T.P. Trailer Modifieds, T.P. Truck Equipment Sportsman, plus the only appearance of the United Racing Club 360 Sprint Cars starting at 7:30 pm.

The night of racing will be known as Do It in the Dirt Night featuring Bob Hilbert Sportswear as the race night sponsor.

It all started with a one-color tee shirt called “Do It in the Dirt” at Grandview Speedway 50 years ago. That was the start of what we now know as Bob Hilbert Sportswear.

There will be fan giveaways that night along with a 50th anniversary edition of the Do It in the Dirt tee shirt that will be on sale that evening.