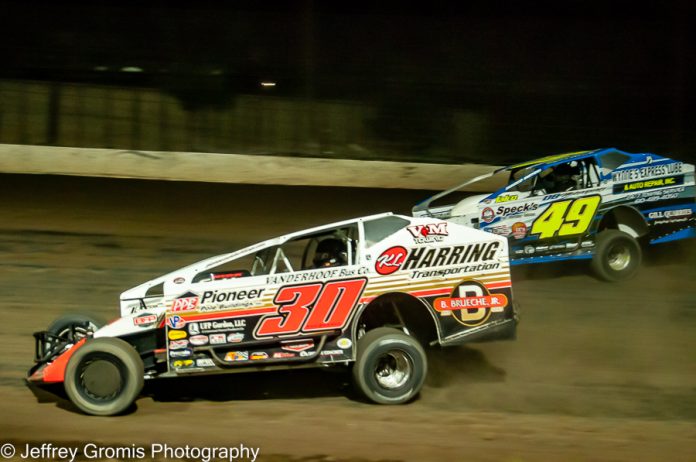 The night’s program was sponsored by T.P. Trailers and Truck Equipment, who every week provide both winners (Modified $300, Sportsman $200) with bonus money, in the race program that was part of the NASCAR Advance Auto Parts Weekly Racing Series.

The Outlaw Racing Series Vintage Racers were on hand to participate in the Dave Smith Memorial, with wins going to Andy Cassel (Modified class) and Gage Phillips (Sportsman class)..

The win for Von Dohren was his fifth point race win of the current season and the 119th of his Grandview career in NASCAR Modified competition.

The T.P. Trailer Modified feature looked as though it may run non-stop, as the first caution did not appear until lap 26, with plenty of side-by-side action spread throughout the field during the long stretch of green flag racing.

Bobby Trapper Jr. of Scranton, Pa. took the lead at the initial green and set the early pace, leaving Kyle Lilick, Ray Swinehart of Boyertown, Pa., John Willman of Birdsboro, Pa., and Ryan Grim of Laurys Station, Pa. to battle behind him.

Lilick was able to catch leader Trapper and grab the lead entering turn one on lap 13 to take control of the top spot.

Meanwhile Von Dohren was slowly working his way forward from his 13th starting position, and eventually became part of a great battle for the top five positions between Ray Swinehart, Willman, and Ryan Grim by lap fourteen.

As the laps clicked off, Von Dohren would advance past each member of the top five, reaching the second position with a pass of Trapper Jr. on lap 24, but at this point Lilick had a comfortable advantage over the rest of the field, racing in lapped traffic.

When it appeared Lilick, in his rookie season of Modified racing, may be headed to that first ever win, the caution waved on lap 26 for Brad Arnold of Bethel, Pa., who stopped with a broken race car in turn four.

On the restart, Von Dohren was able to slide by Lilick entering turn one to take over the lead, however the drama was not over yet.

After running to lap 26 without a caution, the race encountered two more yellow flags on laps 28 and 29, to give Lilick a chance to retake the lead, but Von Dohren proved too strong, and maintained the lead to the finish.

Qualifying heat race winners for the 38 cars on hand were Dylan Swinehart of Fleetwood, Pa., Von Dohren, Brett Gilmore of Kutztown, Pa. and Lilick. Consolations were won by Strunk and Kevin Graver Jr. of Lehighton, Pa.

Joey Vaccaro of Reading, Pa. took over the top spot on a lap seven restart, making a three wide move to get the top spot.

Dylan Hoch of Mertztown, Pa. was quickly working his way forward from his fourteenth starting position, catching Vaccaro and making a move for the lead, as the two swapped the lead, but Vaccaro was able to maintain the lead until a caution slowed the action on lap twelve.

Hoch was able to take the lead on the restart, while Brian Hirthler, who had been advancing through the field from his 16th starting position, followed him toward the front and moved into second.

The battle was on for several laps between the two, racing side by side before Hirthler grabbed the lead on lap sixteen.

Brian Hirthler began to pull away leaving Hoch to battle with Jesse Hirthler of Green Lane, Pa. for the second position in the closing laps of the feature.

Adrianna Delliponte of Norristown, Pa. and Mike Schneck Jr. of Lebanon, Pa. were able to advance into the top five in the late stages of the feature to score their best finishes of the season.

Qualifying heat races for the 37 car field were won by Vaccaro, Kyle Smith of Fleetwood, Pa., Brian Hirthler and Kenny Bock of Oley, Pa., with consolations being won by Graver and Guldin.

The Outlaw Racing Series Vintage Cars ran in the 5th annual Dave Smith Memorial feature, honoring one of their former members, with Andy Cassel scoring the win over his father Wes Cassel, Scott Schaeffer, Mike Houghtaling and Richie Baker Jr. Gage Phillips was the first Sportsman car across the line in sixth position, taking their divisional win in the combined 15-lap feature event.

Cassel had a fairly easy time of it in the win, as when he reached lapped traffic mid-race, a caution came out clearing the track ahead of him to make a clear path to victory. The caution however was good for Phillips, as he gained several spots following the restart to score his victory.

The T.P. Trailer NASCAR Modifieds and T.P. Truck Equipment NASCAR Sportsman will be joined by the United Racing Club Sprint Cars in a three-division program next Saturday, July 30 starting at 7:30 pm. The program will include qualifying events for all three classes leading to the 30-lap T.P. Trailer Modified feature, the 25-lap T.P. Truck Equipment Sportsman main, and the 25-lap URC Sprint car feature race.

It will be Christmas in July on Saturday, July 30, as V&M Towing along with SDS Photography will be providing bonus money for both the Modified and Sportsman racers in the features plus the addition of cash dashes for both divisions. Santa Claus will also make an appearance for the youngsters that evening as well.

The T.P. Trailer Modified feature winner will pocket a cool $3500 total payoff with purse and bonuses for the 30-lap main event, while the T.P. Truck Equipment Sportsman winner will collect a total prize of $1000 for the 25-lap main event.

On Tuesday, August 2, the final NAPA Auto Parts Thunder on the Hill Racing Series event of this season will be presented, featuring Big Block/Small Block Modifieds in the Triple Roaring 20’s, along with a complete show of 602 Sportsman starting at 7:30 pm.