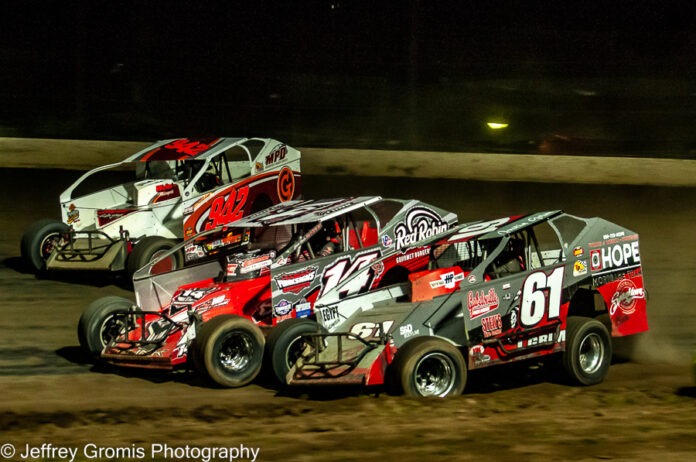 Pit gates will open at 4 pm. with grandstand gates opening at 5:30 pm. and warm-ups will be starting at 6:30 pm. Adult grandstand admission is $18, while children ages 11 and under are admitted free of charge.

The night of racing will be known as Do It in the Dirt Night featuring Bob Hilbert Sportswear as the race night sponsor celebrating the very first tee shirt that Bob Hilbert made and sold at the speedway, he first sold tee shirts at, Grandview Speedway.

It all started with a one-color tee shirt called “Do It in the Dirt” at Grandview Speedway 50 years ago. That was the start of what we now know as Bob Hilbert Sportswear. Growing up as a race fan, Bob started to letter his friend’s race cars and then decided to print tee shirts. It was well before there was an industry of tee shirt printers.

They are rolling back the prices and selling this limited-edition tee for JUST $5.00 EACH!

For more info about Bob Hilbert Sportswear and how they can go to work for you, visit them on line at www.bobhilbert.com or you can shop the online store at www.bobhilbertshop.com for the latest products they have in stock!

Prior to the racing action on Saturday will be the weekly Meet and Greet. This week’s drivers include Modified driver Mark Kratz and Sportsman driver Hunter Iatalese. The Meet and Greet is held in the main gate area starting at 5 pm. and is a great time for fans to meet the drivers up close and collect some autographs.

It will be a busy week at Grandview Speedway, as on Tuesday, August 2 it will be the final NAPA Auto Parts Thunder on the Hill Racing Series event of the season with the special Triple Roaring 20’s program for Big Block/Small Block Modifieds starting at 7:30 pm.

The program will include qualifying races leading to 3/20-lap feature races all paying $2000 to win and $200 to start. There will be a bonus of $5000 if a driver can win all three, or a $1000 bonus for winning two features all provided by Pioneer Pole Buildings. Also, if a driver captures his first Thunder Series win, an additional bonus of $3000 will be added to make for a $5000 win for a 20-lap feature. GT Radiator Repair has also posted $1000 in bonus money for qualifying heat race action as well.

This race program will also include the 602 Crate Sportsman, making their first Thunder series start, running in qualifying races leading up to a 25-lap $1000 to win feature race.

After last Saturday night’s racing program, Craig Von Dohren remains on top of the T.P. Trailer NASCAR Modified points chase following his fifth-place outing. Brett Kressley finished the feature in second spot to remain in second place in the standings, followed by Doug Manmiller in third (seventh place in feature), Jeff Strunk is fourth after his first feature win of the season and Duane Howard (sixth place in feature) sits fifth in points.

In T.P. Truck Equipment Sportsman action, Brian Hirthler added to his point lead last Saturday with his fourth feature win of the season. Dylan Hoch and Kyle Smith both rallied back from an early race multi-car mishap to finish 12th and 10th respectively, to maintain second and third in points. Jimmy Leiby sits fourth in points after a non-top ten finish after a mid-race pit stop, and Parker Guldin moved into fifth in points after a climb through the field Saturday to a fifth place finish. 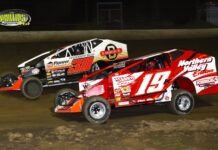