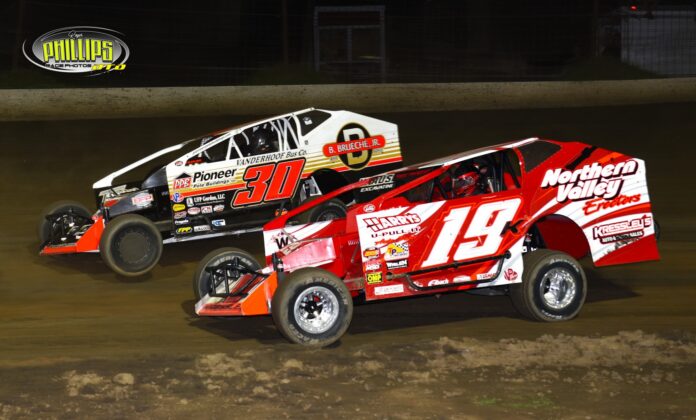 The race, which paid Kressley $10,000 to win, honored the man who built Grandview Speedway and the track also celebrated its 60th birthday with the Forrest Rogers Memorial on Saturday night.

Steve Young of Collegeville, Pa. scored his first win of the 2022 season leading every lap of the non-stop 25-lap T.P. Truck Equipment Sportsman feature event. The win for Young was his third career at the track, and made him the tenth different driver to score a win in the division this season.

The feature race winners each received bonus money from T.P. Trailers and Truck Equipment, who every week provide both winners (Modified $300, Sportsman $200) with the bonus money, in the race program that was part of the NASCAR Advance Auto Parts Weekly Racing Series.

The opening ten laps of the feature were a rough and tumble affair, as the race was red-flagged twice, once on lap five for a five car mix up in turn one, followed by a wild flip by Craig Whitmoyer of Hamburg, Pa. on lap ten. Also involved in the wreck was Darrin Schuler of Stroudsburg, Pa. who could not avoid the flipping Whitmoyer car, making contact. Schuler was shaken and sent to the hospital for further evaluation.

In between the unfortunate mishaps, was some great racing action, including Ron Haring Jr. tracking down and passing Lilick for the lead, using the outside lane to take the lead off turn four on lap seven, just before another crash on the home straight away involving several mid-pack cars, which really scrambled the running order.

While all of this wild action was happening, Kressley was quickly advancing through the field from his fourteenth starting spot, and lined up fourth for the lap seven restart.

Following the lap ten red flag, the drivers settled into a long stretch of green flag action, including a battle for second between Lilick and Kressley, with Kressley moving into second on lap thirteen. At this point Haring Jr. had already built a big lead, and Kressley took off, looking to track down the leader.

A battle for position was going on for top ten spots between Bobby Gunther-Walsh of Allentown, Pa., Doug Manmiller of Shoemakersville, Pa. up from his 20th starting spot, John Willman of Birdsboro, Pa., and Jeff Strunk of Boyertown, Pa. who was moving forward  after starting  in 19th spot.

Kressley was able to catch leader Haring Jr., and made the pass for the lead off turn four to take command on lap twenty, while point leader Craig Von Dohren of Oley, Pa. who started 15th, and Brad Grim of Coplay, Pa. worked their way into the top five.

Von Dohren moved into third on lap 23 with a pass of Lilick, and would next move into second on lap 30 after catching and passing Haring Jr., leaving behind a battle for top five spots between Lilick, Brad Grim, Manmiller, and Strunk.

The race continued green with Kressley building up a straightaway lead over Von Dohren, as the two worked through lapped traffic. Brad Grim advanced as high as third after passing Haring Jr. on lap 33, until Strunk took third spot on lap 38.

A final caution waved on lap 39 for Mark Kratz of Pennsburg, Pa. who slowed with a flat tire, wiping out Kressley’s big lead and resetting the field for a final run to the finish.

The top five for the restart consisted of Kressley, Von Dohren, Strunk, Brad Grim and Haring Jr., with the restart really shuffling spots. Strunk was able to sneak past Von Dohren and grab second, but was not able to catch leader Kressley in the closing laps.

A late charge by Manmiller and Duane Howard of Oley, Pa. netted them top five positions in the final laps, but they could not reel in the front running trio.

T.P. Trailer Modified qualifying heat races for the 38 cars on hand, were sponsored by Dorney Park and Wildwater Kingdom, on hand to promote their fall HAUNT event, with the $50 wins going to Kressley, Haring Jr., Willman, and Carroll Hine III of Reading, Pa. Consolations were won by Ray Swinehart of Boyertown, Pa., and Brett Gilmore of Kutztown, Pa.

The T.P. Truck Equipment Sportsman 25-lap feature was a big change from the Modified feature, as the race ran straight through and was over in 6:48.64. Steve Young, who has had a lot of car troubles during the season, started on the pole and took off with the drop of the green.

Action was hot for second on back between Mike Myers of Alburtis, Pa., Nate Horn of Slatedale, Pa., Hunter Iatalese of Germansvile, Pa., Zane Roth of Slatington, Pa., Matt Clay of Sinking Spring, Pa. and Joey Vaccaro of Reading, Pa.

Without any breaks in the action, the field began spreading out as the laps clicked off, and some of the high point drivers starting deep in the pack were starting to move forward.

Dylan Hoch of Mertztown, Pa., who started 14th, was on the charge in the second half of the feature, arriving in fifth on lap 18, and eventually reached second on lap 23, but would not be able to catch Young in the final two laps.

Point leader Brian Hirthler of Green Lane, Pa., who started 17th, also took off in the final ten laps of the feature, and reached the top five with a pass of Roth with just three laps to go.

Young proved to be strong throughout the entire race, working through some lapped traffic in the second half, but never let the field catch him, and raced home to his first win since August 10, 2019.

At the checkered flag, it was Young in for the win followed by Hoch, Myers for his best outing of the season, Brian Hirhler, Iatalese also scoring his best run of this season, Ryan Graver of Lehighton, Pa., Roth, Clay, Lex Shive of Pennsburg, Pa., and Horn.

Qualifying heat race winners for the 32 cars on hand were Roth, Young and Myers, with Jimmy Leiby of West Milford, NJ scoring the consolation win.

Up next on the track schedule is a rescheduled Outlaw Racing Series Enduro and Vintage Car double- program on Friday, August 19 starting at 7 pm. Grandstand admission is $10 for this event.

The next day, Saturday, August 20, the program will be featuring the T.P. Trailer NASCAR Modifieds and the T.P. Truck Equipment NASCAR Sportsman in another NASCAR Advance Auto Parts Weekly Racing Series double-header starting at 7:30 pm.

Pit gates will open at 4 pm. with grandstand gates opening at 5:30 pm. warm-ups will be starting at 6:30 pm. Adult grandstand admission is $18, while children ages 5 and under are admitted free of charge.