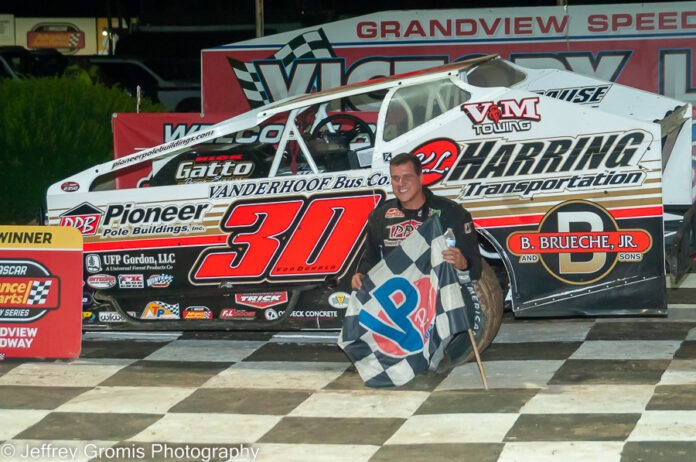 BECHTELSVILLE, PA – The victories continue to add up for Craig Von Dohren of Oley, Pa., as he secured the lead on lap thirteen from Kevin Hirthler of Boyertown, Pa., and raced home with his seventh point race win of the season in the 30-lap T.P. Trailer NASCAR Modified feature race Saturday night at Grandview Speedway.

Mark Kemmerer of Green Lane, Pa. took the lead from Wayne Rotenberger of Ringing Hill, Pa. on lap two, then led the remainder of the non-stop 25-lap T.P. Truck Equipment NASCAR Sportsman feature race, scoring his first win of the season and the fourth of his Grandview Speedway career. It was Kemmerer’s first win since July 28, 2018, and he now becomes the eleventh different driver to win in the division this season.

The feature race winners each received bonus money from T.P. Trailers and Truck Equipment, who every week provide both winners (Modified $300, Sportsman $200) with the bonus money, in the race program that was part of the NASCAR Advance Auto Parts Weekly Racing Series.

The T.P. Trailer Modified feature saw Mark Kratz of Pennsburg Pa. take the early lead, and was quickly challenged by Steve Swinehart of Boyertown, Pa. for the top spot. The action was slowed on lap five, as last week’s Forrest Rogers Memorial winner Brett Kressley of Orefield, Pa. slowed with a flat tire to draw a caution and reset the field.

Swinehart was able to grab the lead on the restart, but it only lasted a lap, as Kevin Hirthler swept around the outside of Swinehart in turn one on the following lap, taking over the top spot.

Von Dohren was already up to ninth for the lap five restart, after starting in fourteenth position, and was continuing to quickly climb toward the front. By lap seven Von Dohren had reached the fifth spot, and a great battle began for the top five spots between himself, Steve Swinehart, Dylan Swinehart of Fleetwood, Pa, and Jeff Strunk of Boyertown, Pa.

After they all changed spots a few times, Von Dohren made an exciting and daring move through turns one and two, going around Strunk and under Steve Swinehart almost at the same time to arrive in second position by lap eleven just before a lap twelve caution.

The caution was for a three car tangle on the front stretch involving Brad Arnold of Bethel, Pa., Cory Merkel of Bally, Pa., and Nate Brinker of Macungie, Pa. who ended up being locked together, causing a delay until the track crew was able to pull them apart.

This caution period ended up wiping out the comfortable lead that Kevin HIrthler had built up, putting Von Dohren alongside for the restart. Following the restart, the two drivers ran side by side for a lap, until Von Dohren took the lead off turn four scoring lap thirteen.

From this point on Von Dohren controlled the race, building up a comfortable lead, which would disappear in the final seven laps when he reached lapped traffic following an extended period of green flag racing. Hirthler and Strunk would close to within striking distance, but could not find a way by, as Von Dohren would work through the traffic and motor on to score his seventh point race win of the season and 121st of his NASCAR Modified career at Grandview. (Counting Thunder on the Hill Series wins and Big Block Modified victories, his career total at Grandview is 133 wins).

In the later stages of the feature, Tim Buckwalter of Douglassville, Pa, Doug Manmiller of Shoemakersville, Pa., Kyle Lilick of Collegeville, Pa., John Willman of Birdsboro, Pa. and Ryan Grim of Laurys Station, Pa., all moved up to battle each other and Steve Swinehart contending for top ten spots, putting on a crowd pleasing duel for positions.

For the second consecutive week, the T.P. Truck Equipment Sportsman ran the 25-lap feature race straight through without a caution flag, covering the distance in 6:54.68.

For Mark Kemmerer it was a total turnaround from the previous week, when he was the first car to drop out of the feature race, this week racing home to the win, ending a four year win drought.

Wayne Rotenberger took the early lead on lap one, only to see Kemmerer motor by coming out of turn four to score lap two.

The field quickly settled into race mode, and battles developed all through the field. Kenny Bock of Oley, Pa. moved by Rotenberger into second on lap four and began the chase of Kemmerer. Behind the lead trio, a multi-car race for positions was on between Nate Mohr of Reading, Pa., Zane Roth of Slatington, Pa., Jesse Hirthler of Boyertown, Pa., Dakota Kohler of Kutztown, Pa., and Brian Hirthler of Green Lane, Pa.

By the half-way signal the leaders were Kemmerer, Bock, Rotenberger, Mohr and Jesse Hirthler. By lap 17 leader Kemmerer reached lapped traffic, giving hope to the others that they might catch him, but Kemmerer was able to steadily work through the lapped cars without skipping a beat and maintain his lead to the finish.

Qualifying heat race winners for the 34 cars on hand were Logan Bauman of Boyertown, Pa., Kemmerer and Rotenberger, while Jimmy Leiby of West Milford, NJ won the consolation.

The next event on the Grandview Speedway schedule is next Saturday, August 27, featuring the T.P. Trailer NASCAR Modifieds and the T.P. Truck Equipment NASCAR Sportsman in another NASCAR Advance Auto Parts Weekly Racing Series program, that will see the Outlaw Racing Series Vintage Racers joining the show starting at 7:30 pm.

Pit gates will open at 4 pm. with grandstand gates opening at 5:30 pm. warm-ups will be starting at 6:15 pm. Adult grandstand admission is $18, while children ages 11 and under are admitted free of charge.

The T. P. Trailer Modified and T.P. Truck Equipment Sportsman drivers will be using the final point race events of the summer season to prepare for the big Freedom weekend of racing in September. The T.P. Truck Equipment Sportsman will compete in the Freedom 38 on Friday, September 16, and the T.P. Trailer Modifieds will compete in the 52nd annual Freedom 76 Championship on Saturday, September 17. Race info is available on the track website under the Freedom 76 tab at www.grandviewspeedway.com.