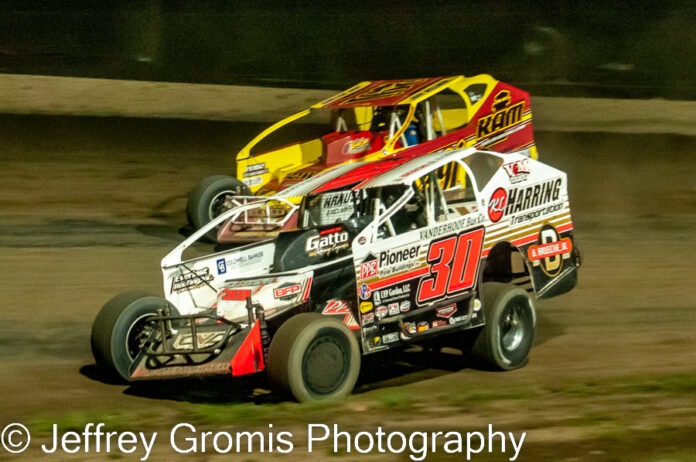 BECHTELSVILLE, NY – It was another classic night of racing at Grandview Speedway on Saturday night, in the NASCAR Advance Auto Parts Weekly Racing Series program, as Craig Von Dohren of Oley, Pa. authored another drive from 18th starting spot to the victory in the 30-lap T.P. Trailer NASCAR Modified feature race.

Von Dohren was able to use a couple of well-timed caution flags to regroup the field, and some key moves following restarts, to drive to his eighth point race win of 2022 and his twelfth overall win of this season. Von Dohren took the lead from Dylan Swinehart of Fleetwood, Pa. on lap 16 moving through turn one, and never surrendered the top spot the remaining laps to score his 122nd career NASCAR Modified Saturday night win at Grandview Speedway.

Kyle Smith of Fleetwood, Pa. has been close on several occasions this season to the top spot but was not able to put everything all together until this week. Smith grabbed the lead from race long leader Michael Burrows of Jonestown, Pa. entering turn one on lap 20 and ran the final five laps to his first win of the season and third career win.

The Wingless Super Sportsman made a visit to Grandview on Saturday night and Brett Perigo was able to take the lead from Steve Wilbur on lap three, then survive a late race challenge from Wilbur in lapped traffic in the closing laps to score the victory.

The T.P. Trailer Modified feature saw Ryan Beltz of Barto, Pa. take the lead at the drop of the green flag, and set the pace for the first eleven laps of the main event. During this time Steve Swinehart of Perkiomenville, Pa., Dylan Swinehart of Fleetwood, Pa., Mark Kratz of Pennsburg, Pa. and Bobby Gunther-Walsh of Allentown, Pa., were dicing amongst each other for top five positions.

A caution on lap eleven reset the field, and by this time Von Dohren had climbed to position eleven. The next couple of laps were key, as there were a couple of mixups, and cautions, as well as some intense racing, which saw Von Dohren move from eleventh to third by the time the caution waved again on lap fifteen for point title contender Brett Kressley of Orefield, Pa. who slowed with a flat tire. Included in this sequence was a turn one move which saw Von Dohren go around Beltz entering turn one, then slide under Brad Arnold of Bethel, Pa. almost at the same time securing two positions in one corner.

Von Dohren would pull out to a huge lead during a long run of green flag racing which would last to the end of the feature. During this time a good tussle would happen between Dylan and Steve Swinehart and Beltz for the number two position, while Arnold, who had been as high as third at one point, Nate Brinker of Macungie, Pa., Kevin Hirthler of Boyertown, Pa., Jared Umbenhauer of Richland, Pa., John Willman of Birdsboro, Pa., and Jeff Strunk of Boyertown, Pa. who was returning from a pitstop were all in a fierce battle for the remaining top ten spots.

Von Dohren would reach lapped traffic with five laps to go, but it never slowed him down, and he was able to race unchallenged the final laps to his eighth point race victory of the season. At the wave of the checkered flag several drivers were able to score their best feature finish of the season. Following Von Dohren across the finish line were Dylan Swinehart, Steve Swinehart, Umbenhauer who grabbed fourth off the final corner, Beltz, Arnold, Brinker, Hirthler, Strunk, and Willman.

Qualifying heats races for the 32 car field were won by Beltz, Gunther-Walsh and Kressley, with the consolation win going to Strunk.

The T.P. Truck Equipment 25-lap Sportsman feature saw Michael Burrows take off at the opening green flag and open up a huge lead with Zach Steffy of Sinking Spring, Pa. holding down second spot. While this was happening, a multi-car duel for position was happening behind them between Keith Haring of Alburtis, Pa., Jesse Landis of Gilbertsville, Pa., Jesse Hirthler of Boyertown, Pa., and Joey Vaccaro of Reading, Pa.

The race ran green for the first 19 laps with Burrows having a huge lead and reaching lapped traffic by lap fifteen. At this point Smith had just reached the fifth spot after starting in thirteenth position. The lap nineteen restart proved to be the key point of the event.

On the restart Burrows led, Steffy pushed high entering turn one, and Smith went low, motoring by several cars to arrive in second spot by the backstretch. The next time around Smith would dive low again in turn one and grab the lead from Burrows off of turn number two.

A final caution on lap 21 for an unfortunate Steffy would set up a final restart, but while the restart would allow several drivers to change positions in the top ten, Smith would pull away to his first win of 2022, becoming the 12th different driver to win a T.P. Truck Equipment Sportsman feature this season.

The final rundown would be Smith in for the win followed by Burrows for his career best finish, point leader Brian Hirthler of Green Lane, Pa. with a late charge, Landis, Jesse Hirthler, Vaccaro, Dakota Kohler of Kutztown, Pa., Dylan Hoch of Mertztown, Pa., Kenny Bock of Oley, Pa., and Mike Schneck Jr. of Lebanon, Pa.

Qualifying heats races for the 32 car field were won by Haring, Burrows and Steffy, with Steve Young of Collegeville, Pa. winning the consolation.

The Wingless Super Sportsman were on hand for their only visit of the season after seeing their earlier visit wiped out by rain in May.

Steve Wilbur took the lead on the opening green, but Brett Perigo was able to sweep to the outside and take the lead off of turn four to score lap three just before the only caution of the 25-lap feature waved for a slowing Brian Nace.

After the restart, the top two would pull away to a huge advantage on the rest of the field, leaving several other drivers to dice for position including Paul Kline, Craig Perigo and Bill Brian Jr. by the half-way point.

By lap 18 the leaders reached lapped traffic and suddenly Perigo’s comfortable lead was gone. Wilber was suddenly putting on the pressure in the closing laps, but Perigo was able to survive the pressure and the lapped traffic to preserve the victory in an exciting finish.

At the checkered it was Brett Perigo in for the win followed by Wilber, Michael Smith with a solid top five all race, Cliff Brian Jr., Bill Brian Jr. up from 13th starting spot, Eric Jennings, Kline, Craig Perigo, Rohan Beasley and Charles Weslowski.

The two qualifying heat races for the 16 car field were won by Tom Savage and Brett Perigo.

Racing next weekend at Grandview Speedway will be on Saturday, September 10, featuring Championship Night. It will be the T.P. Trailer NASCAR Modifieds and the T.P. Truck Equipment NASCAR Sportsman in another NASCAR Advance Auto Parts Weekly Racing Series program that will be the final night of points racing, and the 2022 track champions will be crowned in both divisions.

Pit gates will open at 4 pm. with grandstand gates opening at 5:30 pm. warm-ups will be starting at 6:30 pm. Adult grandstand admission is $18, while children ages 11 and under are admitted free of charge.

On Friday, pit gates open at 3 pm with grandstand gates opening at 5:30 pm. and racing at 7:30 pm. Adult Grandstand admission is $15, with children ages 6-11 paying $5, while children ages 5 and under are admitted for free. Pit admission on Friday is $35, and no license is required. There is no rain date for the Friday event.

On Saturday, September 17, the 52nd annual Freedom 76 will be run for the 358 Modifieds paying $30,060 to the winner, with the number 60 signifying the speedway’s anniversary season. Pit gates open at 9 am for inspections, Grandstand ticket windows open at 3 pm. with racing starting at 7 pm. Fans will be able to enter the Grandstand areas between 9 am. and 12 Noon to reserve seats with blankets.

The T. P. Trailer Modified and T.P. Truck Equipment Sportsman drivers will be using the final point race of the season to prepare for the big Freedom weekend of racing next weekend. Race info and Modified entry forms are available on the track website under the Freedom 76 tab at www.grandviewspeedway.com.