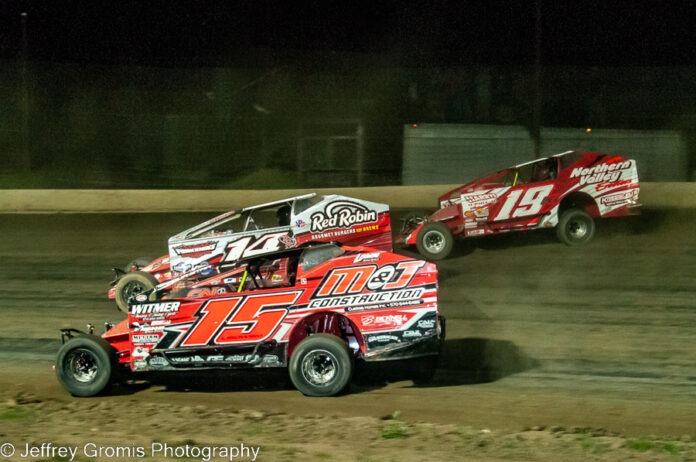 BECHTELSVILLE, PA. – The 60th anniversary season of auto racing action moves into the final night of points competition this Saturday, September 10 at Grandview Speedway, when the 2022 track champions will be decided and crowned.

This Saturday, September 10, will feature the T.P. Trailer NASCAR Modifieds and the T.P. Truck Equipment NASCAR Sportsman in another NASCAR Advance Auto Parts Weekly Racing Series program starting at 7:30 pm. The show will include qualifying events for both classes leading up to the 30-lap T.P. Trailer Modified feature and the 25-lap T.P. Truck Equipment Sportsman main event.

Pit gates will open at 4 pm. with grandstand gates opening at 5:30 pm. warm-ups will be starting at 6:30 pm. Adult grandstand admission is $18, while children ages 11 and under are admitted free of charge

As an added bonus for the drivers on Saturday, Bob and Ann Oliver from Competition Carburetion have posted a $100 voucher for both the T.P. Trailer Modified and T.P. Truck Equipment Sportsman divisions. The bonus will be given to the driver turning the fastest lap at any time during each division’s respective feature event on Saturday.

Prior to the racing action on Saturday will be the weekly Low Down and Dirty Meet and Greet. This week’s drivers include Modified drivers Justin Grim and Lex Shive, along with Sportsman drivers Jimmy Leiby and Molly Struss. The Meet and Greet is held in the main gate area starting at 5 pm. and is a great time for fans to meet the drivers up close, collect some autographs, take photos, and talk racing one on one.

The 52nd annual Freedom 76 Modified Championship is fast approaching, coming up on Saturday, September 17. Lap sponsorships at $20 per lap are now available by contacting Tina Rogers, Tommy Kramer or Jeff Ahlum at the track on race night, or by going to the speedway website at www.grandviewspeedway.com to leave a message. Lap sponsorships are a great way for fans to wish their favorite driver’s good luck in the big race, or for businesses to do some advertising. All lap sponsorships will be read on the public address system each week leading up to and including race night on September 17, as well as a listing in the track program Grandview Groove, and will be posted on social media.

For many decades the night before the Sixer has become a great tradition at Grandview, with fans gathering at the speedway to camp together and socialize. For the last eight seasons Grandview added the Freedom 38 for the Sportsman competitors, so there was something for everyone to do while they were at the track on Friday night. In an effort to increase participation for the Friday activities, management has rolled back the grandstand admission to just $5, while children ages 11 and under will be free of charge.

On Friday, pit gates open at 3 pm with grandstand gates opening at 5:30 pm. and racing at 7:30 pm. Pit admission on Friday is $35, and no license is required. There is no rain date for the Friday event.

Speedway management has updated the tire rules for Sportsman competitors for the Freedom 38. Tires will now be open to ANY American Racer tire, open compound, with the Grandview tread pattern still required.

1- Double rub rail on the left side only.

2-No oxygenated fuel (MUST PASS OUR TEST)

NO TRACTION CONTROL …. WILL BE CHECKING!!

On Saturday, September 17, the 52nd annual Freedom 76 will be run for the 358 Modifieds paying $30,060 to the winner, with the number 60 signifying the speedway’s anniversary season. Pit gates open at 9 am for inspections, Grandstand ticket windows open at 3 pm. with racing starting at 7 pm. Fans will be able to enter the Grandstand areas between 9 am. and 12 Noon to reserve seats with blankets.

For the Freedom 76, the tire rules for the event are as follows, ANY American Racer tire and compound, but it must be the Grandview Speedway tread pattern. Further 358 Modified rules are available on the speedway website or again, any questions please call Cliff or Ed.

The chase for the 2022 T.P. Trailer Modified title has become a two-man battle heading into the final point race this Saturday. Point leader Craig Von Dohren added to his lead with his eighth point race win of the season this past Saturday night, while the number two man in points Brett Kressley, had a good night turn bad, when he suffered a flat tire mid-race and had to start over again ending up outside the top ten at the finish.

Other drivers inside the top five in points had varying nights of success, as Jeff Strunk sits third in points after rallying from a pitstop to finish ninth, while Doug Manmiller was unable to run the feature after a medical issue prior to the feature but remains fourth in the standings. Duane Howard had a forgettable night and was an early DNF after being in a feature race tangle to remain fifth in points.

In the T.P. Truck Equipment Sportsman division, Kyle Smith was able to break through and score his first victory of the season, becoming the twelfth different driver to do so. The victory will keep Smith third in the current standings behind point leader Brian HIrthler who rallied for a late race third place effort, and second place point man Dylan Hoch who scored an eighth-place finish on Saturday night. Jimmy Leiby and Parker Guldin both fought hard on Saturday night, just missing top ten finishes to remain fourth and fifth in the point standings.