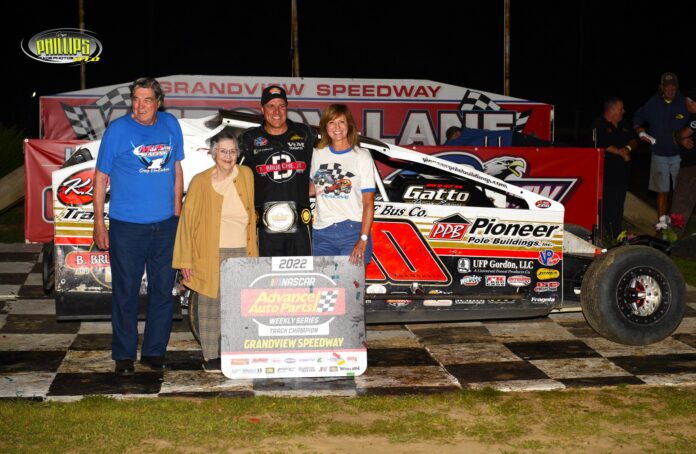 BECHTELSVILLE, PA. – The 60th anniversary season of auto racing action at Grandview Speedway has been building all season long to the biggest race event of the season, and now it is here, the Freedom 76 weekend of racing.

This past Saturday the final point races were conducted for the season, and Craig Von Dohren picked up his 13th career T.P. Trailer Modified championship, while Brian Hirthler scored his 3rd career championship in the T.P. Truck Equipment Sportsman division.

The Freedom 76 weekend begins this Friday, September 16 with the 9th annual Freedom 38 Sportsman Championship race paying $2000 to the winner, along with qualifying events plus practice time for Modified drivers wishing to participate in the Freedom 76.

For many decades the night before the Sixer has become a great tradition at Grandview, with fans gathering at the speedway to camp together and socialize. For the last eight seasons Grandview added the Freedom 38 for the Sportsman competitors, so there was something for everyone to do while they were at the track on Friday night. Management has rolled back the grandstand admission to just $5, while children ages 11 and under will be free of charge.

Speedway management has updated the tire rules for Sportsman competitors for the Freedom 38. Tires will now be open to ANY American Racer tire, open compound, with the Grandview tread pattern still required.

On Friday, representatives from the Boyertown Museum of Historical Vehicles will be on hand to meet with everyone, provide information about their museum, what they do, and what the museum is all about. They will be in the grandstand area when the Meet and Greet starts.

Prior to the racing action on Friday will be the weekly Low Down and Dirty Meet and Greet. This week’s drivers include Sportsman drivers Mike Schneck Jr., Mark Mohr and Talan Carter. The Meet and Greet is held in the main gate area starting at 5 pm. and is a great time for the fans to meet the drivers up close, collect some autographs, take photos, and talk racing one on one.

On Saturday, September 17, the 52nd annual Freedom 76 will be run for the 358 Modifieds paying $30,060 to the winner. The program will include qualifying heats, consolation races, cash dash, along with the Schaeffer Racing Minuteman 20 leading to the 76-lap championship feature. Pit gates open at 9 am for inspections, grandstand ticket windows open at 3 pm. pill draw for position is at 4:30 pm. with the drivers meeting at 5 pm. warm-ups are at 6 pm. with racing starting at 7 pm. Fans will be able to enter the Grandstand areas between 9 am. and 12 Noon to reserve seats with blankets.

For the Freedom 76, the tire rules for the event are as follows, ANY American Racer tire and compound, but it must be the Grandview Speedway tread pattern. Further 358 Modified rules are available on the speedway website or again, any questions please call Cliff Quinn at 484-357-2587 or Ed Scott at 610-298-2408. Entry forms for the Modified competitors are available on the speedway website at www.grandviewspeedway.com  under the Freedom 76 tab.

Six-time Freedom 76 winner Billy Pauch will be on hand on Saturday, September 17. The book about the life and times of Billy and his racing career – The Last Cowboy – will be on sale at the Speedway starting at 3:30 pm. in the turn one area. Pauch himself will be signing the books from 4 – 5:30 pm. The book includes many stories about Pauch’s racing career, including an entire chapter about racing on the Hill at Grandview Speedway, winning the Freedom 76, and winning in Al Hamilton’s Sprint Car at a Thunder on the Hill program.

Action was intense this past Saturday, as the point championship rolled to a conclusion. It was nearly a non-stop T.P. Trailers Modified feature race, and in the end Ron Haring Jr. scored his first ever feature event win. While the battles were on to win the feature among several drivers, Craig Von Dohren and Brett Kressley were trying to decide the point title.

Von Dohren had a healthy lead entering the night, with Kressley having an outside chance to win. Both qualified well, but things changed after that, as Kressley had mechanical trouble after the heat race, causing him to scratch and use a provisional starting spot, starting in last position with a back-up car. The final results saw Von Dohren end the night in eighth position and Kressley in seventeenth, with Von Dohren crowned champion for the third consecutive season, his 13th overall, with his first championship scored in 1988.

The T.P. Truck Equipment Sportsman saw point leader Brian Hirthler put the icing on the season by winning his sixth feature of the year on Championship night to secure his third Grandview point title. Hirthler’s other titles were won in 2017 and 2020.

Hirthler missed a big accident at the start, then was able to out battle Michael Burrows to move to second and challenge Kyle Smith for the win, until Smith had mechanical problems four laps from the end, putting Hirthler on top, allowing him to score his 18th career victory.

The rest of the final top five in points saw Dylan Hoch (sixth), Smith (seventeenth), Jimmy Leiby (seventh), and Mike Schneck Jr. (eleventh) have varying results in the feature on Saturday night, but still ended the year with a top five in the final standings.

Lap money will be available to the drivers leading laps in the Freedom 76 as well as several special bonuses and awards that have been posted, and are as follows:

LYNN HIMES GREAT EFFORT AWARD – $250 Sponsored by T.P. Trailers & Truck Equipment & the Perkins Family (presented to the highest finishing driver NOT in the top 10 in Grandview Points) in memory of Carole Lynn Himes, a long-time familiar face at Grandview Speedway