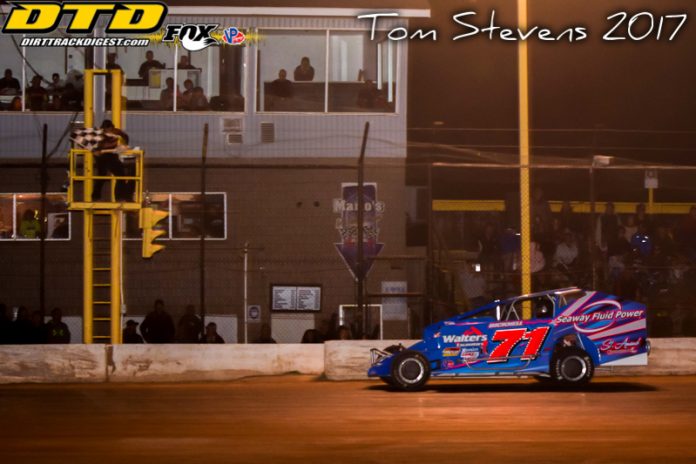 “This was my first sweep at Humberstone in years and to win this race in Pete’s memory is very special to me” stated race winner Mike Bowman in victory lane. “As I said last night, Pete was a long time customer of ours and help me out a lot and it’s special to win here” Bowman added.

Mike Bowman and Tim Jones were on the front row for the Pete Cosco Memorial with Bowman showing the way with Erick Rudolph racing in second. Bowman would pull away from the field as Rudolph was being pressured by Mat Williamson for second. Williamson and Rudolph exchanged second place for several circuits, with Williamson taking second for good on lap nine and would start to go after Bowman. The leaders would hit lap traffic for the first time on lap 17. Williamson would close the gap on Bowman, just before Gary Lindberg slowed on the front stretch to bring out the races first caution on lap 24. On the lap 30 restart, Bowman would take off, with Williamson and Rudolph battling for second. Bowman continued to lead Rudolph, Williamson, Brachmann and Ryan Susice at the halfway mark. Gary Lindberg and Randy Chrysler got together on the front straightaway to bring out the caution on lap 39. On the lap 43 restart, the lead trio would go three-wide with Rudolph taking the lead. Bowman would continue to go after Rudolph for the lead. Bowman and Rudolph would then continue their battle for the lead Rudolph would slip over the edge of turn three with less than 20 laps remaining, giving Bowman the lead for good. Rudolph and Williamson would battle for second until Rudolph pulled away in the late going. Bowman would go on to score the win, his second on the weekend and first Pete Cosco Memorial.

Dylan Davidson and Tyler Puchalski brought the PC Works DIRTcar Sportsman to the green flag for their 25-lap feature with Puchalski showing the way early. Jordan Cosco hit the implement tire in turn three to bring out the races first caution on lap two. On the restart, Puchalski continued to show the way with Adam Leslie racing in second place. Cody McPherson would take second away from Adam Leslie on lap five and would begin to go after Puchalski. Puchalski and McPherson would pull away from third place Adam Leslie, with Luke Carleton and Dylan Davidson raced in the top five. Davidson would drive back through the field and was up to second and challenged McPherson for the lead. McPherson would hold off Davidson to score the win, his third of the season.


Ryan Dinning and Barry Beck Jr were on the front row for the JC Auto Street Stocks 20-lap feature event with Dinning showing the way with Fontaine moving into second. Fontaine would take the lead on lap two as Billy Bleich Jr took over second place, and would challenge Fontaine for the lead. Bailey and Lampman battle d for the lead off a lap six restart. Ken Sargent slowed in turn three to bring out the caution on lap nine. Fontaine would look for the lead, but Bailey would pull away with Billy Bleich Jr racing in second place. Bailey would hold off Bleich to score the win, his fourth in a row, and sixth of the season, earning a “six-pack” for “The Six Pack Machine”.

Tom Neale and Jay Moulton brought the Cosco Haulage Mini Stocks to the green flag for their 17-lap feature event with Moulton showing the way early one as Brandon Iudiciani took second away from Neale. Rob Sauder would get around Iudiciani and Moulton to take the lead on lap eight. After a late race caution, Leroy Buscumb would go after Sauder for the lead and would battle for the top spot. Buscumb would drive on to the victory, his first in the Pete Cosco Memorial.

Craig Vlasic would lead from the drop of the green flag in the 17-lap feature for the Mike Knapp Ford Pro 4 Trucks. Dylan Llord would take the lead over Vlasic off a lap two restart. Tomaski spun in turn four and Terry Ronning had nowhere to go and got collected to bring out the caution. Llord would continue to lead off the restart with Craig Vlasic and Mitch Dumont racing in second and third respectively. Vlasic would look underneath Llord for the lead on lap 11, but Llord would keep the lead. Llord would drive on to score the win, his third of the season.

NEWS AND NOTES:  97 cars signed in pitside. The whole racing program was completed at 10:27 pm.

Labor Day Weekend will see a full card of racing being presented on Season Championship Night for all classes! Gates opening at 4:30 pm in the pits, 5:00 pm in the grandstands and race time on Sunday is at 6:30 pm.

Humberstone Speedway is located just two miles East of Port Colborne on Highway 3, just 17 miles west of the US/Canadian Border at the Peace Bridge (Buffalo/Fort Erie). For more information, please visit us on the World Wide Web at www.humberstonespeedway.com as well as liking us on Facebook by searching NewHumberstoneSpeedway, following us on Twitter @NewHumberstone and Instagram @HumberstoneSpeedway  Don’t forget to bring your portable FM radios and listen to all the action on 90.3FM. You can also call the speedway at (905) 834-4002 or the speedway office at Cosco Haulage (905) 935-2886