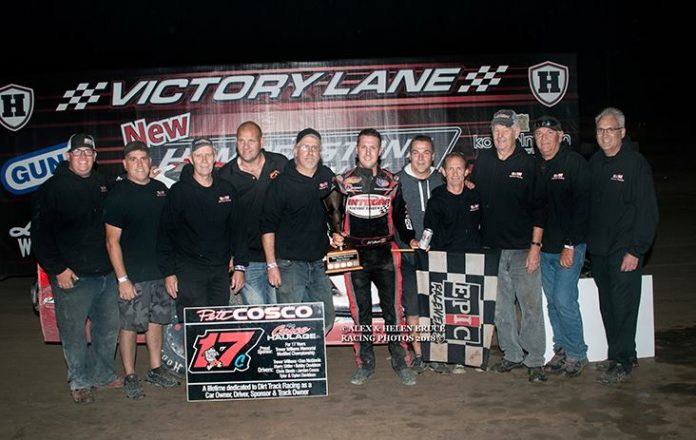 Erick Rudolph and Jeff McGinnis were on the front row for the 75-lap Pete Cosco Memorial feature event with Rudolph showing the way. McGinnis, Shane Pierce, Rick Richner, and Phil Vigneri III raced inside the top five early on. Chris Bellamy spun, in turn, one to bring out the races’ first caution on lap 11. On the restart, Rudolph would continue to show the way. Drivers that were on the move early were Mat Williamson, Ryan Susie, and Gary Lindberg as Lindberg moved into second place on lap 17 and would go after race leader Rudolph.  The red flag would come out for a wreck on lap 33 that involved Chad Brachmann, Steve Lewis Jr, and Fred Carleton. All drivers were alright after the incident. On the restart, Mat Williamson would take the lead away from Rudolph. Williamson and Rudolph would pull away from Jeff McGinnis as Gary Lindberg was challenging McGinnis for the final spot on the podium. Lindberg would complete the pass on lap 68 to move into third place. Williamson and Rudolph battled for the lead for the much of the second half of the race and Rudolph would try to get back around Williamson in the closing laps, but Williamson was able to go on to score the victory. “It is very emotional to get the win tonight”, Williamson said in victory lane. “Racing with Erick (Rudolph), I was lucky to get by him. He passed me to get the win in this race a few times and tonight I was able to pass him and beat him”, Williamson added.

Tyler Puchalski and Robbie Johnston were on the front row and led the Race of Champions Dirt 602 Sportsman Series to the green flag with Puchalski showing the way early as Brad Rouse quickly took over second place. Jordan Cosco would take third away from Robbie Johnston on lap eight and on the following circuit, Brad Rouse would take the lead away from Puchalski. Robbie Johnston came to a stop in turn two to bring out the races first caution on lap 18, erasing Rouse’s lead on the field. Chad Chevalier was on the move during the second half of the race, as he moved around Jordan Cosco to take over fourth place, then went after Puchalski for third. Rouse would pull away to earn his third Humberstone checkered flag of the season and making it the fifth different winner on the Race of Champions Dirt 602 Series in 2018. Not only that Rouse won the race, but Rouse is the 2018 Race of Champions Dirt 602 Series Champion.


Rob Pietz and Colton Ledingham were on the front row for the Pro Fabrication RUSH Late Models feature event with Pietz quickly taking the lead. Chad Homan took second away from Ledingham at the end of the opening circuit to set his sights on race leader Pietz. Pietz and Homan would pull away from third place runner Sam Pennacchio, but a lap nine caution would bunch the field up. The restart would see Homan drive to the outside of Pietz to take the lead away and Homan would go on to lead the final 10 circuits to earn the victory, his sixth of the season.

The JC Auto Thunder Stocks was brought to the green flag for their 20-lap feature event by Dave Bailey and Barry Beck Jr with Bailey showing the way. As Bailey and Beck would open up their advantage over the rest of the field, Pete Reid would move into third place after passing Jim Lampman. Beck, Lampman, and Reid would battle for second as Bailey continued to show the way. Jason Fontaine worked his way into the top three on lap 16 and would battle with Barry Beck Jr for second. Bailey would go on to score the win, his fifth of the season.

Brandon Iudiciani and Evan Curtis shared the front row in the 20-lap feature for the Cosco Haulage Mini Stocks with Curtis leading the field. Curtis would continue to show the way over Jeremy Cooper, Craig Vlasic, Jay Moulton, and Cole Hardy. Vlasic would take second away, just prior to the halfway mark. After a lap 13 restart, Curtis would keep the lead as Jay Moulton took over second place. Moulton and Curtis would battle for the lead in the late stages but Curtis would hold off Moulton to score the win.

Danny Wurster led from his outside pole position in the main event for the Mike Knapp Ford Pro 4 Trucks. Mitch Dumont would take the lead away on lap two as Wurster raced in second and Go Fast Teeple running in third place. Teeple would take the runner-up position away from Wurster on lap five, as Dumont opened up his advantage. Dumont would look like to be on cruise control but would pull off the track with three laps remaining, handing the lead to Teeple. Stephanie Ayers would roll on her side in turn two to bring out the red flag on lap 14. Teeple would hold off Wurster to score his first career win.

NEWS AND NOTES: The crowd on hand was delighted with the driver introductions for the Modifieds prior to the Pete Cosco Memorial. Over $23,000 was paid out to the Modified drivers including over $8,500 in lap sponsorships.

Next Sunday night, the Action Sprint Tour returns for their third visit of 2018 as Rankin Construction will present the racing action.  The Sportsman, Thunder Stocks, Mini Stocks, and Pro 4 Trucks will round out the race card plus Labor Day Fireworks! It will be the final points show of the season for the Sportsman. Showtime is at 6:30 pm. All kids in attendance can check out the activities with the Humbee’s Kids Club happening at 5:00 pm each race night on the second floor of the VIP Tower.

Speed 51 Top of the Board Award: Greg Panunte