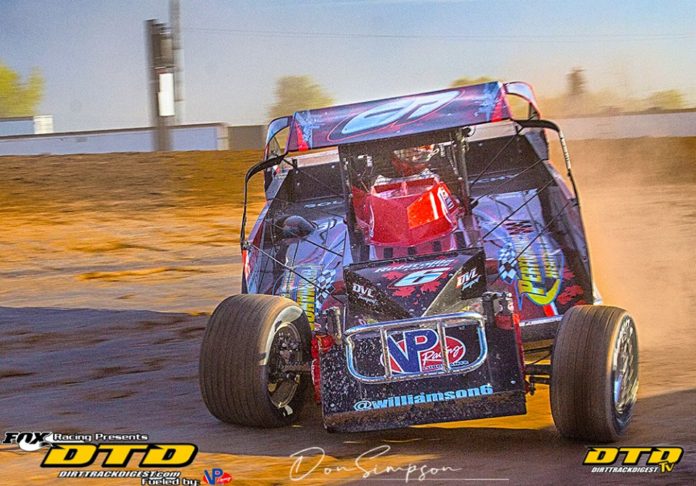 PORT COLBORNE, ON – The New Humberstone Speedway returned to racing on Saturday night with the Lockdown Showdown. The DIRTcar 358 Modifieds headlined the show and the JC Auto Thunderstocks also took centerstage to a worldwide audience on GForceTV.net and will be seen on REV TV Canada. 2019 Super DIRTcar Series Champion Mat Williamson from St. Catharines, Ontario won the $2,300 to win Lockdown Showdown for the DIRTcar 358 Modifieds. Belleville, Ontario’s Justin Ramsay scored the $1,3j00 to win the JC Auto Thunderstock feature event.

The DIRTcar 358 Modifieds saw the best drivers of Eastern Ontario and Quebec make the trip to take on Saturday night to take on the best of Southern Ontario on the tight Humberstone oval for 50-laps. Dalton Slack and Mat Williamson were on the front row for the 358 Modified Lockdown Showdown with Williamson jumping into the lead. Steve Bernier would challenge Slack for second place. Mike Bowman would lose positions early as Austin Wood, Gary Lindberg, and Todd Gordon were able to get by Bowman to go into positions four, five, and six. Williamson would hit lap traffic. Simon Harvey-Perreault spun in turn three to bring out the races’ first caution of the event on lap 13. Off the restart, both Bowman and Lindberg began their marches towards the front. Bernier would be able to move into second with Bowman and Lindberg entering the top five. Williamson would lead Bernier to the line at the end of the first 25-lap segment.

The second 25-lap segment would see Williamson and Bernier battle for the lead as Bowman and Lindberg raced for third place. Bernier would look to the outside of Williamson with 10 laps remaining but went over the edge of the track and lost ground to the leader. Williamson would go on to score the win over Bernier and Mike Bowman. Gary Lindberg would finish in fourth and Todd Gordon would complete the top five.

Jeff Humphrey and Dave Bailey were on the front row for the JC Auto Thunderstocks 25 lap feature with Bailey taking over the lead as Ken Sargent entered the top three after passing Jason Fontaine. The caution would fly for the first time as Rob Murray spun in turn three. Chris Hale, Go Fast Teeple, Zach Bleich, and Adam Plazek all got together. Off the restart, Bailey would take off in the lead as Ken Sargent and Justin Ramsay raced inside the top three. Ian Blanchard’s night would come to an end after his engine expired on the front straightaway. Ken Sargent and Ramsey would take over the top two positions off the restart and Ramsay would battle Sargent for the lead. Ramsey would take off in the lead off an early restart as Humphrey would challenge and pass Sargent to take over second. Chris Hale and Rob Murray both recovered from an early race caution to battle for third place with Logan Schwedyk and Ken Sargent. Chris Hale would challenge Schwedyk for second place as Ramsay would go on to score the win. Schwedyk and Hale would complete the top three.

Racing took place without fans in the stands and all drivers and crews practiced social distancing as guidelines and recommendations were in place by the Ontario Ministry of Health. Marketing partners of the Lockdown Showdown included Bicknell Racing Products, Maxima Racing Oils, and Shadow Auto.com.

The speedway would like to thank all our marketing and media partners for their continued support of racing at the historic Port Colborne, Ontario oval.  The Club 54 Weekly Racing Series features the Cosco Haulage DIRTcar Sportsman, Pro Fabrication Late Models, JC Auto Thunderstocks, and the Glo & Go Tanning Mini Stocks. In 2020, the Pro 4 Trucks will be racing with the Mini Stocks.