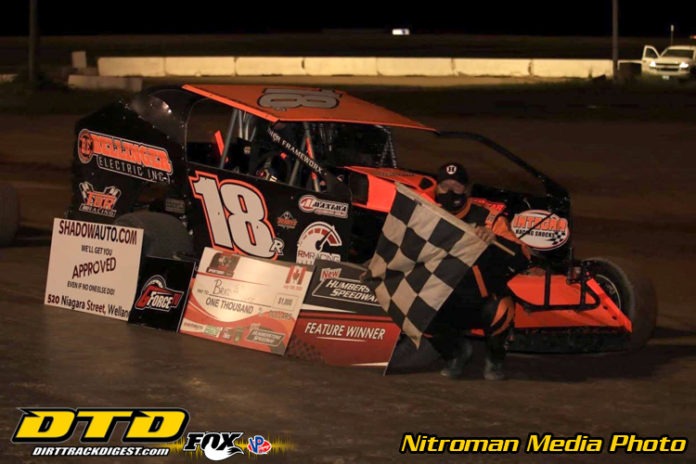 Reigning Cosco Haulage DIRTcar Sportsman track champion Brad Rouse and veteran Luke Carleton were on the front row for their 25-lap main event with Rouse taking the lead. Rob Sauder would challenge Carleton with Justin Sharp and Greg Panunte racing in the top five. Sauder would take the runner up spot away from Carleton on lap two. Panunte would battle with Sharp for fourth place for several laps, just as Rouse would continue to pull away from the field. The yellow lights would come on for the first time on lap nine as Dave Flannigan Jr spun in turn four. Rouse would once again pull away from the field on the restart as Carleton and Panunte pulled away from Rob Sauder to take over second and third, respectively. Mid-pack, Chad Chevalier, James Michael Friesen, and Mike Bowman started to work their way through the field. Justin Sharp spun, in turn, one to bring out the caution on lap 15. On the restart, past track champion, and reigning BEI Lightning Series Champion Chad Chevalier moved into third place and would then go after Carleton for second place. Chevalier would move into second with four laps remaining, with Adam Leslie running in fourth place. Chevalier would close in on Rouse in the late going, but Rouse would go on to score the win. Carleton, Leslie and Panunte would complete the top five. “It really was the luck of the draw to help us get back to victory lane” stated race winner Brad Rouse. “It definitely sucks without the fans and we hope to get them back soon” Rouse added. “We had our car dialed in and got better as the race went on” stated runner up finisher Chad Chevalier. “Absolutely, I’m glad to be on the podium tonight” stated third-place finisher, Luke Carleton.

Josh Hansen and Darren Dryden was on the front row in round two of the 2020 Action Sprint Tour season with Dryden taking over the lead with Jacob Dykstra, and Tyler Winger racing in the top four. Allen Downey stopped on the back straightaway with issues to bring out the caution. Dryden would take off in the lead, as Jacob Dykstra taking over second place. The top three of Dryden, Dykstra, and Hansen were racing close together while running through lap traffic. Dykstra would take the lead going down the back straightaway with eight laps remaining. Hansen would take second away from Dryden with four laps remaining, but Dryden would battle back for the position. Dykstra would go on to score the win over Hansen and Lucas Smith. Dykstra has won both events for the Action Sprint Tour as part of Operation Green Flag. “It’s cool to win here at Humberstone as I grew up here and it’s special every time I win here” stated race winner Jacob Dykstra.

Charlie Sandercock wasted no time from his outside front row starting spot to take the lead at the drop of the green in the 25-lap Late Model Challenge for the Pro Fabrication Late Models. Jason Haskell spun in turn two to bring out the races’ first caution. Sandercock would take off as Andrew Hennessy would battle for the second position with Jim Dale Jr. Hennessy would take over the second position on lap eight, as Sandercock continued to stretch his lead over the field. John Pinsonneault brought out the caution on lap 11 after spinning on the top side of turn one. Sandercock and Hennessy would pull away on the restart, settling the battle for the lead from themselves. Greg Haskell, Tim Gillespie, Ryan, and Kevin Goudie got together in turn two to bring out the caution once again. Sandercock would once again pull away from the rest of the field. Sandercock would go on to score the win, over Hennessy and John Pinsonneault, who came back from an early race spin to complete the top three.

Kyle Rothwell and Austyn Werstroh were on the front row for the 20-lap feature for the Glo & Go Tanning Mini Stocks with Rothwell taking the lead as Go Fast Teeple, Craig Vlasic and Evan Curtis raced in the top five early on. Jason Tolton and Dylan Llord came together in turn two to bring out the first caution on lap four. On the restart, Rothwell would continue to show the way over Werstroh with Teeple running in third. Mark Bazuin had right front damage after contact with Matt Christie to bring out the second caution of the race. Jay Moulton would race with Vlasic for third as Rothwell continued to lead. Werstroh would take the lead away on lap eight, as Moulton and Evan Curtis challenged Rothwell for the second position. Curtis would take second away from Moulton at the halfway mark, just as the leader would hit lap traffic. Dave Small spun in turn three with five laps remaining, causing the caution to fly once again. Curtis would challenge Werstroh on the late-race restart, looking underneath in turns one and two but was unable to complete the pass. Kevin Conley spun in turn two to bring out the caution with two laps remaining. The green-white-checkered restart would see Werstroh keep the lead as Werstroh would hold off Curtis to score the win. Jay Moulton would finish in third place. “This is just amazing” stated Werstroh in victory lane, celebrating his first win at Humberstone.

The speedway would like to thank all our marketing and media partners for their continued support of racing at the historic Port Colborne, Ontario oval. The Club 54 Weekly Racing Series features the Cosco Haulage DIRTcar Sportsman, Pro Fabrication Late Models, JC Auto Thunderstocks, and the Glo & Go Tanning Mini Stocks.