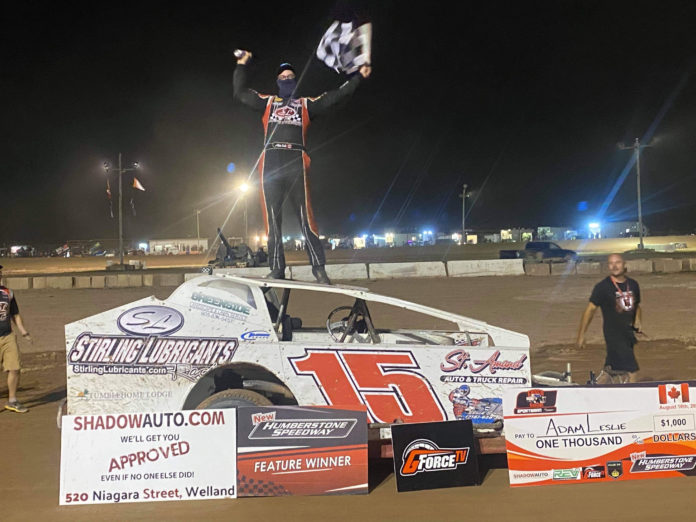 The Cosco Haulage DIRTcar Sportsman feature saw former track champion and Mr. DIRT titlist Cody McPherson lead the field to green alongside Tyler Puchalski. McPherson lead early until a chain-reaction crash that began with Jeff Panunte almost spinning, in turn, four while running in the top five, brought out the caution. On the restart, Adam Leslie, who started the race 4th after winning his heat race earlier in the night, ran down McPherson. The two battled for the lead for a few laps, before Leslie was able to clear the 777 of McPherson and drive away. Behind the two leaders, James Michael Friesen, who won his heat race as well, Greg Panunte and Chad Chevalier has a great battle of their own to settle the top 5. Leslie would drive away from McPherson to win, while Chevalier, James Michael Friesen, and Greg Panunte completing the top five.

Josh Hansen and Liam Martin would share the front row for the 20-lap A-Main for the Action Sprint Tour. Things got wild early as multiple cars hoped the cushion and tangled off of Humberstone turns three and four, leading to a lengthy caution period. Once the race returned to green, Hansen showed his speed, driving away from the pack and lapping multiple cars. Caution fell once again erasing the lead Hansen had built. With the field on his tail once more, Hansen proved to be too strong on the restart and raced his way to the checkered flag over Jacob Dykstra who settled for 2nd after winning his heat race. Liam Martin finished in third with Paul Klager and Steven Beckett rounding out the top five.

The JC Auto Thunderstocks got underway with Chris Hale on the pole alongside Ken Sargent. Hale would lead early fending off challenges from both Sargent and Donny Lampman. Soon Justin Ramsay, who started 5th, made his way up through the field to challenge Hale for the lead. Lampman and Hale were strong early in their heats, picking up wins, but come feature time they were no match for Ramsay. Ramsay took the checkers with Hale settling for second, with Donny Lampman, Ken Sargent, and Mike Thorne completing the top five.

In the Glo & Go Tanning Mini Stock feature, Dylan Llord had luck on his side after narrowly avoiding an accident to find victory. Llord would lead from the pole early but saw his lead diminishing as Austyn Werstroh was charging hard in 2nd. Suddenly, Elyse Leduc spun in front of the leaders off turn two to bring out the caution. Llord was clipped by Leduc but able to keep his truck straight. Werstroh was not so lucky as he plowed straight into the spinning lap car, while multiple cars piled in from behind. Llord held onto the lead on the restart and survived a late push from heat winner Leroy Buscumb to take the win. Buscumb would cross the line in second and be followed by Rodney Rutherford, Fabio Olivieri, and Karl Sault.

Racing took place with 100 fans in the stands via a lottery-style draw and all drivers and crews practiced social distancing as guidelines and recommendations were in place by the Ontario Ministry of Health.

Marketing partners for this event were ShadowAuto.com, Maxima Racing Oils, and Club 54. The speedway would like to thank all our marketing and media partners for their continued support of racing at the historic Port Colborne, Ontario oval. The Club 54 Weekly Racing Series features the Cosco Haulage DIRTcar Sportsman, Pro Fabrication Late Models, JC Auto Thunderstocks, and the Glo & Go Tanning Mini Stocks.

Did Not Start: Emily Puchalski

About Humberstone Speedway: Humberstone Speedway is located just two miles East of Port Colborne on Highway 3, just 17 miles west of the US/Canadian Border at the Peace Bridge (Buffalo/Fort Erie). For more information, please visit us on the World Wide Web at www.humberstonespeedway.com as well as follow us on Twitter @NewHumberstone and like us on Facebook. Don’t forget to bring your portable FM radios and listen to all the action on 89.9FM. You can also call the speedway at (905) 834-4002.