PORT COLBORNE, ON – The Dirt Modified Nostalgia Tour made its first ever appearance at the Humberstone Speedway as part of the track’s prestigious All Canadian weekend this past Saturday night.

Sixteen cars would answer the call for the 20 lap feature with Hamilton, Ontario’s Mark Shadwell and Jeff Ciglich of North Augusta, On on the front row by virtue of their heat race wins. Shadwell would take command for the first several circuits before Ciglich would sneak by along the Speedway’s new guardrail in turns 3 and 4 as Shadwell would drift high.

Ciglich would survive several restarts including a red flag incident that would see the track surface blocked with cars, to capture his first of the season in the former John Stanley ride.

Meanwhile Shadwell would protect his second place position despite heavy pressure from Brockville, On native Matt Barbour and Tim Hegarty of Kingston, On. It would be Barbour completing the podium followed by Hegarty in fourth with Andy Imbeault of Niagara Falls, On would round out the fast five.

The series Stateside heads to Afton Motorsports Park in Afton, NY this Friday night and then a second visit to the ever popular Thunder Mountain Speedway in Center Lisle, NY. Then in 2 weeks time the Canadian group will be making it’s first ever trip to the Southern Ontario Motor Speedway in South Buxton, On on August 14th.

Pit notes: Due to the Covid situation it was the first time in several years for a number of competitors to get a chance to race…Ciglich team making a number of adjustments to both cars with positive results in the feature…Bill Montreuil with transmission woes…Mike Ward engine failure…Hannah Farrell with a rough start in vintage racing with several on track get togethers throughout the evening…Bill Profota remarking on the big differences between his old car and his current ride..Tim Hegarty getting stronger every time out in the car… 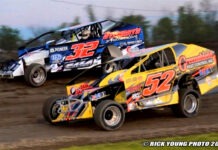 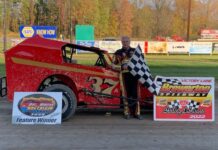 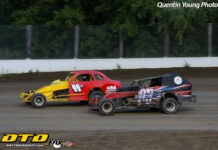