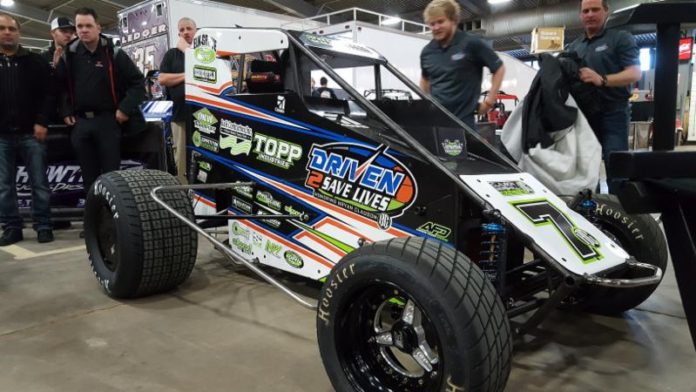 TULSA, OK – Indiana Donor Network announced today it is teaming up with Clauson-Marshall Racing to promote organ, tissue and eye donation and transplantation through Driven2SaveLives®. The campaign, which launched in 2016 around the 100th running of the Indianapolis 500, is now expanding into dirt track racing with the hopes of registering fans to become donors in honor of the late Bryan Clauson.

The announcement came from the pits of Tulsa Expo Raceway, home to the sport’s biggest race of the year and Bryan’s favorite, the Lucas Oil Chili Bowl Midget Nationals. Bryan was a versatile and beloved race car driver, best known for his talent and achievements in dirt track open-wheel racing. Bryan died in August 2016 following an accident in the Belleville Midget Nationals in Kansas. As a registered donor, Bryan saved five lives as an organ donor and will enhance the lives of countless others as a tissue donor.

“While Bryan was known for his on-track persona, the decision he made to be an organ and tissue donor will forever be his legacy,” said Tim Clauson, Bryan’s father and co-owner of Clauson-Marshall Racing. “As a family, we are humbled to honor Bryan and his donation decision through Driven2SaveLives and the racing community we love. What donation did for our family – the light it provided us in our darkest hours – will stay with me for a lifetime. I will be forever grateful.”

The new partnership means the Driven2SaveLives campaign will have a presence at dirt track races around the country in 2017. Indiana Donor Network, one of 58 organ procurement organizations (OPOs) in the U.S., will activate the campaign alongside Donate Life America and counterpart OPOs to spread the lifesaving and healing message of donation and transplantation. LifeShare of Oklahoma is joining Indiana Donor Network at the Chili Bowl Nationals to share Bryan’s story and to help people become registered donors.

“The work we do within the donation and transplantation community is both a privilege and a responsibility – we get to make a difference,” said Kellie Hanner, president and chief executive officer at Indiana Donor Network. “Driven2SaveLives gives race fans a platform to talk about donation and transplantation. This means that everyone who helps to spread this campaign’s message not only gets to honor the donation decision but also gets to be a part of Bryan’s lasting legacy.”

Clauson-Marshall Racing will have six drivers competing in the Chili Bowl: Tyler Courtney of Indianapolis, Indiana; Shane Golobic of Fremont, California; Jason Johnson of Eunice, Louisiana; Donny Schatz of Fargo, North Dakota; and Ricky Stenhouse Jr. of Olive Branch, Mississippi. The sixth driver has yet to be announced. The cars and driver suits will carry Driven2SaveLives branding.

Driven2SaveLives initially started as a partnership between Indiana Donor Network, Stefan Wilson and KV Racing Technology. The goal was to promote organ, tissue and eye donation and transplantation around the 100th running of the Indianapolis 500, in honor of Stefan’s late brother, IndyCar driver Justin Wilson. Justin died in August 2015 from injuries he sustained in a race crash at Pocono Raceway in Pennsylvania. As a registered donor, he saved five people with his gift of life.

FACTS:
* More than 120,000 people nationwide are waiting for lifesaving organ transplants.
* In the U.S., another person is added to the transplant waiting list every 10 minutes.
* Each day, 22 people on average in the U.S. die because a donated organ wasn’t made available in time.
* Approximately 90 percent of Americans support organ donation, yet only 50 percent are registered.
* You can register to become an organ, tissue and eye donor here.
FOLLOW THE CAMPAIGN:
* Facebook: @Driven2Save
* Instagram: @Driven2Save
* Snapchat: @Driven2Save
* Twitter: @Driven2Save
* YouTube: Driven2SaveLives
* Hashtag: #Driven2SaveLives
#