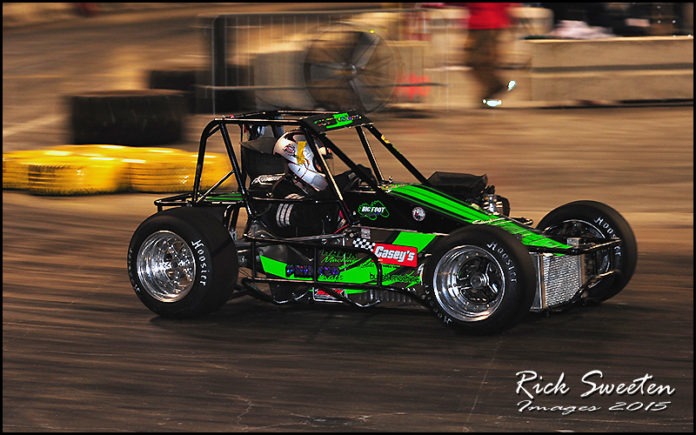 ATLANTIC CITY, NJ – While most of the Indoor Auto Racing Series Presented By VP Fuels stars head into Atlantic City’s Boardwalk Hall on January 27-28, 2017 with race proven equipment, crowd favorite Andy Jankowiak’s quest for a fourth career Indoor Auto Racing Series victory hinges on the successful completion of an all new Three Quarter (TQ) Midget of his own design.

“We’ll be there,” Jankowiak reassured Len Sammons Motorsports Productions (LSMP) Series officials earlier this week. “This is a much bigger challenge than I thought it would ever be, but the car I’m building is built to run fast.”

Jankowiak has enlisted his Modified car owner and fabrication specialist Rick Kluth to bend the tubing, fabricate the brackets and mounting points for the new car.

‘Andy J’ describes the car as “a clean sheet of paper car, simple like (Trey) Hoddick’s car but with some different suspension ideas.

“The only two things we aren’t making in the shop ourselves are the rear and the motor,” Jankowiak revealed. “I built the radiator, the fuel cell, the seat and Rick did all of tube bending and welding.”


Jerry Granetz is the third man in the Jankowiak/ Kluth car building effort.

“When I come to the races, I go to win,” Jankowiak said. “All of the thought that went into this car is for winning.”

Jankowiak vacated the TQ Midget that he had driven in the two previous Indoor TQ races at Trenton, N.J., and Allentown. Pa. He was fast, but ended up with mixed results in Ken Sebring’s No. 21 that will be at the Atlantic City race with NASCAR Whelen Modified Touring Series driver Timmy Solomito making his Indoor racing debut.

TQ Midget drivers Ryan Flores, Erick Rudolph and Tommy Catalano head to historical Boardwalk Hall as pre-race favorites for the 2016-2017 Indoor Auto Racing Series fueled by VP finale. Flores, of Cornelius, N.C., swept both Allentown TQ A-Main 40-lap features, the first TQ Midget wins of his career, after finishing second no less than five times in past years. Rudolph, the defending series champion and winner of the event this year in Trenton, NJ, lost battles for the lead with Flores both nights in Allentown. Catalano failed to qualify for the feature field on Friday in Allentown and then nearly won on Saturday. Catalano shocked everyone when he made a three wide-pass for the lead under Rudolph and Flores mid-way through the feature. A spinout, however, sent him to the rear but he never gave up. He drove back to finish a close second.

Anthony Sesely of Matawan, N.J., who has won four times in Atlantic City including last year’s Gambler’s Classic, is another driver that cannot be counted out despite tough outings in Trenton and Allentown driving for car owner Lou Cicconi.

The schedule of events starts Friday, January 27 with practice at 1:00 pm followed by time trials at 4:30.

Spectator gates open on Friday at 6:30 pm with racing starting at 7:30. The feature attraction will be four 20 lap events for the TQ Midgets with the fastest qualifiers in each event starting in the seventh starting position! Results from time trials held earlier in the afternoon and these races will then set guaranteed starters for Saturday’s Gambler’s Classic as well as important qualifier starting spots. The Slingshots and Champ Karts will also run a series of qualifying races.

The grandstand Saturday opens at 5:00 pm with FanFest taking place on the racing floor for those holding reserved seats. Racing starts at 7:00 pm with a series of TQ Midget qualifiers and a TQ Dash followed by features for the Champ Karts, Slingshots and then the 40 lap TQ Midget Gambler’s Classic.