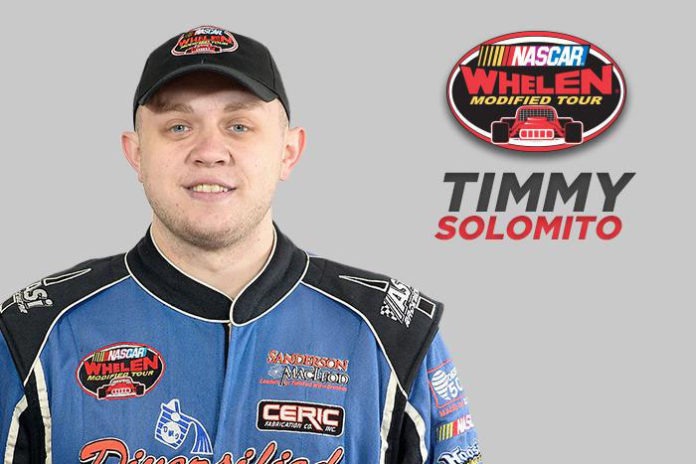 “I know I’ll be starting pretty much from scratch but all race cars are the same. You need to work to make them as fast as they can be,” said Solomito, a winner of four NASCAR Whelen Modified Tour event this year.

The hard charger from Islip, N.Y., believes he has several advantages that will benefit him in his initial TQ quest.

“I ran a few Champ Kart races indoors before so I know what to expect as far as the track,” Solomito said. ”I never won one but had a third once. I like it, but most times I never had much luck finishing.”

Solomito has also been a keen observer of the Len Sammons Motorsports Productions (LSMP) Indoor Racing Series Presented By VP Race Fuels TQ races this season and in past years.

“That helps, running a Kart indoors before and seeing the TQs race from the other side of the fence. You can get a feel for who you will be racing against. What also will help is my experience racing a Legends car for a few years at Riverhead. The motors in the Legends cars are about the same as the TQs. The Legends are heavier cars but I feel knowing the engine will be an advantage for me.”

Solomito has two more aces up his sleeve.

“Justin (Bonsignore) and I are longtime friends. He has been running TQs indoors for a couple of years. and we have talked about a lot of things,” Solomito said of Bonsignore who also won four race on the NASCAR Modified Tour and finished second, one position ahead of him in the standings.

The opportunity for Solomito to drive a TQ came when the seat in Ken Sebring’s No. 21 TQ Midget became available after its driver Andy Jankowiak decided to build his own car for Atlantic City’s TQ race. The car has a fourth place finish to its credit this Indoor season.

“If everything works out, I might buy a TQ for next year,” Solomito tipped. “I’ll see how much I like it in Atlantic City.”

Since Solomito missed the first two Indoor Auto Racing Series Presented By VP Race Fuels events at Trenton, N.J., and Allentown Pa., he will not be a contender for the season points championship. Ryan Flores, Erick Rudolph and Jimmy Blewett head to historic Boardwalk Hall as pre-race title favorites. Flores, of Cornelius, N.C., swept both Allentown TQ A-Main 40-lap features, the first TQ Midget wins of his career, after finishing second no less than five times in past years. Rudolph, the defending series champion and winner of the event this year in Trenton, NJ, lost battles for the lead with Flores both nights in Allentown. Blewett is third in points, three behind Rudolph but 80 out of first place held by Flores. Drivers earn points in time trial and preliminary races in addition to the feature.

Anthony Sesely of Matawan, N.J., who has won four times in Atlantic City including last year’s Gambler’s Classic, is another driver that cannot be counted out despite tough outings in Trenton and Allentown driving for car owner Lou Cicconi.

The schedule of events starts Friday, January 27 with practice at 1:00 pm followed by time trials at 4:30. Spectator gates open on Friday at 6:30 pm with racing starting at 7:30. The feature attraction will be four 20 lap events for the TQ Midgets with the fastest qualifiers in each event starting in the seventh starting position! Results from time trials held earlier in the afternoon and these races will then set guaranteed starters for Saturday’s Gambler’s Classic as well as important qualifier starting spots. The Slingshots and Champ Karts will also run a series of qualifying races.

The grandstand Saturday opens at 5:00 pm with FanFest taking place on the racing floor for those holding reserved seats. Racing starts at 7:00 pm with a series of TQ Midget qualifiers and a TQ Dash followed by features for the Champ Karts, Slingshots and then the 40 lap TQ Midget Gambler’s Classic.

Prices do not include $2 facility fee or online ticketing fees.