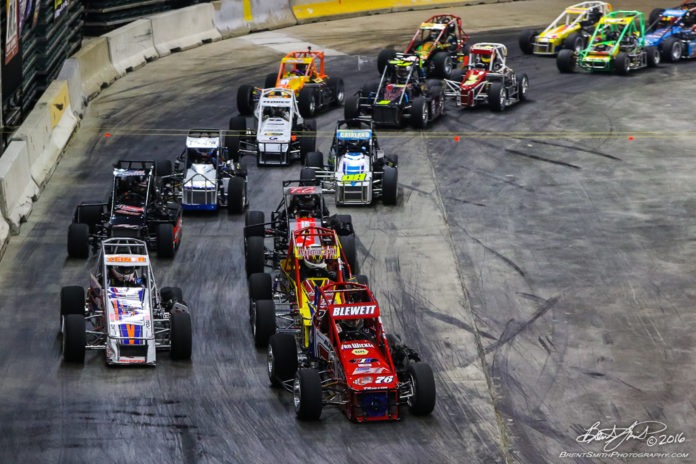 ATLANTIC CITY, NJ – NASCAR driving talent Ryan Preece will be heading to Atlantic City this week on a mission. After being fast in practice the last three years for the NAPA Know How race weekend held inside famous Boardwalk Hall, Preece has had problems that have kept him from the starting line-up of the Gambler’s Classic. This year, the Berlin, Conn. driver who competed full-time on NASCAR’s Xfinity series in 2016, hopes to not only be part of the 24 car starting field but win the 15th running of the race.

Preece will be among more than 80 drivers competing in TQ Midgets this weekend, Friday and Saturday, January 27th and 28th.

“I’ve never had any luck at Atlantic City with the Three Quarter Midgets (TQs),” Preece said. “I’m looking to turn it around this year.”

Preece, 26, is coming off one of the most unusual and challenging seasons of his career racing full-time on the NASCAR Xfinity Series.


“I felt like I did everything I could with what I had to work with,” Preece said. “It wasn’t going to go anywhere. I’m used to running up front, not just being in the field.”

TQ Midget racing, something Preece has done on and off for the past four years, is back on the front burner for him this weekend in Atlantic City.

The car Preece will be driving is the same one that he has driven in each of his previous Indoor races. The car is partially owned by Preece’s NASCAR Whelen Modified owner, Eddie Partridge, and will carry Partridge’s number, six, and his white and black colors. Donny Preece, Ryan’s second cousin, will assist Ryan’s father Jeff in the pit area. Donny was one of the team principals instrumental in orchestrating Ted Christopher’s remarkable run of eight Indoor TQ feature wins over time.

It’s a TQ Midget Preece has been fast with until problems have sidelined him the last two years.

“It is a DART chassis that we bought from Mike Roselli,” Preece said. “The front and rear suspensions are pretty much the same as they were when we bought it. Chassis Dynamics straightened it after the last crash we had with it.”

Preece never got out of Thursday’s closed practice sessions the first two years. In 2014 he blew the motor in his car and the following year he hopped a wheel and crash hard. His frustrations continued last year.

“I was racing to qualify when a wheel came apart and I crashed,” said Preece. “I fixed the car and Saturday night was fast and in a qualified spot until the alternator shorted out and the battery died.”

Preece, who will contend for the NASCAR Whelen Modified Touring Series championship this year, will have some tough competition to deal with all weekend.

Flores swept the most recent TQ Midget races on December 30-31 in Allentown, Pa., and comes into Boardwalk Hall as the Indoor Auto Racing 2016-2017 Series point leader.

Rudolph raced to victory in the December, 2016 Series opener in Trenton, N.J. and is the defending Indoor Auto Racing Series point’s champion.  He has won seven previous TQ Indoor racing events in his career.

Fifty Champ Kart and forty Slingshot entries have also been filed for the event under card races.

Spectator gates open on Friday at 6:30 pm with racing starting at 7:30. The feature attraction will be four 20 lap events for the TQ Midgets with the fastest qualifiers in each event starting in the seventh starting position! Results from time trials held earlier in the afternoon and these races will then set guaranteed starters for Saturday’s Gambler’s Classic as well as important qualifier starting spots. The Slingshots and Champ Karts will also run a series of qualifying races.

The grandstand on Saturday opens at 5:00 pm with FanFest taking place on the racing floor for those holding reserved seats. Racing starts at 7:00 pm with a series of TQ Midget qualifiers and a TQ Dash followed by features for the Champ Karts, Slingshots and then the 40 lap TQ Midget Gambler’s Classic.

Prices do not include $2 facility fee or online ticketing fees.