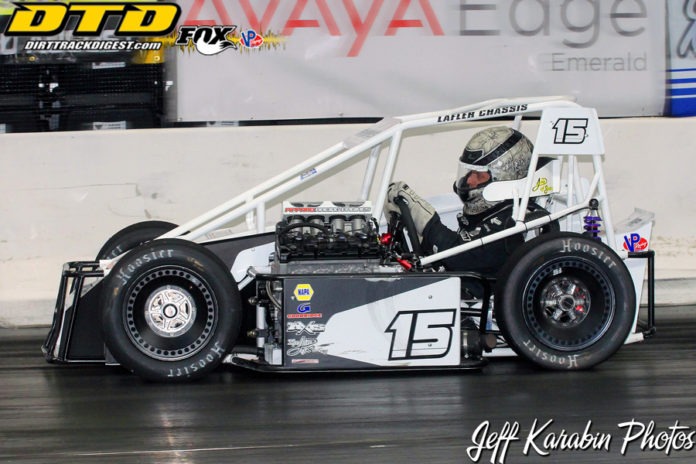 ATLANTIC CITY, NJ – With nothing at stake except the right to proclaim supremacy in practice, Ryan Flores of Cornelius, N.C., outran fifty (Three Quarter) TQ Midgets to post fastest time of 8.018 seconds in Thursday night practice. More than half of the expected 90 TQ Midget teams participated in the optional four-and-a-half-hour session that also offered the two support classes, Slingshots and Champ Karts, track time.

The track practice was the first of three days of the 15th Annual NAPA Know How Racing Weekend inside Atlantic City’s Boardwalk Hall.

Flores’ lightning quick time came in the last of six practice periods and bested Ted Christopher of Plainville, Ct., who stopped the clocks in 8.048 to end up second. Jimmy Blewett, Howell, N.J., ran an 8.065 best lap, Justin Bonsignore, Holtsville, N.Y., an 8.099 circuit and Zane Zeiner, Bath, Pa., closed out the top five with an 8.152.

“We were chasing the car and chasing the track,” Flores said. “I really couldn’t figure out what the track was going to do and how we should set up the car to handle it. We got it right at the end.”

Christopher became faster relative to the others in each session each time he took to the track except in the final one when Flores and Bonsignore passed him.

“We never put new tires on the car,” Christopher said. Nor did Blewett, Bonsignore, or Zeiner.

Crowd favorite Andy Jankowiak, Buffalo, N.Y., debuted a new car in practice for the Boardwalk Hall racing but the machine was bedeviled with brake and engine problems.

A team car to Sesely’s, which was intended as a backup mount, was instead shaken down by Mike Lichty, a popular Innerkip, Ontario `Canadian driver who had not raced in the previous Indoor Auto Racing Series events this year.

The one lap track record for Boardwalk with a TQ Midget was set on Friday, January 29, 2016 by Ryan Flores with a mark of 7.937 seconds. It is a mark that is all but certain to fall tomorrow in time trials.

Twenty-seven Slingshots from an entry of 40 used Thursday practice to test their cars as did seventeen of 40 Champ Kart teams.

In Slingshots, Trenton feature winner Anthony Raisner, 2016 Boardwalk Hall feature winner Dan Spellmon and perennial contender Kyle Herve were atop the time charts in the three Slingshot practices while Cale Ross was at the top of the class in the first two Champ Kart practices.

The practice produced no serious accidents although Champ Kart driver Tyler Tank had the indignity of crashing twice in the same practice session after his steering wheel worked itself loose.

On Saturday, the racing begins in earnest for spectators at 5:00 when Fan Fest takes place on the track. Fans will have the opportunity to meet all of the drivers, take pictures and receive autographs.

When racing begins at 7:00 PM, the final qualifiers will be selected through heat races for the TQ Midgets. The first of three features follows with 24 Champ Karts racing for 25 laps. The Slingshot feature, also with 24 cars and drivers running a 25-lap feature follows.

The headline event is the 15th running of the Gambler’s Classic TQ Midget A Main, a 40-lap event starting 26 cars.

Good seats remain available for both the Friday and Saturday night races.