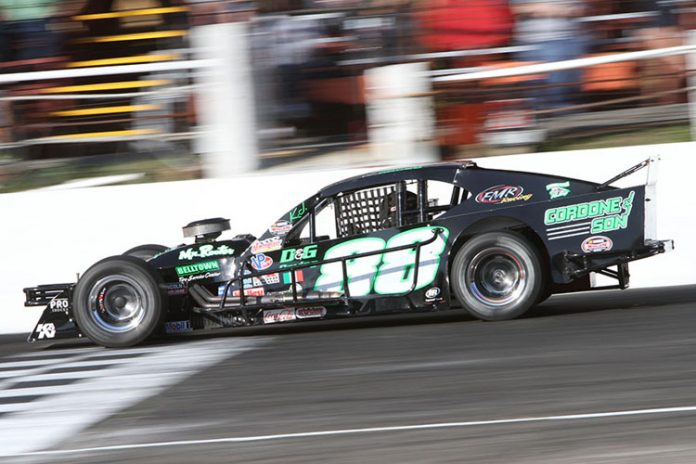 Rocco, who has never driven a Three Quarter Midget nor raced indoors, has acquired the car Ryan Preece has raced in recent Indoor races with considerable success.

Preece recently announced that he will drive the car now solely owned by Donnie Preece, Ryan’s uncle, in the three-race Indoor Auto Racing Series. Donnie Preece acquired sole ownership of the car from the late Ted Christopher’s wife Quinn shortly after the racing legend’s death in a private plane crash.

With a top car underneath him, Rocco, of Wallingford, CT, who won track championships this season at Waterford Speedbowl, Thompson Motorsports Park and Stafford Motor Speedway, is certain to rank among the pre-race favorites.

Rocco will be in the field when the series opens for 2018 at the PPL Center in Allentown, PA., for the Ironton Telephone sponsored events on Friday and Saturday, January 5 and 6. He will return to the NAPA Auto Parts Indoor Auto Racing Weekend in Atlantic City, NJ, on January 26 and 27. Then, Rocco will then square off in neutral territory in the first ever Indoor race event in New York State, set for February 9-10, 2018 in the Times Union Center in downtown Albany, N.Y.

To succeed, Rocco will have to go up against experienced indoor TQ Midget drivers in what is a very specialized racing discipline.

New Jersey native Ryan Flores of Mooresville, N.C., will be racing his No. 15 Lafler TQ Midget at Wall Stadium’s Turkey Derby in the TQ Midget feature over Thanksgiving Day weekend in preparation for the indoor opener.

Flores has spent his working life in NASCAR’s upper tier series. He currently works on the Woods Brothers No. 21 Monster Energy NASCAR Cup Series team driven by Ryan Blaney.
When Blaney moves from the Wood Brothers Ford to a third team owned by Roger Penske in 2018, Flores and the rest of the team will move with Blaney to the No. 12 car.

Also a contender for victories and the championship is Jimmy Blewett of Howell, N.J., recently crowned Wall Stadium 2017 Modified champion. Blewett has been a contender for Indoor Auto Racing Series victory for five years but has yet take the checkered flag.

You never can rule out Erick Rudolph of Ransomville, NY. An eight time winner and three time Indoor Racing Series champion, Rudolph was a close second to Flores in last year’s title chase. He will be coming off a career best outdoor season on dirt that produced 17 wins and the BRP Modified Tour championship.