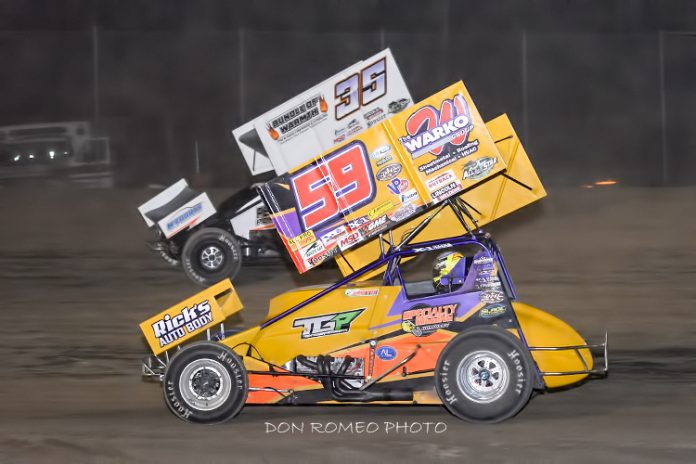 TRENTON, NJ – Ryan Smith, who ranked second in the 2017 All Star Circuit Of Champions 410 Sprint Car circuit, has filed an entry to compete in the first East Coast Dirt Nationals coming up in two weeks at the CURE Insurance Arena in Trenton, N.J. on Friday and Saturday, December 1st and 2nd.

The ‘Kunkletown Kid’ for his lifelong residency in the small Pennsylvania hamlet, Smith enjoyed a breakout season with the All Stars, winning three races and outpointing almost 300 other drivers from across the country except Ohio’s Chad Kemenah, the circuit champion.

As a third generation race driver – his father Randy and grandfather Roy preceded him in racing – Smith understands how important it is to be able to connect and communicate with his crew as well as his fans.

Smith’s Sprint Car prowess was recognized in consecutive years at Williams Grove Speedway where he earned Most Improved Driver accolades.

Indoor Auto Racing Series competition will be nothing new to Smith. In fact, he has one of the most consistent performance records of any driver in Atlantic City’s Boardwalk Hall.
Beginning in 2009 through 2013, Smith authored top five finishes in A-Main events, all the while driving a Micro 600cc Sprint against the heavily favored asphalt TQ Midgets.


Smith will be back in his element in the CURE Insurance Arena driving indoors once more in a Micro 600cc Sprint. Joel Smith (his cousin) owns the car which will carry the family’s iconic No. 555 on the tail.

Native Californian Danny Stratton, who has spent most of 2017 racing in the Midwest on the POWRi Midget circuit, has also entered the event.

Though Stratton has run Sprint Cars with considerable success, his forte has been in Midgets, He owns two career USAC National Midget wins and eight USAC Western States Midget checkereds.

In 2016, Stratton ran most of the USAC/ARDC circuit, finishing ninth in points with a top finish of second at Lebanon, Pa.’s Linda’s Speedway on July 1.

The field also includes the best drivers and teams from Micro Sprint racing. In fact, one Micro Sprint car owner is so sure one of the division regulars will win the event, he’s willing to put his money on it. Should any non-regular of 600cc Micro Sprint racing win Saturday’s feature event the car owner will add a $500 bonus to the win total.

Though the East Coast Indoor Nationals is a new attraction, the CURE Insurance Arena (formerly Sun National Bank Center), has hosted TQ Midget racing for the past four years on the arena’s concrete floor.

The racing schedule will tentatively call for heat races with passing points and four A-qualifier feature races on Friday night. On Saturday it will be “alphabet mains,” with racers having the opportunity to advance from twin F, E, D, C and B-mains to the 40 lap “A” feature.

The agenda calls for racing to start at 7 p.m. on Friday and 5 p.m. on Saturday.
Oliver Communication Group (OCG) of Bordentown, N.J. has signed on as an associate sponsor of the event. Other sponsorship packages remain.