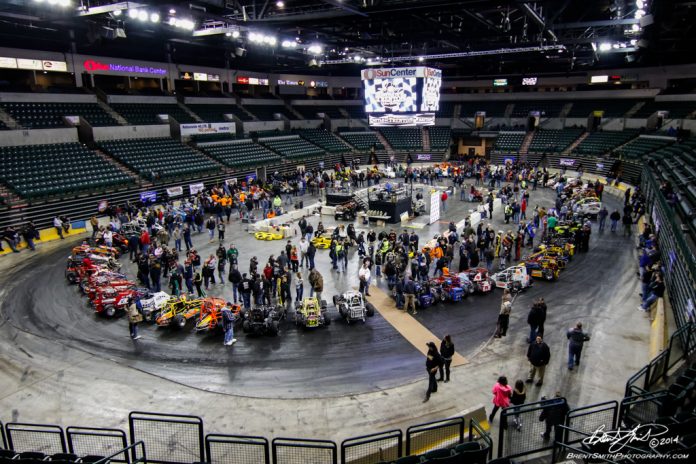 TRENTON, NJ – Construction began on Monday morning inside Trenton’s CURE Insurance Arena for this weekend’s first East Coast Indoor Dirt Nationals. The two day event, this Friday and Saturday December 1 and 2, followed the Disney On Parade show which moved out following two shows on Sunday at the venue.

The work was completed on Monday to allow 60 dump trucks of clay to be laid on the floor starting at 7 a.m. on Tuesday morning. Heavy equipment began to arrive at the arena last week to be in position to work the clay into a smooth surface, with banking, prior to a closed door test session with the 600cc Micro Sprint racers Thursday evening.

Clay for the racing surface was kept in the ground until Monday to keep it free of moisture and possible frost. The rich black clay was extracted from the same pit used successfully for years at the East Windsor Speedway. Its supply was located thanks to the help of former speedway track director Butch Jones.

Indoor racing has been held at the arena, formerly known as the Sun Bank Center, since February of 2014. Three Quarter Midget (TQ) racing inside Atlantic City’s Boardwalk Hall was first held in 1965. This weekend’s event, however will be the first ever indoor event held in the state using a dirt track surface.


Anticipation is running high. Over 90 600cc Micro Sprints have entered and while there has been a brisk pre-sale, plenty of good seats will be available for both Friday and Saturday night programs. Ticket lines at arenas, however, can often be long and slow so it’s recommended that spectators arrive in ample time before Friday’s 7 p.m. start and Saturday’s 5 p.m. first green flag. It’s expected that Saturday’s main events won’t see the track until after 8 p.m.

The uniqueness of racing Micro 600cc Sprints indoors, on dirt, has attracted an impressive and diverse field of competitors, including to some of the most familiar names in racing.
Chief among them is six time and reigning Lincoln Speedway 410 Sprint champion Brian Montieth of Phoenixville PA., whose nickname, ‘The Edge’, is derived from his exciting driving style.

Also entered is Ryan Smith of Kunkletown, PA, whose background in Micro Sprint racing schooled him well for his rapidly developing career in 410 Sprint racing. Smith was second in the 2017 All Star Sprint Circuit Of Champions standings.

California native Danny Stratton, who has spent most of 2017 racing in the Midwest on the POWRi Midget circuit, is entered. Stratton raced with ARDC in the northeast in 2016 while basing out of Reading, PA.

New York State 360 Sprint Car drivers Scott Kreutter and Joe Trenca are in the field.
One of the most intriguing entries is that of Anthony Sesely, the Matawan, N.J., paved track specialist who has won three times indoors, with his Micro against the TQ Midgets on the concrete arena floor of Atlantic City’s Boardwalk Hall.

Entries have already been received from competitors in New Jersey, Pennsylvania, New York, Delaware, Colorado, Connecticut, North Carolina, Massachusetts and New Hampshire.
The ‘big names’ will battle the tested-tough Micro Sprint racers who compete wheel to wheel on dozens of tracks throughout the northeast in what promises to be a fascinating ‘race-within-a-race’.