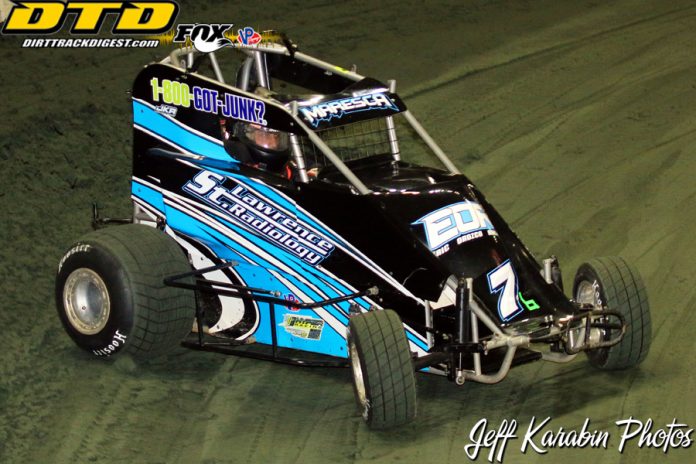 TRENTON, NJ – Some seventy of the Micro Sprint drivers and cars that will be competing in the first East Coast Indoor Dirt Nationals this weekend inside CURE Insurance Arena in Trenton, N.J., got in their first laps in on Thursday night, starting at 7:00 PM in a practice session.

All of the drivers were among the first on the track in the first of two practices for the field.
Quick time in the second group was registered by Luke Thomas of Wyoming, DE (11.535) which would have been 39th fastest among the first group. Changing track conditions caused the dustless, smooth clay surface to slow down throughout the night. There were no major crashes or incidents in either session.

Indoor Auto Racing Series officials announced following the Thursday session that three practice periods for all entrants, rather than the previously scheduled two, will be conducted on Friday prior to qualifying.


East Coast Indoor Dirt Series racing gets underway in earnest on Friday, December 1, 2017. Beginning at 7:00 PM, nine heat races of ten laps each in length, will begin the selection of the top 24 cars for the Saturday night A-Main. Spectator arena gates swing open at 6:00 PM.

Following the heats, four A-Qualifiers, each of 15 laps, will transfer the top three finishers directly into Saturday night’s A-Main. The rest of the finishers remain eligible for the remaining 12 feature starting spots which will be determined through a series of “Alphabet Mains”. Each of these ten lap races, ten in all, run Saturday.

The top two finishers in each race advance into the successive race at the back of the field. The ‘Alphabet Mains’ culminate in the running of two B-Mains, with the top six finishers in each joining the twelve Friday Night A-Qualifiers to form the 24-car starting field.
That sets the field for the first annual East Coast Indoor Dirt Nationals.

The race is the first of four Indoor Auto Racing Series events and the only one to be run on a dirt track.

The scene shifts to the PPL Center in Allentown, Pa., on January 5-6, 2018 with the running of the Ironton Telephone TQ Midget event. The scene shifts to January 26-27, 2018 to Atlantic City, N.J., for the 15th annual running of the prestigious Gambler’s Classic. The finale is set for February 9-19, 2018 at Times Union Center in Albany, N.Y. for the inaugural Indoor Auto Racing TQ Midget race, where the 2018 Indoor Auto Racing Series Fueled By VP Racing Fuels 2018 champion will be crowned.