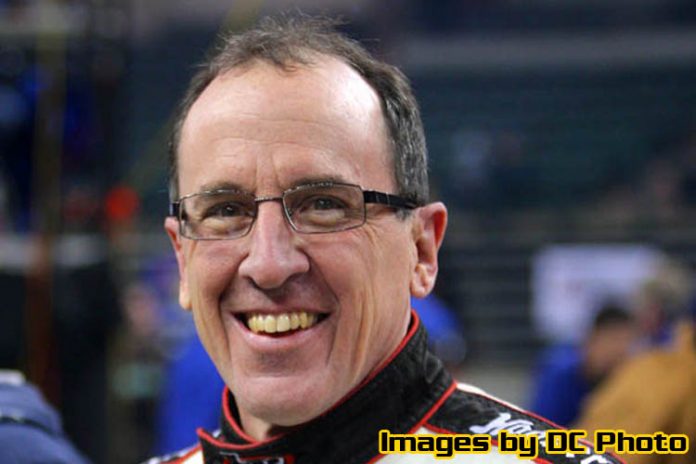 ALLENTOWN, PA – Drivers entered in this weekend’s Indoor Auto Racing Series fueled by VP 2018 opener at the PPL Center in Allentown, Pa. will have extra incentives to succeed.

Drivers in three divisions who will be running over two days in the Ironton Telephone/ Avaya sponsored events, Friday and Saturday January 5 and 6, will be racing not only for purse money offered but also special bonus incentives and season ending series awards.

A special glass “TC Cup” mounted on a wooden base has been designed. The first of these TC Cups will be presented to 2017 champion Ryan Flores. The 2018 TC Cup will go to the high point driver after the two events in Allentown, the NAPA Know How Weekend inside Atlantic City’s Boardwalk Hall (January 26 and 27) and the series finale at the Times Union Center in Albany, NY on February 9 and 10 have been completed.

Over 50 TQ Midget teams are entered for the two nights of Allentown competition. Flores, of Mooresville, N.C., who swept both races in Allentown last year on the way to the championship is among the favorites.


The TQ Midgets headline the card both nights with racing starting at 7:30 p.m. on Friday and 7 p.m. on Saturday.

Prior to the start of the event a special memorial tribute to TC, a winner of eight Indoor Series events, will be conducted involving all of the competitors. Saturday’s program begins with a Fan Fest on the speedway to fans who have selected the free ticket option to attend this restricted event.

When racing begins there will be plenty of incentives on the line right from the start.

Doggy Style Hot Dogs, a new eatery in the Allentown area, will give the TQ driver with the best overall combined finish of both days $500.

Bob Hilbert Sportswear of nearby Boyertown, Pa., has posted $250 to the driver who leads the TQ Midget feature event each night at half-way.

Saturday heat winners will get $50 each thanks to sponsorship by Leindecker Racing Engines of Center Valley, Pa.

On Friday, the Champ Karts invade for a complete show.  Well over 30 entries have been filed for events sponsored by Hoosier Tire. The Champ Kart Hard Charger will get $150 from E. Schneider & Sons, Inc. Four Hoosier tires will also be given away.

On Saturday, the Slingshot division backed by the Action Track USA at the Kutztown Fairgrounds, will join the TQ Midgets. A full field of over 30 entrants is poised for action.  The Slingshot Hard Charger will get $150 thanks to E. Schneider & Sons, Inc.

For choice tickets, contact the PPL Center Box Office by phone at 610-347-TIXX (8499), online at pplcenter.com. Those wishing to avoid online fees may purchase directly at the Box Office, but are encouraged to do so in advance to avoid possible box office lines the day of the event.

Information including ticket and hotel links is available at indoorautoracing.com.