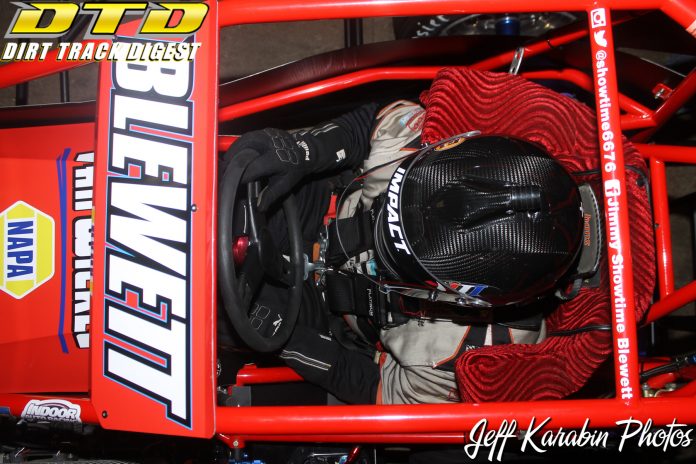 ATLANTIC CITY, NJ –  Versatile Jimmy Blewett, whose racing resume of 125 career feature wins includes victories on both asphalt and dirt, is ready to race in the NAPA Know How Weekend inside Atlantic City’s Boardwalk Hall over the January 26th and 27th weekend.

“I didn’t have my own car ready for the Allentown race and spent the weekend helping my friend Ryan Flores with his car,” Blewett, who races out of Howell, N.J., said. “Now, the red, white and blue No. 76 is ready to win.”

Blewett’s talent as Flores’ setup man in Allentown was evident when Flores moved to the front of the field in both races. A slow tire leak and a cracked oil filter took Flores out of the lead late in each of the two races.

Blewett and well over 70 other Three Quarter (TQ) Midget drivers will be seeking victory in the prestigious Gambler’s Classic, a race first run by Len Sammons Motorsports Productions in 2003.

Only eight men have won the Gambler’s Classic. Anthony Sesely and Erick Rudolph have dominated the recent event history, each winning three of the last six Classics.

Blewett won ten times in three different classes of race car this past season at Wall (NJ) Stadium en route to winning the Modified championship, his first at the speedway in 15 years.

The fiery speedstar, whose nickname is ‘Showtime’, will go to post in Atlantic City aboard a Lafler chassis TQ Midget with a Dave Orange-prepared engine.

That’s a situation that could very well change, particularly in light of the fact that at the 2018 Indoor Auto Racing Series opener over January 5th and 6th, Justin Bonsignore, of Holtsville, N.Y., and Scott Kreutter, of Buffalo, N.Y., two drivers who had been trying for their first wins as long as Blewett has, each won for the first time.

Both Bonsignore and Kreutter are expected to provide Blewett with plenty of competition, as will Erick Rudolph, Ransomville, N.Y., an eight time Series past winner who didn’t score at Allentown but finished second and third in the pair of feature events.

The quest for victory in the prestigious NAPA Know How weekend will begin on Friday, January 26th, with TQ Midgets racing in four 20 lap events to determine the front end of the starting lineup for Saturday’s Gambler’s Classic.

The unpredictible Slingshots and agile Champ Karts will also run Friday night events that will also help set their line-ups for Saturday races.

On Friday, January 26th doors will open for spectators at 6:00 PM with racing starting at 7:30.

The Saturday schedule calls for doors to open at 5:00 PM with racing starting at 7:00 PM.

The early opening of the Boardwalk Hall doors Saturday is to allow fans extra time to visit ‘Fan Fest’, a fun and exciting time for fans of all ages to meet the drivers and car owners, have their souvenir programs and event shirts autographed and have pictures taken with their favorites before the racing starts.