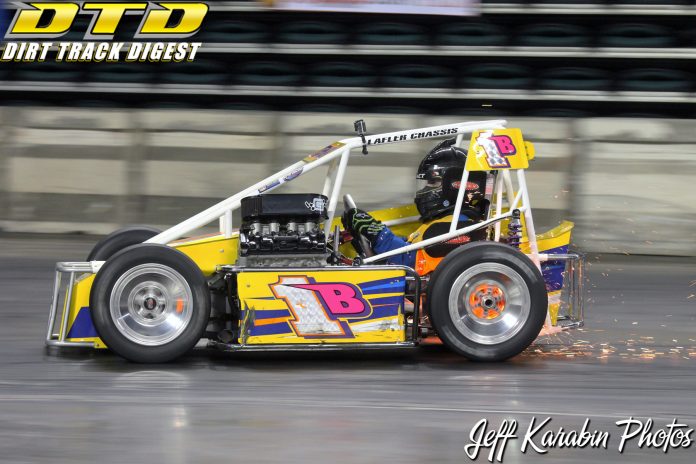 ATLANTIC CITY, NJ – The most prestigious Indoor Auto Race meet in the east, the Atlantic City NAPA Know How Indoor Race, is ready to roar inside Boardwalk Hall this Friday and Saturday January 26 and 27 with the most coveted prize of all, the Three Quarter (TQ) Midget Gambler’s Classic victory, at stake.

Only eight men have won the Gambler’s Classic since its first race in 2003. Anthony Sesely of Matawan, NJ and Erick Rudolph of Ransomville, NY. have dominated the recent event history, each winning three of the last six Classics

Both are entered in this year’s race and are among the favorites.

Payne is an entrant in this year’s race along with his son Anthony. Cicconi is not driving but has entered several cars as an owner.


The NAPA Know How Weekend and the Gambler’s Classic is part of the Indoor Auto Racing Series Fueled By VP Racing Fuels.

Ryan Flores of Cornelius, NC is the defending Series champion. He will be joined in Boardwalk Hall by Jimmy Blewett of Howell, NJ, who maintains Flores’ TQ Midget. Blewett missed the Series opener earlier this month in Allentown, PA while Flores was leading both features late in the race when a slow tire leak and a failed oil filter ended his bids in each race.

Justin Bonsignore of Holtsville, NY and Scott Kreutter of Buffalo, NY are also expected to be extremely competitive, having each won a TQ Midget feature in the Allentown opener. Over 70 TQ entries are expected.

The quest for victory in the prestigious NAPA Know How weekend will begin on Friday, January 26th, with TQ Midgets racing in four 20 lap events to determine the front end of the starting lineup for Saturday’s Gambler’s Classic. Each of the 70 TQ’s entered will compete in what often is the best races of the weekend on Friday night.

The unpredictable Slingshots and agile Champ Karts will also run Friday night events that will help set their line-ups for Saturday races.

The Slingshot division promises to be a wide open affair. with defending race winner Gary Hieber, Jr. not entered this year.

On Friday, January 26th doors will open for spectators at 6:00 PM with racing starting at 7:30.

The Saturday schedule calls for doors to open at 5:00 PM with racing starting at 7:00 PM.

The early opening of the Boardwalk Hall doors Saturday is to allow fans extra time to visit ‘Fan Fest’, a fun and exciting time for fans of all ages to meet the drivers and car owners, have their souvenir programs and event shirts autographed and have pictures taken with their favorites before the racing starts.

Good seats remain available for both nights of action through Ticketmaster or at the Box Office.

The Indoor Series finale will be a first annual event in New York State, on Friday and Saturday night February 9th and 10th in the Times Union Center in downtown Albany, N.Y. Both events in Albany will be complete shows with features each night for the TQ Midgets and the Slingshots. Champions will be crowned after Saturday night’s main events.

Complete information on all events is available at the series web-site, indoorautoracing.com.