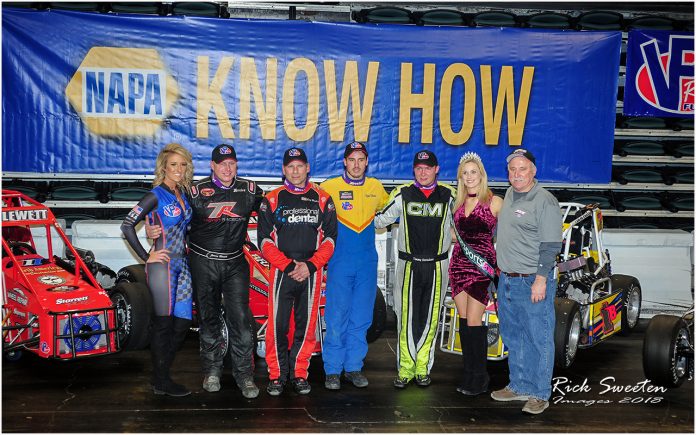 The winning quartet plus the top five drivers in accumulated Indoor Auto Racing Series Fueled By VP Race Fuels point standings, which includes points earned in Friday’s qualifying plus at the previous Indoor Auto Races in Allentown, Pa. in early January, will race in a Dash event Saturday to determine the top nine starters in the Gambler’s Classic.

Paules, a past champion at Mahoning Valley Speedway in both Modifieds and Late Models, outran a determined Andy Jankowiak to take the checkered.


Timmy Catalano, the youngest of the Catalano racing brothers, held off Anthony Sesely for the win, set up when Ryan Flores spun and third place driver at the time, Scott Kreutter was penalized.

The remainder of the 26-car field will be set through a series of heat races that will start the Saturday night race program.

Earlier in the afternoon, Flores, Cornelius, N.C., out qualified 64 other TQ Midget drivers in time trials. Flores’ 8.042 clocking set the standard for the class.

Damon Paul (9.864 seconds) was fastest among 42 Slingshot time trailers while Mike Lapicki, Kyle Herve and Tyler Truex were winners of the trio of ten lap qualifiers. It was Truex’s first time in a Slingshot and first time in an Indoor race.

At the end of the third TQ A-Main Qualifying race, a multi car accident saw driver Mike Tidaback, Brick, N.J., a former Gambler’s Classic winner (2008), sustain injuries. Tidaback was initially unconscious but did became responsive as he was being evaluated at an area hospital. No further information was available on his condition at this time.

Friday’s action set the stage for Saturday’s Gambler’s Classic for the TQ Midgets, a 40-lap feature for the Indoor Auto Racing Series’ top class. Champ Karts and Slingshots will each complete their racing NAPA Know How Weekend action with 20-lap feature races.

Saturday racing begins at 7:00 PM preceded by Fan Fest, an event that allows ticket holders to meet and greet the drivers, receive autographs and snap pictures.

Tickets are available for the Saturday Gambler’s Classic from the Boardwalk Hall Box Office up until race time. Tickets can be purchased in advance through Ticketmaster outlets.