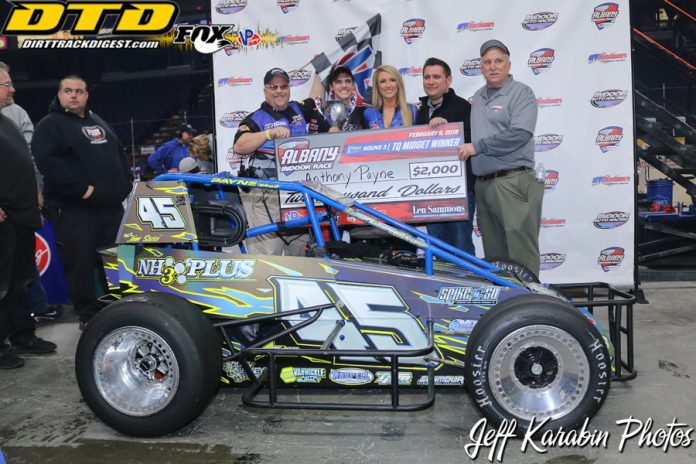 Payne took the lead with nine laps left in the feature after Andy Jankowiak and Erick Rudolph tangled on a restart while running side by side heading into the first turn. Payne, who had been third, managed to miss the crashing pair by inches even as half a dozen drivers behind him piled into the wreckage.

“This is amazing, I can’t even put it into words,” Payne said, his voice choked with emotion. My mother and father, I thank them for making it all possible. Unbelievable.”

Payne struggled to make it into the A-Main. His crew completely changed the set up on the car and it showed in the B-Main which he qualified from.

Then in the feature, Payne’s forward progress was relentless.

Still, it was his accident avoidance skills that carried the day. Two crashes in the first ten laps of the race involved eight and ten cars respectively, all of them in front of Payne. He then missed the leader’s tangle with nine to go, then held off Matt Janisch to prevail.

Jankowiak, who was the leader for most of the race prior to his fateful collision with Rudolph, rallied for sixth trailed by Series points leader Justin Bonsignore, Jonathan Reid, Ryan Bartlett and Timmy Catalano.

The 20-lap Slingshot feature was won by Steve Svanda of Allentown, Pa., who started up front and held off Joe Toth Upper Makefield, Pa., in a race-long battle for the win.

“It’s my first win in a Slingshot Indoor race and it’s amazing. I could retire right now and be happy,” Svanda declared. “Thanks to Joe Toth, who was right behind me and ran me clean.”

Toth, in turn, ran second the whole way but had Kyle Herve, Dan Morgiewicz and Chris Kurtz on his tail at various times in the race. Morgiewicz ended up third with Kurtz slotting in fourth and Danny Buccafusca checkering in fifth.

Four TQ Midget 10-lap qualifiers were taken by Tim Nye over Buckwalter, by Tommy Catalano ahead of Earl Paules, by Jankowiak besting Danner and by Reid, vanquishing Mike Lichty. The only major accident in the heat races occurred with a tangle involving Keith Rocco, Lichty and Marc Johnson, whose car climbed the first turn wall and flipped. He was not hurt.

A pair of 12-lap TQ Midget B-Mains went to Scott Kreutter over Matt Roselli and by Tyler Thompson ahead of Keith Rocco.

Three Slingshot eight lap Slingshot heat races were won by Steve Svanda over Kyle Herve, by Dan Morgiewicz ahead of Austin Silfee and by Joe Toth who superseded Nick DelCampo.

The 12-lap Slingshot B-Main verdict was earned by Kurt Bettler.

After the results from Friday’s TQ and Slingshot features were tabulated, Bonsignore’s seventh place finish enabled him to open a 55 point margin over 14th place finisher Erick Rudolph and a 67 point bulge over race runnerup Janisch heading into the TQ Midget Saturday finale.

Bonsignore can clinch the 2018 Indoor Auto Racing Series Presented By VP Racing Fuels championship with an 11th place finish in the finale even if Rudolph were to win the main event.