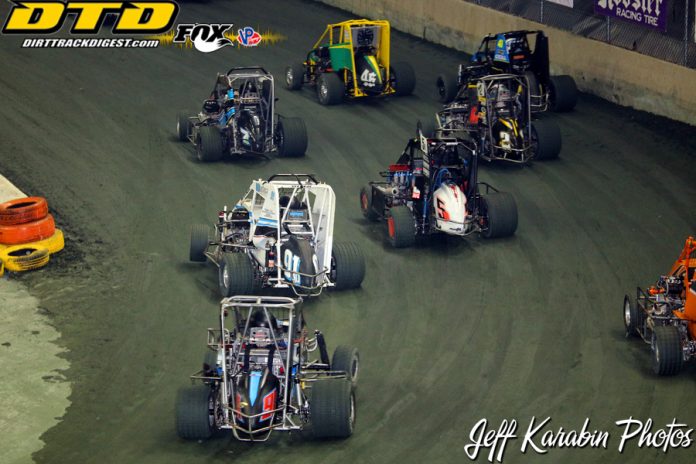 TRENTON, NJ – Tickets are going on sale on Thursday, August 16 at 12 Noon for the Second Annual East Coast Indoor Dirt Nationals set for Friday, December 14th and Saturday, December 15th. The two day event featuring the 600cc wingless Micro Sprints will again be held at the CURE Insurance Arena in Trenton where the wildly successful events were held for the first time in December, 2017.

“The Indoor Dirt Nationals was a race that was talked about all winter,” Len Sammons, Indoor Auto Racing Series promoter said.

One of the reasons for the success of the race was the quality of the racing thanks to an unbelievable dust free banked speedway surface built with rich black clay.

“Everyone was thrilled by the track surface which offered three grooves of racing,” said Sammons.

“The top drivers from all over the northeast thrilled the fans, running low, pounding the outside cushion or sneaking in between. The fast paced presentation left the fans wanting more. This year’s race should be even better.”

“Based on the buzz created by last year’s race, we expect tickets to sell at a rapid rate and encourage everyone planning on attending to place their orders for tickets as soon as they go on sale,” Sammons summed. “Word of mouth from those that attended last year will be our biggest sales people this year.”

A limited amount of premium front-row seats will be available for each night of competition. Saturday’s front row seat will also include a special pit area tour prior to the start of racing action.

Racing starts at 7PM on Friday and 5PM on Saturday.

Title sponsorship for the event is currently being sought, however event sponsors Oliver Communications Group, Hoosier Racing Tires, and VP Racing Fuels are returning to back the race once again. Anyone interested in being a part of this event should contact Danny Sammons at 609-888-3618 or via e-mail at danny@aarn.com.

Information about entering the East Coast Indoor Dirt Nationals, technical and competition rules, and host hotel information will be posted on www.indoorautoracing.com immediately as it is finalized. Drivers who competed in the inaugural event will soon be receiving special entry invitations prior spots being opened to other competitors.