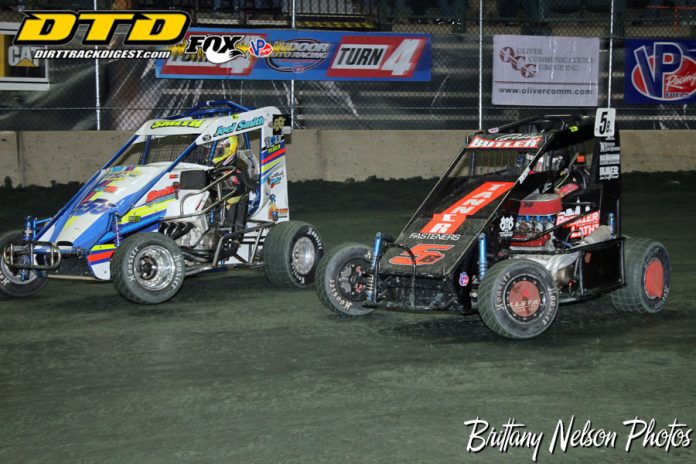 TRENTON, NJ – The second Annual East Coast Indoor Dirt Nationals has been expanded to a third night of racing to accommodate new racers interested in competing. The event featuring the 600cc wingless Micro Sprints will again be held at the CURE Insurance Arena in Trenton, N.J. with racing on Thursday, Friday and Saturday night December 13th – 15th. Racing will start at 7PM on Thursday and Friday, 5PM on Saturday.

Entries will be split into two preliminary night programs on Thursday and Friday evening. The first two nights of action will set the line-ups for Saturday’s main event program where all entered racers will compete.

“We have already received close to 90 entries for the event and its 3 1/2 months away from race day,” said promoter Len Sammons. “The great dark clay racing surface and awesome three wide groove action at the inaugural event caught the attention of racers from different forms of racing that want to be involved. The split preliminary night schedule will allow us the pit space to expand the entry list to 120 cars with 60 competing each night.”

A list of what drivers are presently competing each night is posted and will be updated as they are received at indoorautoracing.com. Entries will be limited to 120, so teams are urged to enter quickly to avoid being left out.

New entries have already been received from many including Ryan Flores, the 2018 TQ Midget Car winner of the Indoor Auto Racing Series race held on the concrete floor of Atlantic City’s Boardwalk Hall. Erick Rudolph, a multi-time TQ indoor winner who currently is second in points on the Super DIRTcar big-block Modified series, is also a new entrant. Another dirt Modified driver, Dom Buffalino has landed a ride to join the action.

The Thursday and Friday events will now feature heat races and four A-Qualifier main events. The top two finishers in each feature will go directly into Saturday, December 15ths main event. Points earned throughout each night programs will be used to lineup alphabet mains for Saturday night’s main event program for all other racers. At the event last year, Wyoming, Delaware’s Luke Thomas rebounded from a problem on his qualifying night to advance from the D-Main to finishing seventh in the A-Main.

An invitational event will also be held on each of the two preliminary nights. The top 20 drivers in the 2017 Indoor Auto Racing Series Slingshot and Champ Kart point standings who accept an invitation to compete will run a heat races and a feature event. The Slingshots will be part of Thursday’s program, the Champ Karts on Friday.

Tickets for the events are on sale through a link at indoorautoracing.com or by stopping by the CURE Insurance Arena in Trenton.

All tickets for the additional Thursday event will be offered as general admission open seating for just $15. Those who have already purchased a Friday night grandstand ticket, or do so by September 21, will receive a general admission ticket for Thursday as an added bonus at a later date in the same method the other tickets arrived. After September 21, all three nights will be sold as a separate ticket.

A range of different price tickets are available for Friday and Saturday action including lower and upper level reserve seats. General admission upper-level seating where children are admitted for just $5 is available as a less costly alternative, but without the guarantee of specific seats.

Saturday’s front row or suite tickets will also include a special pit area tour prior to the start of racing action.

Information about entering the East Coast Indoor Dirt Nationals, technical and competition rules, and host hotel information is as posted on the web-site.

Title sponsorship for the event is currently being sought, however event sponsors Oliver Communications Group, Hoosier Racing Tires, and VP Racing Fuels are returning to back the race once again. Anyone interested in being a part of this event should contact Danny Sammons at 609-888-3618 or via e-mail at danny@aarn.com.