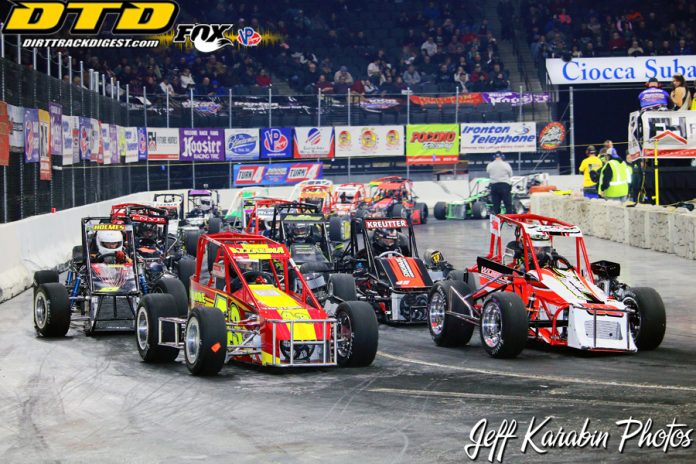 ALLENTOWN, PA – The fourth annual Ironton Telephone Allentown Indoor Auto Race weekend has been set for Friday and Saturday January 4th and 5th. Tickets for the blockbuster event will go on sale on September 19th.

The Slingshots will join the TQ Midgets on Saturday’s docket and the Champ Karts will be part of Friday’s double-header. The two divisions will run qualifying races and feature events both nights.

Danny Buccafusca of Rockaway, N.J. and Eddie Reeder of Phillipsburg, N.J. have won the two Slingshot features held previously at the PPL Center. Past Champ Kart victors include Chris Daley of Pleasant Valley, N.Y., and Cale Ross of Lambertville, N.J.

Tickets for the Allentown races are available on-line through a link at the series web-site, indoorautoracing.com, by calling 610-347-TIXX, or stopping at the PPL Center box office at 7th & Hamilton Street in Allentown.

The Allentown event is the second of four events slated for this year’s Indoor Auto Racing Series Fueled By VP Racing Fuels.

The Allentown race is up next followed by a trip to Atlantic City, N.J.’s Boardwalk Hall on January 25-26, 2019. This event, the NAPA Know How Racing Weekend will feature the 17th running of the Gambler’s Classic for TQ Midgets on Saturday night.

On-line tickets links for all four events, host hotel room deals, entry blanks and rules are available at indoorautoracing.com. Event sponsorship opportunities and other information is available by calling the series office at 609-888-3618 or e-mail danny@aarn.com.