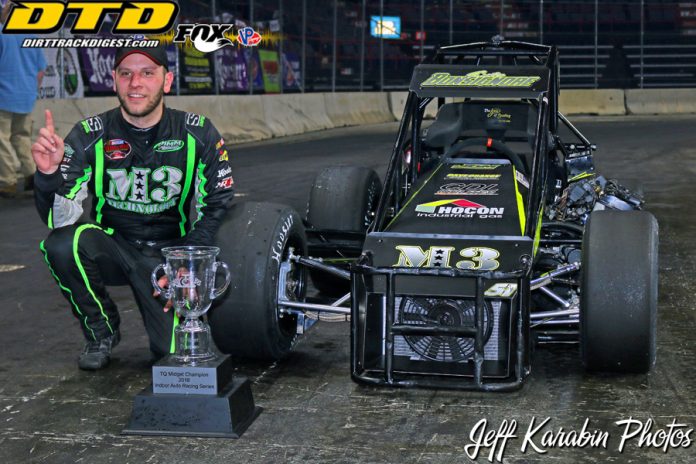 ALLENTOWN, PA – Justin Bonsignore enjoyed a career 2018 season winning the NASCAR Whelen Modified Tour and the Indoor Auto Racing Series Fueled By VP Race Fuels Three Quarter (TQ) Midget championships. The 30 year old driver from Holtsville, N.Y. is hoping to begin his 2019 season as he did this year with a victory inside Allentown, Pa.’s PPL Center on Friday and Saturday, January 4th and 5th.

Bonsignore would fail to win the other four Indoor TQ Midget events in the winter of 2018, but his consistency helped him clinch his first series championships.

When the outdoor season began in March, Bonsignore was already in mid-season form. He scored his first NASCAR Modified win of the season at the Thompson Icebreaker and would sweep all four events at the track, including the season ending World Series. The Long Island, N.Y. native also won two events close to home in Riverhead, N.Y. and solo races in Seekonk, Mass. and Bristol, Tenn. Winning eight of sixteen tour races earned him first NASCAR title.

Bonsignore’s TQ Midget, which like his Tour Modified is black and green and carries the number 51, is currently being prepared for his return to Allentown. The fourth annual Ironton Telephone races will again be held on the concrete floor inside the beautiful PPL Center in downtown Allentown. The headline TQ Midgets will be competing in a complete show Friday and Saturday night, January 4th and 5th. The Champ Karts will run a complete program as part of Friday’s show with the Slingshots joining Saturday’s event.

Three-time Indoor Auto Racing Series champion and former Allentown winner Erick Rudolph of Ransomville, N.Y. hopes to knock Bonsignore off his perch this winter. But first, Rudolph is chasing his own Modified championship on dirt. Currently ranked second on the Super DIRTcar big-block Modified series, Rudolph is seeking top finishes in the final two events of that series at the Dirt Track in Charlotte, N.C. on November 2nd and 3rd. Rudolph, like Bonsignore, hopes to end his outdoor season with a Modified series championship.

Rudolph will then go head-to-head against Bonsignore in Allentown in a clash between the dirt and asphalt super stars.

The Indoor series will then move inside historic Boardwalk Hall in Atlantic City, N.J. for a winner’s trophy Bonsignore has on his bucket list. The NAPA Know How Weekend on Friday and Saturday, January 25-26, 2019 includes the 17th annual running of the Gambler’s Classic. Ryan Flores, of Cornelius, N.C., the 2017 series champion won the 2018 Gambler’s Classic for TQ Midgets and Bonsignore hopes the tradition continues.

The Indoor Auto Racing Series comes to an end with a first stop at the New York State Fairgrounds Exposition Center in Syracuse, NY on Friday, March 8 and Saturday, March 9. The Syracuse program will include two complete programs with qualifying and feature events for the TQ Midgets, Slingshots and Champ Karts on both nights to decide the series championship for all three divisions.

Tickets for the Allentown races are available on-line through a link at the series web-site, indoorautoracing.com, by calling 610-347-TIXX, or stopping at the PPL Center box office at 7th & Hamilton Street in Allentown.

Tickets for Atlantic City are available at the Boardwalk Hall Box Office, online at www.ticketmaster.com.

Select tickets for Allentown and Atlantic City are available at the Area Auto Racing News/Len Sammons office at 609-888-3618 for tickets Monday through Friday from 9 to 4:30. Purchase your tickets together and pay only one shipping charge!

Advance tickets for the Syracuse event will be available in the coming weeks.

The event featuring the 600cc wingless Micro Sprints will again with racing on Thursday, Friday and Saturday night December 13th – 15th. Racing will start at 7 PM on Thursday and Friday, 5 PM on Saturday.

Information, including ticket and hotel links, is available at indoorautoracing.com or by calling the series office during regular workings at 609-888-3618.