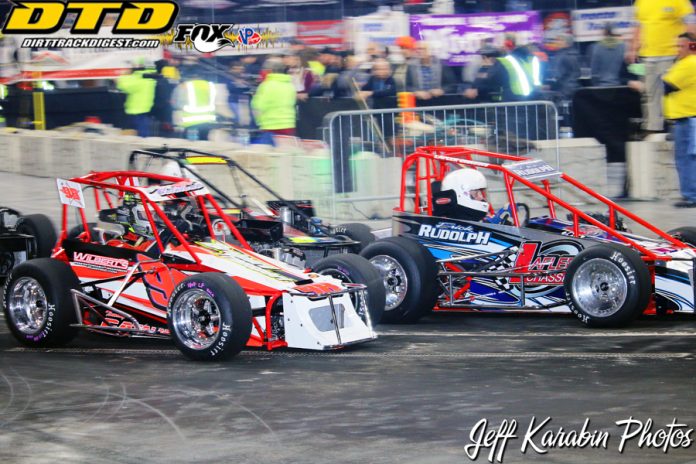 The first of three series races to be held on the concrete floors of arenas in three different states will be at the PPL Center in Allentown, PA. The Ironton Telephone sponsored events will be held on Friday and Saturday January 4th and 5th with complete programs including qualifying races and feature events both nights.

“I’ve won some pretty big races up north, but this is the first time I ever won in a Tour Modified,” Catalano, of Ontario, NY, said. “So this is a huge win for us. My next goal is to win an indoor TQ Midget event.”

Catalano and his family-owned team traveled 14 hours – each way – travel from suburban Buffalo, NY to Myrtle Beach to race. This past season they competed on both the Race of Champions and NASCAR Whelen Modified Tours where he won the Rookie of the Year award.

Catalano, who has competed in the Indoor Auto Racing Series for the past several years, has something new up his sleeve for the 2019 season.


He has in the past has run both a Lafler chassis car and an experimental Tim Nye chassis. This car will be his first effort in a TQ Midget with ten, not 13, inch tires.

“I’m building a new car for the Indoor Series,” Catalano revealed. “A wide tire car. We think a 10 inch wide tire is the way to go.”

Catalano will breaking from the norm building a car based around the smaller wheels, something Andy Jankowiak used to win the series finale in Albany, N.Y. in February of 2018.

Though Series rules allow for two different types of wheels, a 10’ and a 13, the majority of the TQs in recent years have been 13’ wheel cars.

The young driver, a Rochester Institute Of Technology (RIT) student, has taken an active role in the development of the new TQ Midget.

Racing against as many as 60 rival drivers and teams, Catalano will be going to post in all three of the series races at Allentown, PA, Atlantic City, NJ and Syracuse, NY this winter.

Catalano and Jankowiak will be joined by several other Modified Touring Series regulars in pursuit of victory.

Timmy Solomito, a close friend of Bonsignore and a fellow competitor on the NASCAR Tour from Islip, NY. is also entered.

Timmy Catalano, Tommy’s younger brother, will also be an entrant. Timmy also competed on the Indoor series, the RoC circuit and in local Sport Modified in 2018.

Teenager Andrew Molleur of Shelton, CT., who ran in several NASCAR Whelen Modified and Tri Track Open Modified Series events late in 2018, is also fielding a car for the three-state series for a second season.

The Slingshots will join the TQ Midgets on Saturday’s docket and the Champ Karts will be part of Friday’s double-header. The two divisions will run qualifying races and feature events both nights.

Information, including ticket and hotel links, is available at indoorautoracing.com. Other information and select tickets to all event are available by calling the series office during regular working hours at 609-888-3618.

Tickets for the Allentown races are also available by calling 610-347-TIXX, or stopping at the PPL Center box office at 7th & Hamilton Street in Allentown. Those wishing to avoid online fees may purchase directly at the Box Office, but are encouraged to do so in advance to avoid possible box office lines the day of the event.

The Allentown Indoor Auto Racing race will be preceded by the second annual East Coast Indoor Dirt Nationals, a non-point event, set for Thursday, Friday and Saturday, December 13-15, 2018 inside the CURE Insurance Arena in Trenton, NJ.