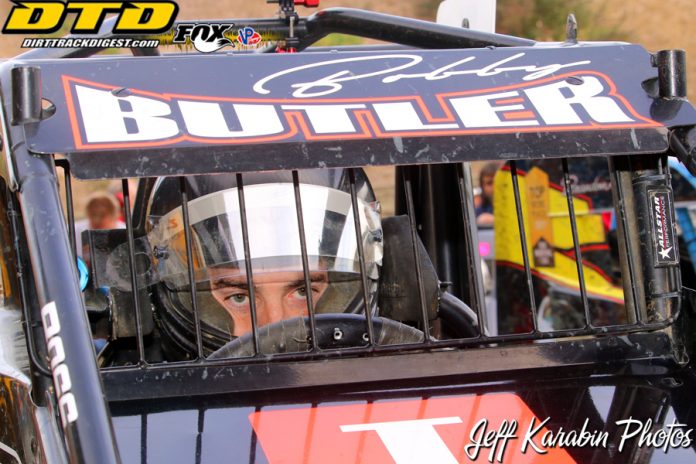 TRENTON, NJ – In a racing era where specialization is ever escalating, Bobby Butler, 30, of Milford, NJ, is breaking the mold entering one car for Indoor Auto Racing Series events first on both dirt then on concrete.

The Dirt track Modified ace will first compete in the second annual 600 Micro Sprint East Coast Dirt Nationals on a banked clay oval to be built inside CURE Insurance Arena in Trenton for racing on December 13, 14 & 15, 2018.

After the checkered flag has fallen, Butler will change his 600 Micro over to competitive form to be raced on the concrete floor inside Allentown, PA’s PPL Center TQ Midget races on Friday and Saturday, January 4-5, 2019.

“I was competitive in the same car last year at Trenton,” Butler reminded. “I was running sixth when the big tangle happened with the leaders. I’m not saying I would have won, but I started pretty far back and got to the front pretty quick.”

Butler will be driving a BOSS chassis Micro which he describes as “an older car” that is owned by Bill Butler of Saylorsburg, PA. Curiously, these two Butlers are not family-related.


The entry list for the Indoor Dirt Nationals has been filled with 120 race teams clamoring for the chance to run on the black clay speedway.

It’s the next phase of Butler’s Indoor season that is the most unusual. The dirt will be cleaned off the Micro and the car will be prepped for the Allentown concrete race.

“I have done a mock-up of the way we want to set the car up for concrete,” Butler said. “The things we have to change are the ride height, the shocks and springs, and the front spindles. It can be changed over in two nights.”

Though Butler is the only entry that will run the same car on both dirt and concrete, several other racers have entered both events with purpose-built cars for each.

Erick Rudolph, Ransomville, NY, a three time Indoor Auto Racing Series champion, will be driving a 600 Micro owned by King Of Prussia, PA’s Tom Fraschetta at Trenton on the dirt. The runner-up in this year’s Super DIRTcar Big-Block Modified series will then will saddle up for the three indoor races that will follow on concrete floors of arenas in three different states. In these races he’ll be running a TQ Midget built by Mark Lafler.

This year’s schedule calls for heat races with passing points and four A-qualifier feature races for split fields on both Thursday and Friday night. On Saturday, with all 120 cars on hand, Alphabet mains are scheduled, with racers having the opportunity to advance from G, F, E, D, C, and B, will precede the 50 lap A-Main paying $5,000 to win. Racing will start at 7 PM on Thursday and Friday, 5 PM on Saturday.

Information, including ticket and hotel links, is available at indoorautoracing.com. Tickets are also available at the box offices at each arena. A post-race gathering each night after the races will be held at Chickie and Pete’s, a renowned area Sports Bar in nearby Bordentown, N.J. with special bar and food discounts along with the kitchen open late.