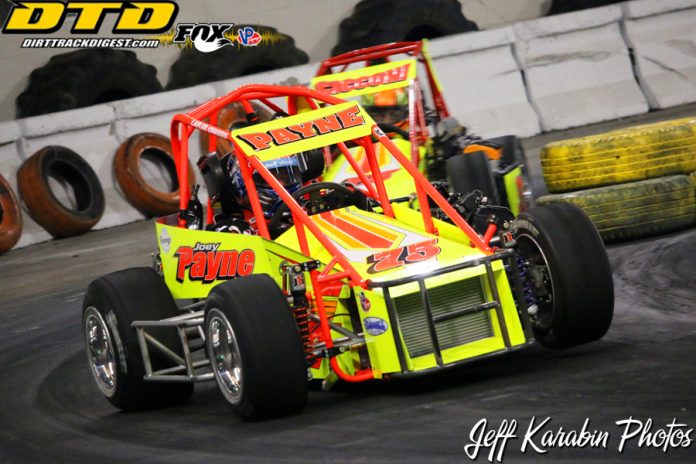 SYRACUSE NY – When the green flag drops on Friday and Saturday, March 8th and 9th at the New York State Fairgrounds Exposition Center in Syracuse, N.Y., two of Oswego Speedway’s most popular and accomplished Supermodified drivers, Joey Payne of Fairlawn, NJ and Tyler Thompson of Oswego, will be ready to hit their throttles full blast.

Nicknamed ‘The Jersey Jet”, Payne, has won four career Supermodified features at Oswego in his career, three non-wing events and one ISMA race. More importantly, Payne is the all-time one lap non wing track record holder, setting the standard at 15.802, in 2014.

At Syracuse, Payne will be driving a car that is a proven winner. His son Anthony drove the same No. 45 to a win the first ever Indoor Auto Racing Series event inside Albany, N.Y.’s Times Union Center last February.

Thompson, who just turned 17, is a throwback to the “race anything, anywhere” mentality that was the rule rather than the exception in racing years ago.

Thompson raced a DIRTcar Sportsman Modified, a wing and non-wing Supermodified, a go-kart and an ultra-quick TQ Midget in 2018. The past season was a breakout campaign for Thompson, who won the DIRTcar All-Star Invitational Sportsman Championship at the Dirt Track in Charlotte, N.C. He also claimed both the Oswego and ISMA Supermodified Series Rookie of the Year titles; the first driver since 1992 to accomplish that dual feat.

“The TQ is extremely quick and it is tight racing with some of the best drivers in the country.”

Thompson will be in the Simmons Racing No. 98T he has run throughout the 2019 Series at what will almost be a hometown event for him. He’ll also be coming off a trip to Florida where he made his DIRTcar big-block Modified debut at Volusia Speedway Park.

The two-day Syracuse event will include two complete programs with qualifying and feature races each night for the TQ Midgets, Slingshots and Champ Karts. Doors open at 6 PM on Friday night with racing beginning at 7:30. Doors open at 5:30 PM on Friday with racing at 7pm. Fans will be able to visit the pit area to see the cars and meet the drivers each night until 30 minutes before the racing begins.

The first Indoor Auto Racing Series event in Central New York will be the fourth and fifth legs of the series. Both races will offer equal points in helping decide a tight point race between former champions Erick Rudolph and Justin Bonsignore. Rudolph was the 2018 point champion at the nearby Land of Legends Raceway in Canandaigua, N.Y. and he finished second in the Super DIRTcar Big-Block Modified series. Bonsignore first won the Indoor TQ Midget title than the NASCAR Whelen Modified Tour championship.

Another all Empire State team drawing attention in the recent Atlantic City race was 2017 Albany-Saratoga Speedway dirt Modified champion Marc Johnson of Guilderland. Driving an all new car owned by Ken Sebring of Albany, and built by Kluth Motorsports of Holley, Johnson was extremely competitive.

Three other highly regarded TQ chauffeurs, Eddie Strada of Hamlin, PA, Matt Janisch of Nazareth, PA, and Tim Buckwalter of Royersford, PA are among the top ten in Series points.

Exposition Center opened during the recent Labor Day Fair. The huge, state of the art $33 million project was built without obstructing poles. Grandstand seating will be available on both the front and backstretch. From their seats, fans will able to be able to see the entire speedway plus the pit area which will be located on the far side of the building. The building has a different seating configuration than other venues the series stops at in that grandstand patrons enter at track level, then walk up to seating areas.